Any chance to get away from the bustle of the city is exciting, but the folks in Riverside know this park represents something more — staunch determination and an unwavering vision from residents.

Atlantan Keith Sharp and his wife, nicknamed Riverside Kate, have been dreaming of a neighborhood park since the early 1990s. The idea was first broached during a neighborhood meeting where the folks with the PATH Foundation proposed creating a multi-mile trail alongside the Chattahoochee River. 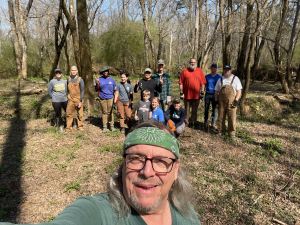 For nearly eight years, Sharp (front) and neighbors meet once a month to clear invasive species and maintain the neighborhood trails. (Photo courtesy of Keith Sharp)

Those plans fell to the wayside, but the proposal was reinvigorated during the 1997 American Society of Landscape Architects national meeting hosted in Atlanta. As a thank-you for hosting the conference, the city received several pro-bono plans for local parks, including what would eventually become Lower Paul Park. The name comes from the road that the park borders, Lower Paul Ave.

While the plans were there, the project still needed land, funding, and someone to spearhead the initiative. As a lover of the great outdoors, Sharp was determined to see this plan to fruition.

“I don’t play golf on Saturday mornings; I go into the woods,” he said.

In 2009, the neighborhood faced what Sharp calls “the great flood,” leaving about 17 homes damaged and vacant. The following year, with the help of Park Pride and The Conservation Fund, they were able to secure over half of those lots.

Fast forward to early March 2022, and the city has officially bought the space needed to turn nine acres in Riverside into a park bordering Atlanta’s rushing river. But there’s still a lot to be done.

Park Pride, a local nonprofit that helps communities create and elevate their parks, is spearheading the park visioning effort. Director of Park Visioning Andrew White describes the process as “democratic.” 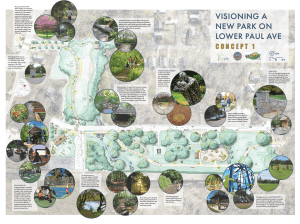 The nonprofit guides the planning process by enlisting experts to craft the plan with close collaboration with community members. The organization has created two early renderings of what Lower Paul could look like by working with a small group of resident advisors. Residents are also encouraged to give their input via community meetings or an online form.

White noted that the community’s top priorities for the space are: safe and welcoming, options for new activities but with an emphasis on “preserving the natural elements that make the place special.”

“We’re really trying to do our best to balance those issues of preservation versus new uses,” he added. 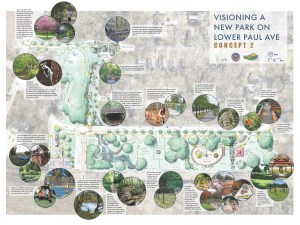 Executive Director Michael Halicki added that maintaining that connection to nature, and preserving the ecosystem around the river, is key.

“We really have this thirst for access to nature since the pandemic,” he said. “People are not looking for fully built out areas that have a lot of impervious surfaces. They want to connect with nature.”

The park is open to the public today as a green space, but the project’s complete timeline could span around three years, with a price tag of about $9 million.

Pioneering a new park is a feat, but Lower Paul Park will eventually include a nine-mile trail alongside the river, serving as a piece of a larger jigsaw puzzle known as the Chattahoochee RiverLands initiative.

The walking trail, called the Riverwalk, has always been part of the proposal, but these large-scale efforts take time. The park won’t have direct access to the river, but the trail network will.

“This [park] is the first domino of about a dozen different dominoes that will fall that will enable us to have the first mile of Riverwalk Atlanta,” Sharp said. He expects to secure that first mile within a year.

The Chattahoochee RiverLands project is a multi-generational initiative by The Trust for Public Land (TPL), an effort to create 100-miles of an uninterrupted linear network of trails, parks and green spaces from the Buford Dam to the Chattahoochee Bend State Park. 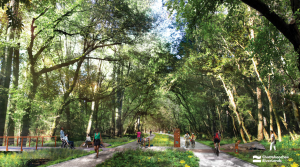 The idea here is to reimagine how Atlanta regards the river, which has a somewhat tumultuous past.

“The Trust for Public Land got involved with the Chattahoochee River because it was listed as the most endangered river in America 30 years ago,” TPL’s Georgia, Alabama State Director George Dusenbury said. “[With the RiverLands project,] you’re reminding people that the Chattahoochee is there. You are showing them that this is a river in recovery; it really is beautiful, safe and great to experience. You are connecting them to the river in a way that will make them advocates and proponents.”

And once Lower Paul Park’s Riverwalk is established, it will serve as one piece of the greater effort.

“From an equity perspective, from an access perspective and impact perspective, the Trust for Public Land believes that the Cobb Atlanta section of the RiverLands is the most vital part of its success,” Dusenbury said. “So many people live in Cobb County near that part of the river, who have been cut off from the river for so long. That’s starting to change.”

Dusenbury said the organization has its sights set on a plan to secure 19 miles for the RiverLands initiative within the next decade.

But the folks who have spent countless hours advocating for Lower Paul Park, the Riverwalk and the RiverLands are sure that the final picture — a new neighborhood park and a connection to 100 miles of green space and trails along the Chattahoochee — will be worth the wait.

“There are so many pieces of the puzzle that I always laugh when I’m asked the question, ‘So when will it be finished?’” Sharp said. “There are over a dozen sub-projects that are all pieces of the puzzle. But the dominoes are all stacked up and ready to fall into place to complete the picture.”