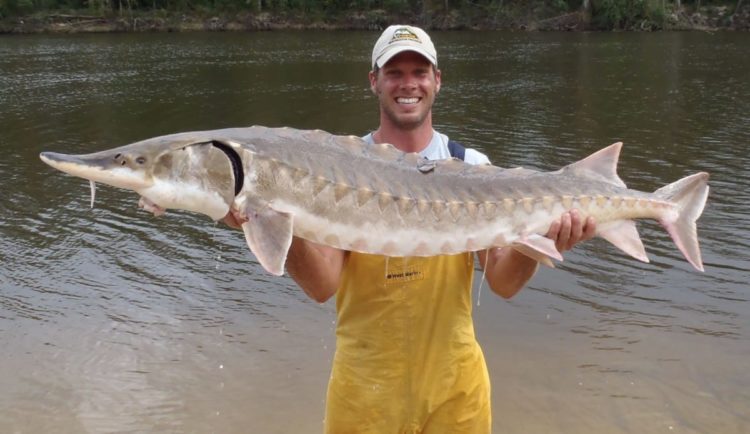 The Gulf sturgeon is a prehistoric fish that's listed as a threatened species. Its fate is expected to be slightly adversely effected by a proposed water management plan for the Apalachicola-Chattahoochee-Flint River Basin. Credit: gcrl.usm.edu

For climate enthusiasts, a new federal report has it all – from discussion of climate change to rising sea levels, from job creation to the fate of a fish described as a living dinosaur. 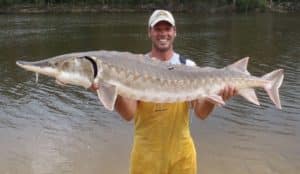 The Gulf sturgeon is a prehistoric fish that’s listed as a threatened species. Its fate is expected to be slightly adversely effected by a proposed water management plan for the Apalachicola-Chattahoochee-Flint River Basin. Credit: gcrl.usm.edu

The short take-away from the report is that it doesn’t seek to curb metro Atlanta’s water consumption from Lake Lanier.

This document is not part of the tri-state water litigation now being considered by a special master appointed by the U.S. Supreme Court. The bench trial concluded Dec. 1 after more than 82 hours of testimony, according to the docket sheet.

This document is the first update in some 50 years of the manual the U.S. Army Corps of Engineers uses to manage water usage and drought response in the Appalachicola-Chattahoochee-Flint river basin. The basin extends from the headwaters of the Chattahoochee to Apalachicola Bay, Florida.

As such, the manual is a fairly dry read.

It’s heavy on the kind of technical language that would be expected to emerge from eight years of research on development, jobs and water usage in the basin. Just the list of abbreviations is six pages. 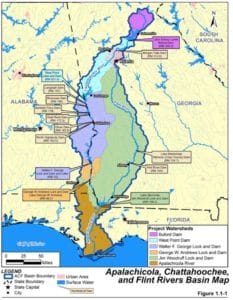 The new plan to manage water usage and drought response from North Georgia to the Gulf of Mexico is expected to be in place in early 2017. Credit: sam.usace.army

But nestled within the document are a number of fairly dramatic statements that speak to the extent man’s impact on the Earth and, in particular, this region.

The report affirms that global warming is occurring and observed of the rate of warming:

Fossil fuel combustion accounts for the vast majority of the increase in carbon dioxide in the atmosphere. The report labels carbon dioxide as a direct greenhouse gas:

While sea levels have always fluctuated, the sea level is rising, according to the report.

Since 1963, the global sea level has risen at a rate of 0.07 inches per year. Near Apalachicola Bay, a monitoring station that’s been in place for more than 40 years shows an increase of about 0.05 inches per year between 1970 and 2010.

More than 90 percent of all jobs in the river basin are in the private sector. Per capita income is the highest in metro Atlanta. Credit: sam.usace.army

Incomes vary widely. Per capita income ranged from a low of about $14,000 per year in the poorest counties to a high of about $36,000 a year in metro Atlanta, according to the report.

Fish and wildlife will face varying degrees of adverse changes if the plan is implemented, according to the report. The Gulf sturgeon would face “slightly adverse changes.”

The Gulf sturgeon is 200-million-year-old fish species, according to the U.S. Fish and Wildlife Service. It’s habitat was disrupted by the construction of dams. The Gulf sturgeon now listed as an endangered species. Here’s how the FWS describes the fish:

“The Gulf sturgeon lives in the northern Gulf of Mexico, bays, estuaries and in major rivers in Florida, Alabama, Mississippi and Louisiana. The gulf sturgeon spends most of the year in freshwater, where it reproduces, and migrates to saltwater in the fall. Adult fish are bottom feeders, feeding primarily on invertebrates in the Gulf of Mexico and its estuaries. In early spring, the gulf sturgeon return to breed in the river system in which they hatched.”