Marian Liou sits at what she calls “the intersection between planning and arts and culture.” It’s at this junction where she ponders, “Who is Atlanta? What direction are we headed?”

These questions aren’t new for Liou, who has been a community advocate since 2014 when she moved to the Buford Highway area, famous for its diversity and rich culture.

At the time, conversations were floating around about renaming or restructuring the area. During these discussions, she became frustrated by the lack of true community input, which seemed to be a box to check rather than an integral piece of the plan.

“It felt like these plans were being done to a really amazing and unique community but without any real community input,” she said.

Liou also felt like the Buford Highway community was pigeonholed, with all praise focused on happy taste buds but not much else.

Thus, We Love BuHi was born, a venture that began as an Instagram account and has grown into a nonprofit organization.

The thing is, she created the account so that there wasn’t just one voice telling the story for others. Liou recognizes that every story can’t be told, but that doesn’t stop her from trying. 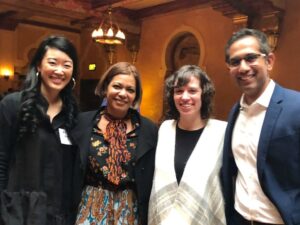 Liou joined the ARC in 2019 as the Community Engagement and Arts Program Manager. She parted ways with We Love BuHi, but the nonprofit continues to advocate for and give a platform to the neighborhood’s multicultural residents.

Liou’s community work has shaped her approach to engagement and the power of storytelling.

Thinking back to her neighbors who didn’t have a say in their community, she wants to reimagine engagement.

Liou sees traditional engagement as surface-level, like asking a group of people for their input on decisions that have already been made. Instead, she considers, “How does engagement become a multi-way process rather than just one unidirectional, unilateral process?”

But once you have the engagement, how do you make a change?

At times, it feels like Liou’s stuck in limbo between her two sides, one as a community changemaker and another as an employee at a large government institution.

The standard approach to change is incremental, taking it one step at a time.

Liou is in a state of conflict with herself, deciding if this is best.

“You can’t put a person of color into a position and expect that the results will change if the structure of the system is the same,” Liou said. “We have to center these groups that we’ve excluded in the past. Those are the groups that we should be building our community engagement efforts around.”

On the other hand, every move can’t be big and flashy, and “maybe incremental change is what works.”

But there’s one thing Liou is sure of — the importance of listening to every voice you possibly can.

“There should never be one spokesperson, especially in a community that is made up of so many different communities, and so many different people and stories and histories and backgrounds,” she said. “I hope that that’s what we continue to amplify, just how diverse metro Atlanta is.”