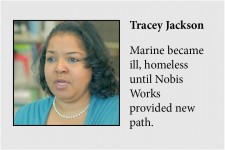 Tracey Jackson was a Marine with dreams of a career in medicine until she had an anaphylactic reaction that left her disabled, unable to work, and ultimately homeless. Tracey’s Moment with Atlanta nonprofit Nobis Works not only got her off the streets, it set her life on a new path of success.

Prior to her Moment, Tracey served in the United States Marine Corps, was scheduled to serve in the Gulf War and received a series of medical injections in preparation. Ultimately, she did not get shipped overseas, so she planned to go to medical school and, in anticipation of that, began studying nursing.

During her rigorous nursing classes, Tracey experienced an anaphylactic reaction that sent her into seizures. The unanticipated and severe reaction changed the rest of her life. She isn’t positive the shots she received in the Marines caused her reaction, but she knows of other soldiers who received the same shots and had similar debilitating symptoms.

Tracey’s short-term memory was severely affected and she was no longer able to continue her nursing studies that she had hoped would propel her career. Even more disappointing, her marriage dissolved and she was forced to move away from her children. She soon lost her job and was unable to find other work to accommodate the disability she struggled to overcome. Eventually, Tracey became a homeless a veteran in Atlanta.

“I think many people always look at people being homeless because of drugs or something of that nature – it could be any situation and any person could be homeless at any second,” she told us in our accompanying Moments HD video.

In 2006, the VA homeless program in Atlanta referred Tracey to Nobis Works. The meeting would change the path of Tracey’s life – this time for the better.

“After a 10-minute interview they told me to go in the next room to fill out some paperwork,” she said. “I said, ‘For what?’ and they said, ‘For your job.’ ”

Tracey has been employed with Nobis Works for eight years since that day. She started out working in Nobis Works’ contract with the U.S. Housing and Urban Development (HUD) office and described the position as, “A simple job of just filing.”

One day, while filing away papers according to states’ numerical prefixes used in the office, she made an exciting self-discovery.

The discovery eventually made Tracey eligible for other positions at Nobis Works and restored her confidence in her abilities – which mirrors what Nobis Works strives to offer all its employees with disabilities and other barriers to employment.

According to the Nobis Works website, the nonprofit has helped more than 24,000 individuals “find dignity and workplace success” since its founding in 1977. Named after the Atlanta Falcons first draft choice in 1966, Tommy Nobis, the organization helps individuals with disabilities enter or re-enter the workplace and gain the independence that is often sacrificed with a disability. The firm also contributes to the business community by providing highly productive workers that often handle tasks in which other employees quickly lose interest.

For Tracey – and many others – Nobis Works’ greatest contribution isn’t the computer or call center skills training for a job, it’s the emotional support provided.

“They were there for me emotionally,” Tracey said. “They were extremely supportive – any other employer would have fired you.”

Today, Tracey works in the Environmental Protection Agency mailroom downtown where she processes “accountable mail” – mail that has to have a signature and is tracked from the time it enters the building until it reaches its designated recipient.

Tracey’s thankfulness for her steady job has led her to reach out to others in difficult life circumstances. On Saturdays, Tracey volunteers with her church helping the homeless and shares her experience as evidence of her understanding, but also as a glimpse of hope. She’s also back in touch with her family and involved with her children.

“I know that there is always hope for any and everyone – I know that without a doubt,” she said. “When someone feels down and out, I tell them my experience, or sometimes they may have an experience way worse than mine, but I know there is hope and I can speak of something positive to help them.”

“I look back and think I could be just like some of the people at the park that are unemployed and have a hopeless outlook on life,” she said. “If it wasn’t for that Moment in 2006 when I became employed with Nobis Works, my life would not be what it is now.” 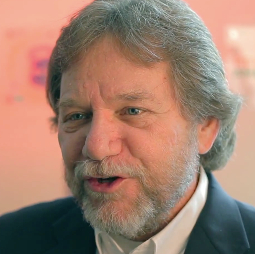 Next week in Moments: Bill Bolling

Next week in Moments: Bill Bolling, founder of Atlanta Community Food Bank, on the day he discovered the power of and need for food and service.