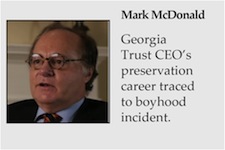 Mark McDonald and his childhood friends were bicycling to their favorite fishing pond nestled in a grove of trees outside their historically rich hometown of Montgomery, Alabama, when they made a startling discovery.

The future CEO of the Georgia Trust for Historic Preservation and his friends suddenly faced a harsh reality that had struck many historical southern towns before and since – development. The boys stood in silence as they watched as a large construction tractor bulldoze their beloved trees that had always shaded their favorite getaway.

They soon learned their boyhood fishing spot would be transformed into a new area of Montgomery with a housing subdivision of ranch houses. The friends pedaled home dispirited.

“I was really powerless to do anything about it,” Mark said. “It was really a terrible, tragic feeling to see this happening to a place that I loved.”

The development may have come as a surprise to Mark and his friends, but it was not a surprise for Montgomery. As seen in many cities in the 1970s, people were moving out of dwindling downtown areas and moving into subdivisions outside of the city near newly developed malls and commercial strip centers. This meant pastoral spots such as the fishing pond had to be cleared to make way for the new houses and their pristine lawns. In the process, historical sites would be lost.

The Moment Mark saw the bulldozers clearing the trees planted a seed that would bear fruit years later. He attended Emory University and graduated with a law degree from the University of Georgia. While practicing law, he began to read about a growing preservation and environmental movements that reconnected with the powerlessness he once felt about the fishing pond. 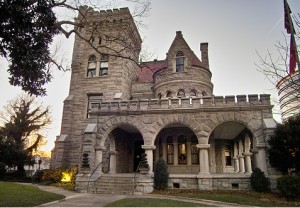 “After I got out of law school, I realized that there were things that could be done about this,” he said in our accompanying Moments video. “The historic preservation movement was taking hold.”

The historic preservation movement began after World War II, as prosperous economic times threatened historical landmarks with rapid development of new commercial and residential buildings. Early activists fought tirelessly to preserve buildings that defined our nation’s political and civic history and their efforts gradually gained momentum through the decades. In the late 1980s and 1990s, the activists began to encounter less resistance and opposition to their pleas as larger percentages of the voting public voiced their agreement for the cause.

At 29 years old, Mark left the practice of law, moved to North Carolina and began work with the Historic Salisbury Foundation. During his first professional position in historic preservation, Mark had the opportunity to chip away at the powerless feeling he once felt and found success in maintaining the character that graced historic neighborhoods and landmarks.

“It’s been a great career for me – a wonderful, very fulfilling time I’ve spent working in preservation,” he said.

Mark continued his career, gaining 25 years in nonprofit and business experience working at The Mobile Historic Development Commission in Mobile, AL, and serving as the Executive Director for Historic Savannah Foundation. Now in his third leadership role in historic preservation in the Southeast, he serves as the president and CEO of the Georgia Trust for Historic Preservation.

The Georgia Trust for Historic Preservation has grown to become one of the largest, statewide nonprofit organizations in the country. The Trust not only saves and preserves endangered buildings across the state, it provides educational programs open to the public as well as for statewide teachers to spread the message about the importance of preservation.

“I’ve joined a community of people who feel as passionate about this as I do,” Mark said. “This many people all working together, we have had an impact on changing our culture. 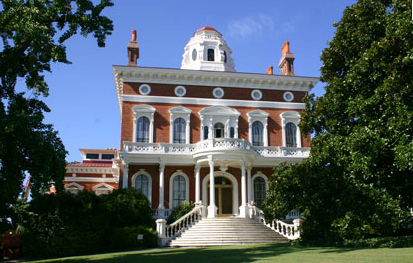 The Georgia Trust for Historic Preservation recently unveiled its 2013 Places in Peril of sites that they hope to build the type of momentum that could prevent them from being bulldozed and instead, to restore them as historical references of the culture of Georgia.

One of Mark’s goals as the nonprofit’s leader is to make preservation more accessible to larger portions of the community, to shine the light not only on buildings, but also significant tracts of land, such as landscapes and industrial sites whose topography bear witness to their previous uses in past centuries.

The Trust maintains offices in three cities, working in and restoring historic Rhodes Hall in Midtown Atlanta, the Hay House in Macon and its design office in Athens. Raising funds to support its work and increasing membership to growing numbers of supporters, Mark and his team’s efforts through the state do their best to preserve for future generations what he and his friends felt powerless to do for their childhood fishing pond. 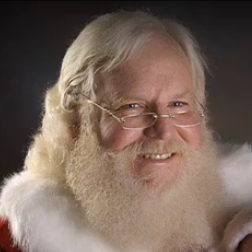 Next week in Moments: Santa!

Next week in Moments: Santa, on when he started his present delivery mission.
Video by Francis McDonald. Research and writing assistance by Bailee Bowman of Schroder PR.