The MARTA Board of Directors approved a resolution authorizing MARTA to enter into negotiations with a development joint venture for the transit-oriented development (TOD) of the Bankhead rail station, the western terminus of the Green Line. The joint venture is led by the Peebles Corporation, one of the largest minority-owned real estate development firms in the country, with a deep track record of public private partnerships, and includes co-developer Exact Capital out of New York and local firms Third & Urban and Bolster Real Estate Partners. 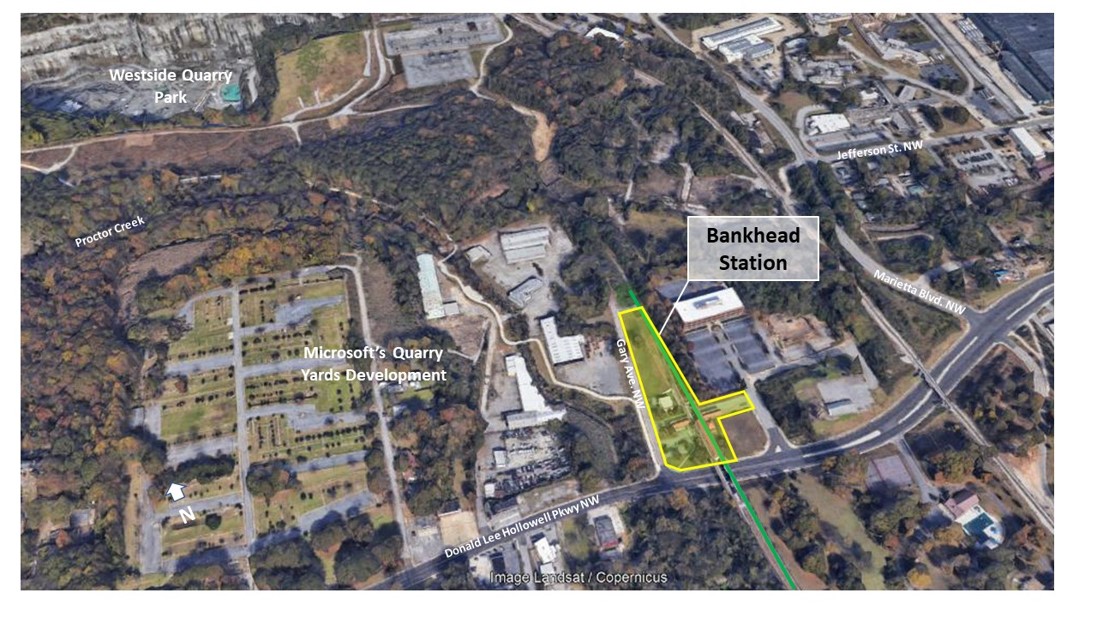 The Bankhead TOD is located on just under five-and-a-half acres of land, along with air-rights above the station itself, which sits at 1335 Donald Lee Hollowell Parkway. The rail station is adjacent to the Microsoft proposed 90-acre campus development and is a half-mile southeast of Westside Park. Other nearby development includes the Atlanta BeltLine Westside Trail and the Proctor Creek Greenway in the historic Grove Park community.

The development plan includes 495 multi-family housing units, with 148 of them designated as affordable at 80 to 120 percent of the area median income by zip code. The concept also includes office and workshare space, retail and a hotel, along with over an acre of open space. To further support the type of mixed-use density that defines successful TODs, MARTA, with support from Atlanta City Councilmember Dustin Hillis, had the station rezoned to Mixed Residential Commercial District 3 (MRC-3), to align with the zoning applied to the Microsoft property and the zoning presented in the City of Atlanta’s Transit-Oriented Development Plan, which recommends that nine of MARTA’s rail stations undergo a proactive rezoning to support higher density at transit stations.

“Bankhead Station is in a part of Atlanta that is undergoing significant growth and land use changes. Our rezoning efforts with the City and the station’s location within a Federal Opportunity Zone make this TOD an incredible opportunity to provide affordable housing and other community amenities convenient to transit,” said MARTA Interim General Manager and CEO Collie Greenwood.

The Bankhead Station transformation project is part of MARTA 2040, a decades-long several billion-dollar transit improvement and expansion program. The project includes a platform extension from two-car to eight-car capacity (matching the capacity of the other 37 rail stations), and other modifications necessary to accommodate the subsequent increase in rail cars and customers. Last year the Georgia General Assembly approved a $6 million appropriation toward the transformation of Bankhead Station, in support of the economic development taking place in surrounding areas.