MARTA board chairman, Robbie Ashe, announced that at Thursday’s board meeting, Parker’s contract would be extended by another two years. Then, almost as an after-thought, Ashe added – “assuming the majority of the board votes for it.” 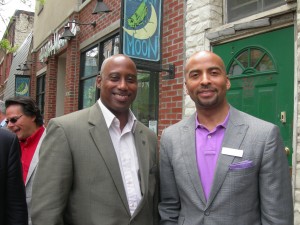 Parker joined MARTA in December 2012 – signing a five-year contract. If it is approved by the full MARTA board, the extension will keep him as general manager and CEO to 2020.

About two-thirds of the board members were present at the breakfast, which was held at MARTA’s headquarters, leading Parker to joke earlier that a quorum was present.

Ashe credited Parker with moving MARTA from a “good transit agency” to a great transit agency, and that the board wanted to show its commitment to his leadership.

During his presentation to business and government leaders from metro Atlanta and the state of Georgia, Parker said MARTA had stabilized its finances and had been putting its own house in order by increasing service and improving its image and reputation.

“For the first time in seven to eight years, MARTA is seeing ridership go up,” Parker said. The system, which is celebrating 35 years operating as a combined bus and rail service, is getting “people to think differently about their transit system.”

MARTA reported a 9.7 percent increase in ridership during the first quarter of the current fiscal year compared with July, August and September of 2013.

In November, Clayton County voters overwhelmingly approved a 1-cent sales tax (74 percent to 26 percent) to join MARTA, the first new county to do so since it was first approved by Fulton and DeKalb counties in 1971.

Then on Dec. 30, the Atlanta Streetcar began service in downtown Atlanta, the first expansion of a new rail in the region in a number of years.

Despite those successes, Parker said “MARTA is at a crossroads.”

When it comes to supporting MARTA and public transit, Georgia ranks at the bottom among states with major transit systems.

Parker said that going forward, it was important for the State Legislature to permanently remove the 50/50 restriction to split its sales tax revenue evenly on capital and operating expenses – despite its needs; and to make sure that any new transportation revenue plan includes funding for transit.

In closing out the breakfast, Atlanta City Council President Ceasar Mitchell congratulated Parker on getting an extension on his contract – provided it’s approved by the MARTA board.

“We will have much more of your wonderful sense of humor,” Mitchell told him. “You are the funniest serious guy that I know.”