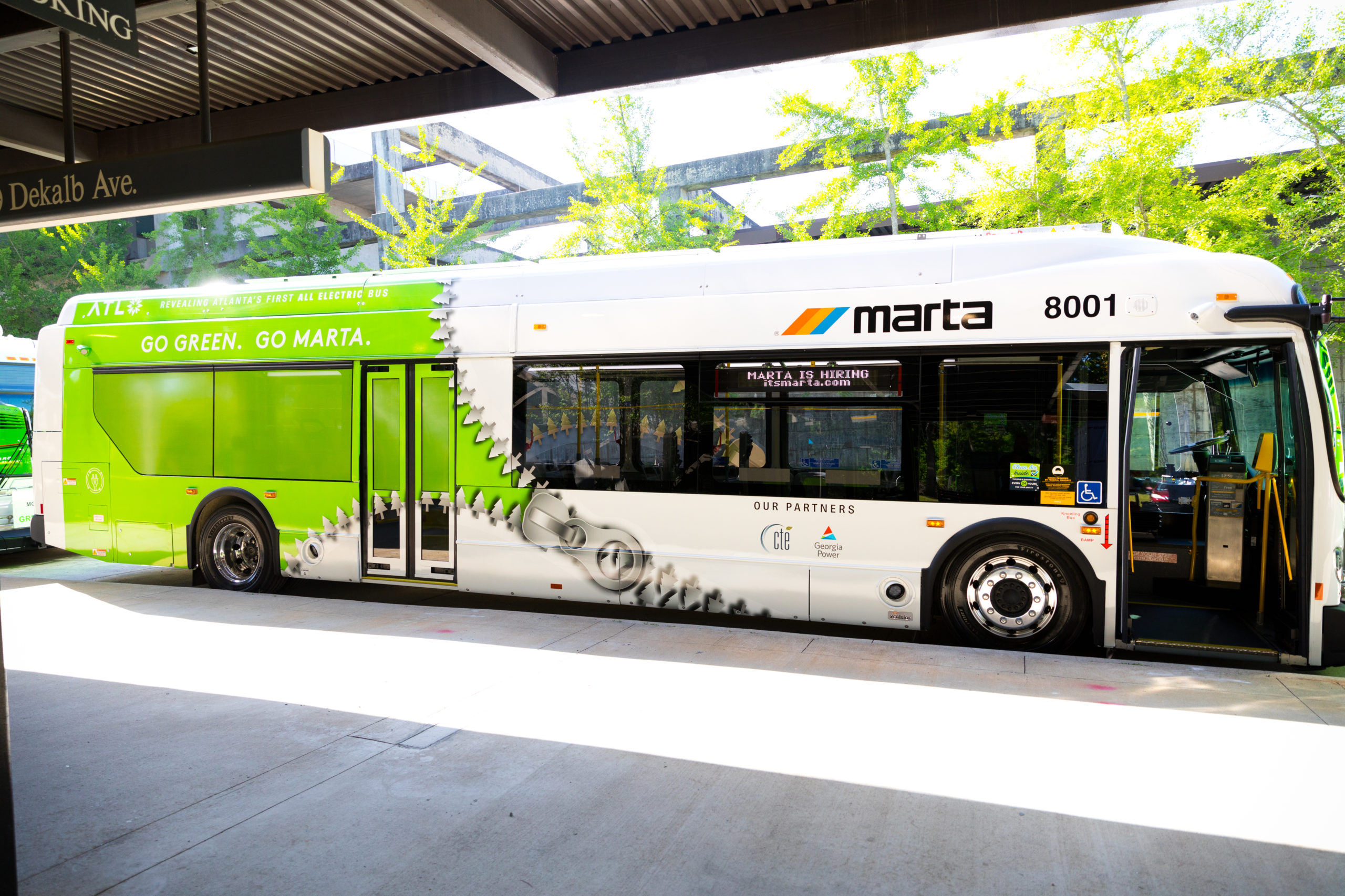 MARTA’s nationally recognized Sustainability Commitment Program received a federal funding boost recently with the award of a $19.3 million Federal Transit Administration (FTA) Low or No Emission Grant which will be used to purchase 25 electric buses and charging infrastructure. The buses and charging stations will be housed at MARTA’s Perry Bus Garage and service multiple bus routes in west Atlanta, many in disadvantaged communities, and connect to rail stations on both the East/West and North/South Lines.

“We are grateful to the FTA for its continued support of our sustainability efforts,” said MARTA Interim General Manager and CEO Collie Greenwood, “Our goal is to continue adding electric buses to the fleet to help combat climate change and reduce the public health impacts from air pollution, especially in our most vulnerable populations.”

MARTA launched its first electric buses on May 1, with support from a 2019 $2.6 million FTA Low-No Grant. Those six buses replace old diesel buses and will reduce MARTA’s fleet emissions by approximately 935 short tons of greenhouse gases, while also reducing harmful fine particle matter that is linked a variety of health issues. And in what has been a year of extraordinary federal funding success, Sen. Jon Ossoff, with support from Sen. Raphael Warnock, secured $3.8 million in Congressionally Directed Spending to support the purchase of an additional six electric buses.

FTA Administrator Nuria Fernandez was in Atlanta to announce MARTA’s recent Low-No Grant. “When a transit door opens, whether it is a bus, train, or ferry, it is a great equalizer for everyone in our nation,” said Administrator Fernandez. “With this tremendous amount of funding, the President’s Bipartisan Infrastructure Law gives more Americans access to the opportunities that transit creates, more often, in more places. These investments also help us meet our goals of cutting transportation emissions, creating good-paying American manufacturing jobs, and helping America’s transit workers prepare for new vehicle technology.”

“The transition to electric presents an opportunity for us to attract the next generation of transit professionals while building on current employees from apprenticeship to journeyman and from student to professional operator,” said Britt Dunams, Amalgamated Transit Union (ATU) Local 732 President. “As the transportation industry moves away from diesel and natural gas, workers who know how to operate and service electric vehicles are well-positioned to advance their careers.”

MARTA plans to continue transitioning away from diesel-powered vehicles, using electric buses to support Atlanta’s first Bus Rapid Transit (BRT) route through Summerhill and for Clayton Southlake and Campbellton Road BRT. MARTA’s remaining bus fleet is made up mostly of Compressed Natural Gas (CNG) buses that contribute to the Authority’s shrinking carbon footprint, reducing emissions the equivalent of keeping over 370,000 cars off the road or powering almost 300,000 homes for one year.

Last year, MARTA was awarded the American Public Transportation Association (APTA) Gold Level for its Sustainability Commitment Program, recognizing the Authority’s ongoing commitment to sustainability initiatives that have a positive impact on the environment and the communities it serves. Through the incorporation of sustainability efforts in four categories (Buildings, Environment, Community, and Climate), MARTA reduced water use by 40 percent, greenhouse gas emissions by 27 percent, energy use by 14 percent, and waste by 13 percent, over a seven-year period. Learn more about MARTA’s sustainability efforts here MARTA (itsmarta.com).