As the votes in Clayton County began flowing like a landslide in MARTA’s favor Tuesday night, Dr. Lawanda Falami could hardly contain her excitement.

“No more Mama pool for me,” said Falami, who has lived in Clayton County for 40 years. She proceeded to put her hand up in the air to high five anyone who would high five her back.

Clayton County, south of  Hartsfield-Jackson International Airport, has been without transit ever since 2010 when the economically-challenged county decided to no longer subsidize its C-Tran bus service.

So for the past several years, Falami has been driving as many as 38 kids to bus stops in Fulton County so they can get to school or to jobs or directly to destinations such as college.

Because even when bus service existed in Clayton, it was limited. So Falami said she has been driving “Mama pool” for the better part of 11 years because “I wanted to make sure they could get to work or school.”

Clayton’s overwhelming vote in MARTA’s favor Tuesday night implications were extraordinarily significant from the most micro level to the most macro level for the Atlanta region. 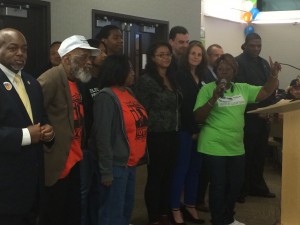 Roberta Abdul-Salaam, founder of Friends of Clayton Transit, thanks all member partners (Photos by Maria Saporta)

It literally will change the lives of citizens in Clayton County — especially those who don’t have a car or who can not drive for whatever reason. It certainly will change Falami’s life and the lives of all the students she’s been helping for years.

“This is a blessing for me today,” Falami said. “It will make sure our students can get to where they need to go. And I am free. I am free from my cars.”

State Rep. Valencia Stovall (D – District 24) said she was so excited by the fact that “residents now will have more options.” Clayton State University alone, which experienced a drop in enrollment when C-Tran was discontinued, stands to benefit, she said.

When C-Tran went out of business in 2010, more than 700 students were affected by the loss of the bus service.

“We know that hundreds will benefit from the reintroduction of transit through MARTA in the very near future,” Hyne said. “It’s a new day.”

“For us, it will give our students opportunities to participate fully in after school activities and Saturday activities,” she said. “It also will offer them employment opportunities.”

When the first returns appeared on a large video screen at a “Power of the Penny” victory part at Sjyboxx Restaurant and Sports Bar on Mount Zion Parkway in Morrow, the percentage of those in favor of joining MARTA was more than 71 percent. That percentage stayed above 70 percent the whole night.

By the end of the night – when 59 out of 60 precincts in Clayton had reported – the percentage had climbed to 73.72 percent in favor of MARTA (46,496 to 16,571). Officially they were voting to add a penny sales tax to join the MARTA system and become a full-fledged member of the transit system.

The vote was significant on a macro level as well.

By the end of the evening, striking posters were being passed out with an illustration of a Rosa Parks on a bus. “WE MADE HISTORY in Clayton County” – the poster read with a listing of dozens of organizations that were part of Friends of Clayton Transit.

Roberta Abdul-Salaam, founder and president of Friends, thanked everyone for the blood, sweat and tears that they had shared over the past many months and years to bring transit back to Clayton.

In MARTA’s 43-year history, Clayton is only the third county to join the rapid transit system. Many people attending both parties Tuesdays evening saw Clayton’s vote as the beginning of a new wave to adopt transit throughout the Atlanta region.

“Tonight is the largest expansion of the MARTA system in its history,” Atlanta Mayor Kasim Reed told the raucous crowd in Riverdale. “I just wanted to be with you tonight. God bless you all.”

Clayton State’s Hyne said he hoped the vote indicated that a “transportation mix was in the future for all of Georgia.”

For several people watching the returns, Clayton’s election results were the highpoint of the evening as Republicans kept their clean sweep in all statewide offices in Georgia.

When someone observed that Georgia may not yet be a blue state, MARTA board Chair Robbie Ashe chimed in: “but Clayton is an orange, yellow and blue county” – referring to MARTA’s tri-color banner.

Earlier in the evening, MARTA General Manager did not want to jinx the outcome by making any predictions – saying he would be happy with 50 percent plus 1.

Of course, political observers have said that if the MARTA vote was a landslide, it would help sell the case for transit throughout the region and at the state legislature.

One of the happiest leaders on Tuesday evening was Jeff Turner, chairman of the Clayton County Commission.

“The people have spoken. We are above 72 percent, and I believe that may still go up,” said Turner, who added that the Clayton Commission’s resolution was to give citizens an opportunity to vote.

“I campaigned on making this happen,” Turner said about why he ran for chairman in the first place. “I see this as correcting a wrong, and the wrong was that the prior board took transit away from Clayton County. We have brought it back.”