Martin Luther King III’s book — My Daddy — to be released Tuesday; dedicated to his daughter — Yolanda

Martin Luther King III was only five years old when his father led the March on Washington and delivered his famous “I Have a Dream” speech — 50 years ago this month.

Now King’s own daughter, Yolanda, is five years old — and he has dedicated his book — My Daddy — a children’s book about his memories of growing up with Martin Luther King Jr. — to her.

The book is being released on Aug. 6, just in time for the 50th anniversary celebrations of the March on Washington.

The symmetry among the generations is powerful. Yolanda is named after King III’s older sister, who passed away in May, 2007 when she was only 51. Her namesake is the only grandchild of Martin Luther King Jr. and Coretta Scott King, who passed away in January, 2006.

And the legacy certainly is not lost on King III or his wife, Arndrea.

“She has the spirit of her grandfather,” King said of Yolanda, in a recent interview at his home. He spoke about when he and Arndrea took Yolanda to get a sneak peak of the King Memorial statue in Washington, D.C. in May, 2011 when she was only three years old.

“It was just the three of us,” King recalled. “The statue itself was covered. It was supposed to be unveiled that August. Before going up to it, Yolanda said: ‘I’m not going to cry.’ When she saw it, she said: ‘This is awesome.’ She loves going there.” 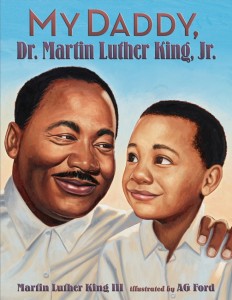 So it is not surprising that King would dedicate the children’s book of his memories of his dad to Yolanda so she and the rest of the world would have a better understanding of what he was like as a family man.

“What I realized is that there are a lot of books about him, but I’m not aware of any books that have been written about him as a father,” King said. “Yes, he was a great civil rights leader, but he was my father.”

The book includes several childhood memories. King remembers seeing FunTown, an amusement park that was next to the highway that they would pass when taking his father to the airport. He and his siblings really wanted to go to FunTown, which had a Ferris wheel and a roller coaster. But blacks were not allowed.

“We just didn’t understand as kids why some kids could go and we couldn’t,” King said, adding that FunTown was the first time that he grasped the concept of segregation and what his father was fighting to change.

The book recalls several other memories, including going to Spring Street elementary school. The King children and the Abernathy children integrated the Atlanta school and experienced the difficulties of breaking down the barriers of race first-hand.

What King has come to realize is that the issues of race, inequality, violence and poverty are ever-present.

“My big concern, I think many people thought that civil rights was done,” King said. “Then the 2013 Supreme Court guts the Voting Rights Act. And then there’s the Trayvon Martin case. This re-engages the dialogue.”

King goes on to recite the statistics of the large percentage of African-Americans who are in jail, the high unemployment of young African-American males and the need to forge a new agenda for change much like what happened 50 years ago.

As King said: “1963 was one of those years that created the foundation for incredible change and transition.”

King has teamed up with Al Sharpton, and they will be going to 15 cities across the country over the next year to work with civic, business, government and religious leaders to work on issues in the various communities as well as launch major voter registration drives in each one.

“I hope that out of our March on Washington, we sent a tone,” King said, adding that Sharpton and his national tour will be called the “National Action Initiative to Realize the Dream.”

For the 50th anniversary events, King will be part of the 2013 March on Washington, which will take place on Aug. 24. On Aug. 25, there will be a book launch and signing for the family and children’s day with the National Park Service at the King Memorial on the National Mall. There also will be a VIP reception when Yolanda and her father will do a reading of the “My Daddy” book.

Yolanda was asked what her grandfather stood for. Without any hesitation, Yolanda answered: “To be nice. To go to the same schools.”

Previous Article
Cynthia Jones Parks awoke to Moment, prompting her to borrow and invest in middle of recession
Next Article
Atlanta’s Makers and the Next Industrial Revolution