Much has been written about the differences between placemaking and placekeeping. To the uninitiated, the two can appear very similar. Both use art and cultural activities to make high-quality changes to the physical environment. Both involve a participatory process with community and local organizations, and both are ways in which space is claimed by a community.

As placemaking emerged as a cultural strategy for improving neighborhood livability in the wake of the Great Recession, it also became associated with the negative effects of gentrification and displacement as the concept was commercialized and used in combination with new development proposals. In some places, this kind of work became known as ‘placetaking’ to call out the disparity between the rhetoric employed by its practitioners and the results, which disproportionally displaced communities of color.

In recent years, the concept of placekeeping has arisen to counter placemaking by honoring and valuing the people who occupy the places above the places themselves. One might say that the key difference between the two involve whose story is told and who is telling it. Placekeeping recognizes and supports the community’s expertise in interpreting their own cultural memories and representing them as they choose through art and creative expression. 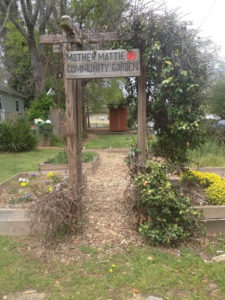 An instructive example may be found at Mattie Freeland Park in English Avenue. This small corner of greenspace has grown and developed over the last 15 years, cultivated by the sweat and determination of neighbors in pursuit of a vision sparked by Mother Mattie Freeland, a matriarch of the English Avenue community. For years, land viewed from her front porch—land which is now the park—was littered with abandoned cars and other debris. She wanted to see something nicer in her community, and she shared this vision with her friends and neighbors.

Although Mother Mattie passed away before her vision was realized, neighbors have since continued to work together to make her vision a reality. Shortly after her death in 2007, residents built a garden and created a small space for neighbors to gather. Sod, trees, and even playground equipment were donated, and soon the vacant lots began to resemble a park. The community used art to make the space their own, using donated benches, tables, and trash cans with bright yellows and reds, painting an abandoned building with larger-than-life images of neighborhood residents, and writing positive messages on signs for all to see.

Park Pride and The Conservation Fund are proud to support the community’s efforts to protect this special place and to transform it into an official City of Atlanta public park (an idea that is currently being explored). Although this small space is getting some much-needed upgrades like a new playground, walking paths, and pavilion, it is vital to keep the cultural legacy of the community intact – to engage in placekeeping. To this end, two professional Atlanta-based artists, Osaze Stigler and Muhammad Suber, were hired to advise and collaborate with the Friends of Mattie Freeland Park and shape the schematic design of the park buildout. 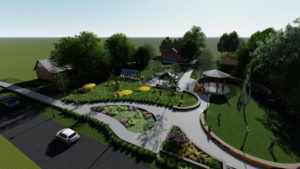 So that the park retains its authenticity as it evolves, Stigler and Suber strove to incorporate opportunities for art and community expression. After working with the community for four months, these artists’ recommendations include references to Mother Mattie’s love of flowers and the color yellow, representations of the ‘everyday’ people who bring their beautiful and humane spirits to the work of community building, and tributes to the spiritual traditions of neighborhood residents.

I had the honor of watching Stigler and Suber’s presentation as they shared their recommendations and ideas with the neighborhood, and I witnessed the emotional effect it had on people in the room as they saw their own stories reflected back to them through the artists’ work. Although much remains to be done, Mattie Freeland Park is off to a promising start as a place of authentic community representation.

For more information on the artists: