The Transform Westside Summit is back in business with in-person meetings at the Gathering Spot.

That was apparent Friday morning when a full house came to hear Atlanta Mayor Andre Dickens share his thoughts about his priorities on the Westside and for the City of Atlanta.

As someone who grew up on the Westside, Dickens spoke of how the names of the streets and schools emphasized the significance of the community — names like Martin Luther King Jr. Dive, Benjamin E. Mays High School and Booker T. Washington High School. 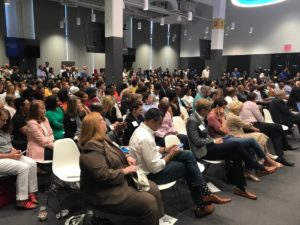 Standing room only at the Westside Future Fund’s Transform Westside Summit on June 15, 2018 for an address by Mayor Keisha Lance Bottoms. (Photo by Maria Saporta.)

Dickens said he’s steeped in Atlanta’s history, and he said he knew he wanted to be mayor since he was 16 years old. Dickens also said Atlanta is the only place he’s lived, even going to Georgia Tech to get his engineering degree.

“To me, Atlanta is a group project,” Dickens said. “We are all in it.”

Dickens did open up that he does not take a narrow view of his job as mayor.

“You have got to be able to get stuff done. You’ve got to be able to talk and chew gum at the same time,” Dickens said. “A hospital calls you to say that two hours later it’s going to announce it is closing – WellStar [Atlanta Medical Center.] In the last two weeks, I’ve spent about 60 hours on this. Now hospitals are not in the city’s charter. Talk about challenges.”

The city committed $5 million towards an initial goal of $20 million. “So far, we have $15 million towards our $20 million goal,” Dickens said, adding that the initiative is to prevent the educational disparities that show up by 3rd grade and are difficult to overcome. “We announced that 2023 will be the Year of the Youth.”

Again, education is not part of the city’s charter.

“In the past, you’d stop at your job assignment,” Dickens said of the job of being mayor. “I came to this thing to move Atlanta forward. Everybody has their own vision for [moving Atlanta forward].”

One of the mayor’s priorities is to build 20,000 affordable housing units in the next eight years, assuming he’s is reelected in 2025. “At Invest Atlanta just yesterday, we approved 1,800 units,” Dickens said. “If you’re a developer, get your shovels ready.”

The mayor also referred to land owned by the Atlanta Housing Authority, the Atlanta BeltLine and the Atlanta Public Schools as being ways to build more affordable housing. “If Atlanta is in your name, it’s our’s,” he joked.

In response to questions, Mayor Dickens spoke of the opportunities of having the World Cup being in Atlanta in 2026 as well as other major events, such as the possibility of hosting the Democratic National Convention in 2024.

Asked about whether it would be possible to make Northside Drive more pedestrian-friendly, Dickens said it’s a challenge.

“Atlanta has these large dividing lines within the city, including Northside Drive,” said Dickens, adding that building refuge islands in the middle would help people trying to get across. But redesigning Northside Drive will take cooperation from the state. “It is a state road. The city does not own the road, so we have to work with the state. Stare roads are for commerce. It’s tough. It’s a delicate balance because you have to negotiate with the state” on ways to provide pedestrian safety.

Now that the city has a planning commissioner on board and is in the middle of a search for a transportation commissioner, Dickens said his team will soon be in place to work on such issues.

Thanks to Chick-fil-A, breakfast is provided to attendees. Chick-fil-A’s Chairman Dan Cathy attends almost every meeting, held on the first and third Fridays of the month. The gathering includes people from all walks of life who are interested in the revitalization of the Westside. Meetings are open to the general public, and they are free of charge.