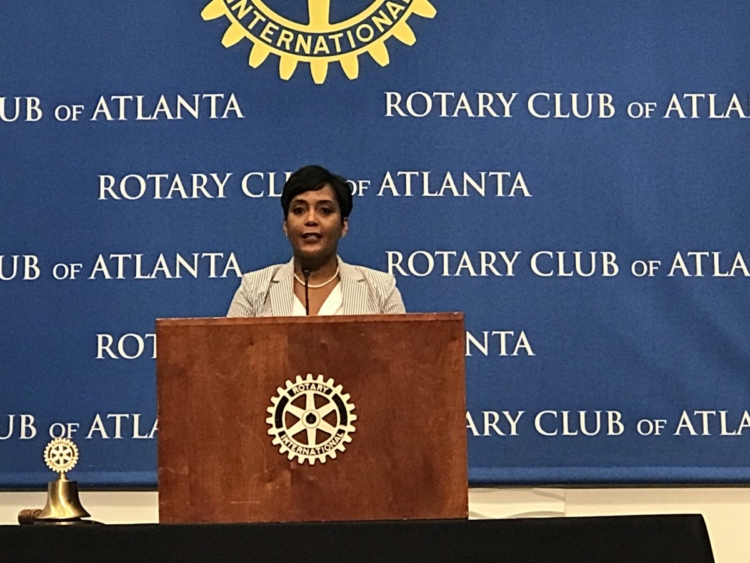 Mayor Keisha Lance Bottoms during her talk to the Rotary Club of Atlanta on June 25, 2018 (Photo by Maria Saporta)

Atlanta Mayor Keisha Lance Bottoms on Monday said the city has narrowed its search for an airport general manager to five finalists.

In a brief interview with a couple of reporters after speaking to the Rotary Club of Atlanta, Bottoms said she would not disclose the names of those finalists because “these people are all employed.”

The mayor, however, indicated that when it comes to compensation, the city would be open to making every effort to get the best person available. 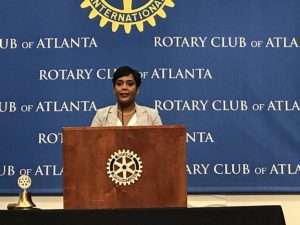 Mayor Keisha Lance Bottoms during her talk to the Rotary Club of Atlanta on June 25, 2018 (Photo by Maria Saporta)

Currently, the airport general manager at Atlanta’s Hartsfield-Jackson International Airport is paid a base salary of about $221,000 – much lower than the salaries of other commissioners who run significantly smaller airports.

“I asked our committee to not let pay be a factor in getting the candidates,” Bottoms said. “I wanted to be sure we had the best pool of candidates. We will get to the compensation piece (later). I didn’t want us to count anybody out because of wage.”

Bottoms said she received a report on the airport general manager search last week, but she has not yet met with any of the finalists.

“We are scheduling them now,” she said.

When asked about the timing of naming a new airport general manager, Bottoms responded “as soon as possible.”

Then she said it is an “interesting search” because anyone we choose has never run the world’s busiest and largest airport.”

The mayor said it is important that the next leader of Hartsfield-Jackson continues the expansion of both passenger and cargo traffic – “making sure the airport is really maximized.” She said she wanted someone “who really is a big thinker.” 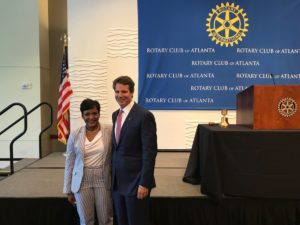 Mayor Keisha Lance Bottoms stands with John O’Neill, president of the Rotary Club of Atlanta, at his first meeting as president (Photo by Maria Saporta)

The previous mayor – Kasim Reed – refused to give the airport general manager a contract (he had at least three commissioners during his eight years in office). According to people close to the two searches during the Reed administration, the fact that Atlanta was not offering a contract may have been a factor for a couple of the finalists.

So would the Bottoms administration offer the next airport general manager a contract?

“We haven’t had that discussion,” Bottoms said. “I haven’t given any thought to that. I haven’t heart that come up as a hindrance with anyone. I’m sure that will come up.”
Overall, Bottoms said the goal is to hire the best person available.

“My thought is that everything is on the table right now,” she said. “I didn’t want to count out good candidates before we went in.”

The airport general manager search is being co-chaired by Carol Tomé, the chief financial officer of the Home Depot; and Dave Abney, the CEO of UPS. The Atlanta Committee for Progress is helping coordinate the various city searches. Korn Ferry is assisting in the  airport search.