Key members of Atlanta’s business and civic community met with Atlanta Mayor Keisha Lance Bottoms Friday morning to develop strategies on how best to respond to the coronavirus.

The Atlanta Committee for Progress met at the King & Spalding law firm for the private meeting where they were provided briefings from John Haupert, CEO of the Grady Health System; and Dr. Carlos del Rio, chair of Emory University’s Hubert Department of Global Health.

The meeting was attended by 21 board members in person and about 15 participated on the phone, including ACP Chairman Ed Bastian, who is CEO of Delta Air Lines – one of the Atlanta companies hardest hit by the coronavirus global outbreak. 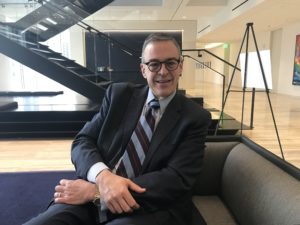 Haupert, who sat for a brief interview after the ACP meeting, said the business leaders were totally engaged on wanting to know how best to respond to the Coronavirus.

“I shared concern about the federal response to the disease,” Haupert said about some of the mixed messages coming out of Washington, D.C. “I spent most of my time talking about the Georgia response. I’m incredibly impressed with how Gov. Brian Kemp has gotten engaged. It’s not a figurehead thing. He really does listen to the experts, and he acts right away.”

Still, Haupert said there is much to be done.

“My biggest concern is the testing capacity,” Haupert said. “DPH (the Georgia Department of Public Health) has said they can do about 100 tests a day. We need at least 1,000 to 1,500 a day, minimum. If we don’t test, we don’t know who is sick and who should be quarantined.”

Haupert said Grady’s emergency room volume has increased by about 30 people a day. It currently is collecting samples from patients and sending them to labs.

“We are in the process of standing up our own testing capabilities as is Emory Hospital,” Haupert said.

Private companies, like LabCorp and Quest Diagnostics, also are increasing their testing capabilities.

“We have not responded at all to the needs of testing as have Singapore and South Korea,” Haupert said. “We should, and we have to, do much better.”

Haupert said the business leaders were absorbing the information and deciding how to apply it to their own workforces.

“A lot of these corporations can send most of their employees home so that can work from home,” Haupert said, adding that InterContinental Hotels Group already has told its 2,000-plus workforce at its North American headquarters in Atlanta they should work from home. Elie Maalouf, CEO of IHG’s Americas region, was one of the CEOs in attendance at Friday morning’s meeting.

Both Haupert and Del Rio said people should follow basic protocol. Avoid interacting with others if you feel sick, have a fever or a cough. Avoid meetings or gatherings of more than 50 people. Wash your hands frequently. Avoid shaking hands. Try to maintain a social distance of about six feet from other people. And use hand sanitizers as often as possible. 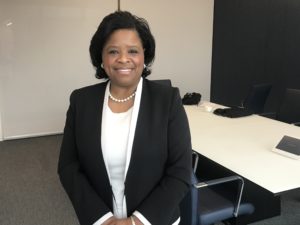 Shan Cooper, executive director of ACP, after an interview Friday morning following the ACP board meeting (Photo by Maria Saporta)

Cooper said Mayor Bottoms also gave Gov. Kemp “huge kudos” for the way he was taking a leadership role in Georgia’s response to the coronavirus. Two members of the Bottoms administration are serving on the governor’s 18-member Coronavirus Task Force – Felipe don Brok, the city’s director of the Mayor’s Office of Emergency Preparedness; and John Selden, general manager of Atlanta’s Hartsfield-Jackson International Airport.

Also, Bottoms is serving as chair of the Governor’s Task Force’s Committee for the Homeless and Displaced.

“The mayor has been closely aligned with the governor,” Cooper said. “She praised the governor and said we have an opportunity if we just pay attention and follow the guidelines.”

ACP meetings are by invitation-only, and they are closed to the public. Usually the mayor, the board chair and Cooper sit down and give a briefing after the meeting. But Cooper was the only one available Friday morning because Bottoms left right after the meeting, and Bastian attended the meeting by phone because he was having to deal with the repercussions of President Donald Trump’s travel ban of travelers from Europe.

Cooper, however, said Bastian sounded upbeat and calm despite all the uncertainty caused by the coronavirus on the airline industry.

“We all told him: ‘We’re saying a prayer for you,’” Cooper said.

ACP meets four times a year, and it includes the top CEOs in the Atlanta region as well as the presidents of the major universities and other civic leaders.