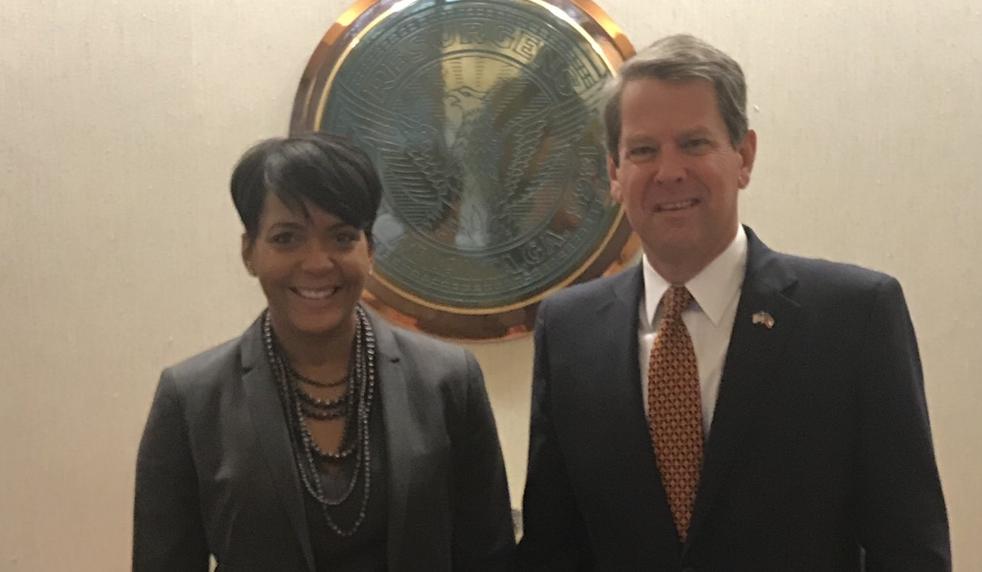 A photo was taken when Gov.-elect Brian Kemp was driven to Atlanta's City Hall to meet with Atlanta Mayor Keisha Lance Bottoms on Dec. 5, 2018 (Special)

In a sign the city of Atlanta and the state of Georgia will continue a close partnership, Gov.-elect Brian Kemp visited with Atlanta Mayor Keisha Lance Bottoms at City Hall on Wednesday morning.

“It was pleasant,” Bottoms said of the meeting with the future governor of Georgia.

At an event Wednesday afternoon at Mercedes-Benz Stadium, Bottoms agreed to a brief interview to talk about her meeting with Kemp. 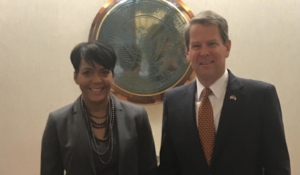 It was significant that Kemp walked from the State Capitol, which is diagonally across the street from City Hall, to meet with Mayor Bottoms.

The state of Georgia and the city of Atlanta forged a close relationship over the past eight years thanks to a friendship that developed with Gov. Nathan Deal and former Atlanta Mayor Kasim Reed. Bottoms has continued that relationship with Gov. Deal – working together to get the CIM-Gulch deal passed, trying to secure the relocation of the Norfolk Southern Corp. headquarters and bidding for the Amazon HQ2 project.

Asked if she believed she could forge a similar relationship with Kemp, Bottoms said: “That is my expectation.”

It was not necessarily a given that Kemp and Bottoms would be able to work hand-in-hand. Bottoms, a Democrat, strongly supported Stacey Abrams, the Democratic nominee for governor who lost to Kemp in a close race.

During much of his campaign, Kemp spoke about issues important to rural Georgia – such as the plight of rural hospitals. He did not spend a great deal of time talking about issues specific to the Atlanta region, and the core metro counties of Fulton, DeKalb, Clayton, Cobb and Gwinnett were all strongholds for Abrams.

“Obviously the election is over,” Bottoms said. “We have to look forward as a state, and we have to govern. It’s about us making sure we continue to work together.”