Atlanta Mayor Kasim Reed announced that agreements have been reached with both black churches that would have to be bought to make way for a new Atlanta Falcons stadium on a site south of the existing Georgia Dome.

Flanked by leaders from Mount Vernon Baptist Church and Friendship Baptist Church, Reed said that the Arthur Blank and the Atlanta Falcons organization had agreed to invest another $8.3 million to make the deal on the south site more viable.

Friendship already had announced that the city and its leaders had agreed to a $19.5 million deal, which still has to be approved by its congregation.

But the mayor announced Friday morning that Mount Vernon’s leadership has approved a $14.5 million offer, $8.3 million more than what the Georgia World Congress Center Authority legally was able to offer the church. 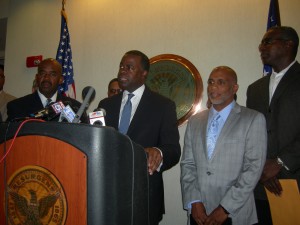 Reed met with Blank last Thursday who agreed that the Atlanta Falcons organization would come up with $8.3 million to make up the difference. Mount Vernon’s congregation has scheduled to vote on the offer on Sept. 19.

Mount Vernon’s Rev. Rodney Turner said he felt that the offer that has been made is “a good offer,” and that his congregation has been in prayer from the beginning that the right decision will be made.

Asked if sweetening the offer to buy the church had made a difference, Turner said: “Additional money always makes a difference. But additional money does not decide the outcome. We have been in prayer. We are a church. We are not a business.”

During his meeting with Blank, Reed did make a commitment. If either church were to turn down the offers, then the mayor would turn his full support to having the stadium be built on the north site — so that there would not be any delays in the project’s design and construction schedule. 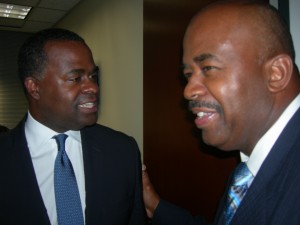 The north site is about a half-mile north at the corner of Northside Drive and Ivan Allen Jr. Boulevard. It is not as attractive as the south site, which sits between two MARTA stations and is adjacent to the Georgia World Congress Center.

“I also know he is very concerned about scheduling,” Reed said. “There was a sense within the Falcons organization that it (negotiations with the churches) was never going to end. The north site was fixed.”

Reed said that Blank also understands that the south site is more environmentally sustainable than the north site because of its transit access — which lessens the need for parking.

But if there are construction delays “several millions of dollars are put at risk because of the delay,” Reed said. 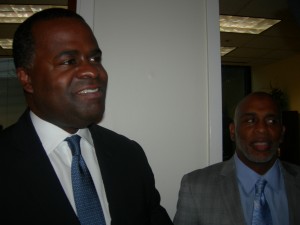 The new retractable roof football stadium, which also could be used for professional soccer, concerts, major gatherings and conventions, is expected to cost about $1 billion. It is expected to open in 2017. Once it is built, the existing Georgia Dome would be demolished.

In order for the project to move forward on the south site, the state still would have to acquire six other pieces of property. One of those parcels already is in the condemnation process. The state will negotiate to buy the other five, which combined total less than two acres. If they can’t agree on a price, the state is prepared to use eminent domain to acquire those pieces.

So the biggest issue that remains is whether the congregations of both churches will approve their respective offers.

Lloyd Hawk, chairman of the board of trustees of Friendship Baptist Church, said that the leadership of his church believes the $19.5 million is a good offer and that they will be recommending to the congregation that it be approved. A vote is likely during the weekend of Sept. 22.

Rev. Turner said that the vote of the Mount Vernon congregation will be done in private, but he said the church would announce the results after the vote on Sept. 19.

Asked if the $14.5 million deal was contingent on Mount Vernon rebuilding, Reed said that there were no conditions to the offer.

“The offers are not conditional,” the mayor said. “We are not in their business.”

There has been speculation that Mount Vernon could merge with another congregation rather than rebuild. But Rev. Turner discounted that speculation.

“If we move forward with this process, then our sights are on building a new edifice,” Turner said.

The mayor said that the city has agreed to help both Friendship and Mount Vernon with their efforts to rebuild in the community.

If and when both churches have voted to accept the proposed offers, the mayor said that there likely will be a major event with all the players involved — the Atlanta Falcons, the Georgia World Congress Center and the city — to officially announce that the new Atlanta Falcons stadium will be built on the south site.