Mayor Kasim Reed is going to do all he can to keep the Atlanta Hawks in town within the city limits, he pledged during a press conference Tuesday in his office Tuesday.

Less than a year ago, the mayor held a press conference in the same room reacting to the news that the Atlanta Braves would be leaving Turner Field to build a new stadium in Cobb County.

The Braves announcement had caught the city off-guard. And it was readily apparent on Tuesday that Mayor Reed wasn’t going to let another professional sports team leave the city under his watch – if he could help it. (Atlanta’s professional hockey team – the Thrashers – were sold and moved to Winnipeg in 2011).

On Tuesday, Reed felt compelled to hold the press conference because he had been out of the country last week and not available to comment on all the turmoil of that had occurred around the Atlanta Hawks. 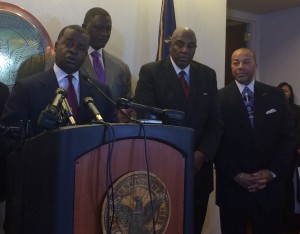 The Hawks had one of its toughest weeks ever as news began trickling out on Sept. 7 – first, managing owner Bruce Levenson disclosed that he had written a racially-laced internal email to other Hawks officials. He “self-reported” and agreed to sell what Reed said was his 24 percent interest in the team.

Reed also disclosed that Levenson’s other partner from Maryland – Ed Peskowitz also wold be selling his stake, meaning that 50.1 percent of the team was now for sale.

The remaining ownership belongs to an Atlanta team made up of Mike Gearon Jr., Mike Gearon Sr., Rutherford Seydel and Steve Koonin, CEO of the Hawks, who is thought to own a small sliver.

Reed said that he understands that the Atlanta team would not be selling their ownership share right now. “Mike Gearon, his father and Rutherford Seydel want to maintain their ownership,” Reed said.

The NBA will be engaging an investment banker to assess the value of 50.01 percent of the team (Forbes Magazine estimated that the Atlanta Hawks are worth $425 million – 27th among the 30 NBA teams. By comparison, the most valuable team is the New York Knicks, estimated to be worth $1.4 billion.

Other info disclosed at the press conference:

The mayor said he has talked to five or six prospective buyers for the 50.1 percent share of the Atlanta Hawks.

“At this time we cannot share the names of the people we are having conversations with,” Reed said.

But the mayor added that every prospective buyer has mentioned that they would like to have “significant minority representation” on their ownership team.

In addition to Levenson’s troubles, general manager Danny Ferry also had his own struggles when the transcript of a telephone conversation he had with the Hawks co-owners included some derogatory comments about a highly-sought after black player – Luol Deng – saying he had a little too much African in him. The week ended with Ferry taking an indefinite leave of absence.

Reed said he found Ferry’s comments “reprehensible” and that they “had no place in the City of Atlanta.”

But he said the focus should be on the future rather the past, and the most important issue was making sure that the Atlanta Hawks remain in the City of Atlanta.

The mayor also said he would be going to New York on Sept. 26 to meet with NBA Commissioner Adam Silver to talk about the ownership options for the team.

Asked if he would be interested in becoming a part-owner of the team, Wilkins responded in the following way: “Of course I want to be involved in any way possible.”

Contrary to the comments that Levenson and Ferry had made, Wilkins said the Hawks is about “what we do together and pull together as all races.”

Reed quickly jumped in, implying that Wilkins may not have been treated as well as he should have in the past couple of years.

“We care about Dominique Wilkins,” Reed said. “He should be treated in a certain fashion. They (the Hawks) are moving in the right direction. Steve Koonin has made the right decision.”

The mayor was asked if the city would be willing to give a new owner incentives to keep the team in Atlanta.

“When we were negotiating with the Atlanta Braves, we had capacity of about $125 million, but that wasn’t enough (to keep the Braves),” Reed said, adding that the city would offer incentives as a “last resort.”

The city owns the debt on Philips Area, and Reed said that is one of the reasons he wants to reach an agreement with the Atlanta Braves on their exit from Turner Field. That would permit the city to sell that property and give it even more options to contribute to a new Hawks development.

No matter what, the press conference made it clear that the mayor is standing next to Wilkins – supporting the former Hawks star who has been serving as a vice president of the organization for more than eight years. Tommy Dortch, who has been championing the effort to get a statue.

Reportedly, Hawks executives had put up several roadblocks that got in the way of getting the project done.

Asked when Atlanta would be seeing a Dominique statue in front of Philips Arena, the mayor quickly answered March 2015.

Dortch then chimed in saying the statue will be unveiled on March 6 when the Hawks play the Cleveland Cavaliers.