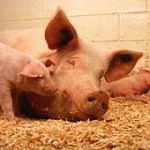 To Athens geneticist Gene McCarthy, pigs used to conjure filth and greed. But after years of research into this species, McCarthy sees a kindred spirit. Pigs, according to his Hybrid Hypothesis published last month on his website, Macroevolution.net, helped create humans by mating with chimpanzees.

As radical as it sounds—not to mention a coupling that many of us would rather not visualize—McCarthy is also following the steps of scientists like Galileo who risked derision to revolutionize how we understand our world and how we got here. McCarthy has offended evolutionists and creationists alike and even had a ribald comedy sketch aired on late night TV.

“I tell you what, my body makes a lot more sense to me now,” quipped talk show host Jimmy Kimmel before introducing the sketch.

This is no joke, however. Phys.org, a respectable science research news website, published its first article by reporter John Hewitt on McCarthy’s theory July 3. The reaction was so strong that Phys.org followed up with a second article July 25. 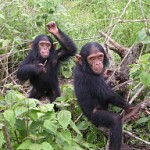 “Extraordinary theories require extraordinary evidence and McCarthy does not disappoint,” wrote Hewitt. “Rather than relying on genetic sequence comparisons, he instead offers extensive anatomical comparisons, each of which may be individually assailable, but startling when taken together.” 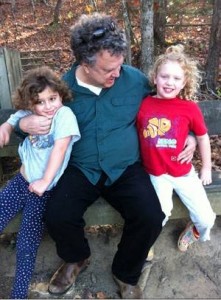 Gene McCarthy of Athens with his twins Margaret and Clara

Science currently supposes the chimpanzee to be our closest living relative. McCarthy believes humans evolved from an original pig-chimp mating, likely a female chimpanzee and a male pig, followed by several generations of  “backcrossing.” In other words, the offspring and descendants of that pairing, like Tarzan, lived among chimpanzees, but unlike Tarzan, McCarthy says, they mated repeatedly generation after generation with chimps, becoming more and more like chimps and less and less like pigs.

Eventually, probably at least three or more generations later, they became humanlike creatures, who began to think of themselves as different from chimpanzees, and thereafter mated only among themselves.

McCarthy’s been working on this theory for decades. He first told me about it 20 years ago, when I first met him through his wife Rebecca, a former colleague at the Atlanta Journal-Constitution. Since then, he’s become an acknowledged expert on hybrids, having authored the Oxford University reference book, Handbook of Avian Hybrids of the World, published in 2006. On his website, he is publishing his massive collection of information on hybridization in mammals.

In his research into human origins, McCarthy employed the same methods he had seen other biologists use in identifying unknown hybrids. So he first made the assumption, based on chimpanzees being our closest living relative, that the chimpanzee would likely have been one of the two parents in the cross. He then made a list of all the characteristics that distinguish us from the chimpanzees. That list he realized would describe the traits of the second parent, if it still existed.

Among them: largely hairless skin, a comparable layer of fat beneath the skin, thermoregulatory sweating, light-colored eyes, a protruding rubbery (cartilaginous) nose, vocal cords, heavy eyelashes, humanlike molars, a short pelvis, a curved sacrum with short dorsal spines, similarities in the structure of the kidneys and other internal organs, tiny hooves (called ungual tuberosities) just beneath the skin on the tips of our fingers and toes, and a wide variety of other features. 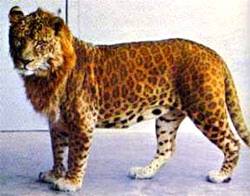 This leopon is an example of an animal hybrid: a cross between a leopard and lion (From macroevolution.net)

All characteristics except two—big brain and upright posture—turned out to be  present in pigs. McCarthy was shocked. Looking further, he found anatomical characteristics in either pigs or chimps that when combined in a hybrid would produce an increase in brain size and allow that hybrid to walk erect. Everything seemed to fit.

As you probably know, pig heart valves and pig skin tissue are used in surgeries because of their compatibility with the human body.

McCarthy’s conclusions have startled others in his field, and not always in a good way.

“Hilarious,” wrote the author of the science blog, Pharyngula, P.Z. Myers. He ridiculed McCarthy personally and gave only a glancing critique of the science behind the theory: “I’ve decided that this explanation for human origins must be called the Monkey-(expletive)-A-Pig hypothesis, or MFAP for short).”

McCarthy’s theory collides with common misconceptions about hybrid animals. Critics say his theory can’t be true because hybrid animals, such as mules, are most likely to be sterile. 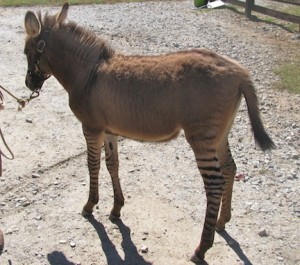 This zedonk named Pippi, produced by a zebra father and donkey mother, was born at an exotic animal facility in north Georgia.

For example, in the case of both the “liger” (the offspring of a tiger and lion) and the “zedonk” (the product of zebra-donkey coupling), female hybrids have produced progeny in backcrosses with the species from which they were derived.

A more contentious argument is that the genetic differences between certain animals, say, between those of different taxonomic orders or classes, make hybrid offspring from their pairing all but impossible.

But McCarthy has many examples of strange hybrids on his website. He also points out that research published in the journal Nature in 2004 showed that the egg-laying platypus was found to have sex chromosomes of both bird and mammal origin, raising the probability of an ancient crossbreeding of species even more distant than pigs and monkeys.

In terms of DNA sequence similarity, humans and chimps are about 98 percent alike, which might suggest there isn’t much room for pigness in us. And McCarthy agrees that repeated generations of backcrossing—to only one of the two parental species from which the original hybrid was derived—would result in the DNA of hybrids in later generations being quickly homogenized back toward the DNA of that parent in terms of sequence similarity, which would render the task of tracing pig DNA in humans very difficult.

However, he also says that shifts in gene counts caused by reshuffling of the genome during this backcrossing process might well result in a creature more pig-like than a chimpanzee, because the number of copies of each kind of gene would be shifted away chimpanzee and toward pig.

Such changes are called “dosage effects.” An example of a dosage effect is Down’s syndrome, in which an extra copy of chromosome 21, and therefore an extra copy of each gene on that chromosome, results in a whole suite of changes during development (without any change whatsoever in the DNA sequences themselves).

McCarthy says he hasn’t been surprised by the critics. 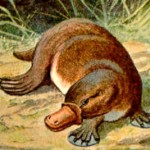 Duck-billed platypus has features of birds and mammals, suggested a cross between species. (From macroevolution.net)

“It almost like some of the evolutionists are reacting in a parallel way to the creationists. It’s like they’re saying, ‘this is a most blasphemous thing that you’re saying. We know the truth. We know that you are misinformed,” McCarthy said. “It (the hybrid theory) seems to raise the same hackles among some of them as making fun of Jesus does to Baptists.”

Phys.org’s second article July 25 defended McCarthy and his hybridization theory against “those coming out against the theory (who) had surprisingly little science to offer in their sometimes personal attacks.”

Furthermore, “as many critics noted, the advancement of scientific knowledge does not require disproving every radical theory that comes along. Lots of incorrect theories exist that cannot, for all practical purposes, be formally disproven. It seems, however, that decent arguments against the hybrid origins theory are surprisingly hard to find, and moreover, the established elders of the field, well, they know it.”

What if this theory is true —how might it change the way we see ourselves?

“I must admit that I initially felt a certain amount of repugnance at the idea of being a hybrid,” writes McCarthy in the conclusion to Hybrid Hypothesis. “The image of a pig mating with an ape is not a pretty one, nor is that of a horde of monstrous half-humans breeding in a hybrid swarm.

“But the way we came to be,” he says, “is not so important as the fact that we now exist. As every Machiavellian knows, good things can emerge from ugly processes, and I think the human race is a very good thing. Moreover, there is something to be said for the idea of having the pig as a relative. My opinion of this animal has much improved during the course of my research. Where once I thought of filth and greed, I now think of intelligence, affection, loyalty, and adaptability, with an added touch of joyous sensuality — qualities without which humans would not be human.”