Six months after reopening, most customers — and some new ones — are back at Melton’s App & Tap in Decatur. New beers flow from the tap, with tantalizing names like Green Flash West Coast IPA and Sierra Nevada Southern Hemisphere Fresh Hop Ale. 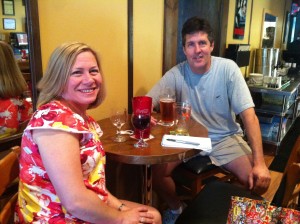 Owners Staci and Aaron Melton at Melton’s App & Tap. The restaurant appears to many customers as if it is back to normal, but for the Meltons, the stress continues.

“From the outside looking in, it looks like we may have even benefited,” said owner Aaron Melton. “But the reality is at the end of the day, it’s always a struggle….I really just wish I could focus on running a restaurant.”

Melton and his wife Staci, sitting at a bar table amid a decent weekday dinner crowd, still live with the damage – financial and emotional — from a rat infestation that closed their doors in late 2011.

Every day, they think about their lawsuit against their neighbor, Pet Supermarket, which is in the discovery phase in DeKalb County Superior Judge Daniel M. Coursey Jr. If a resolution comes at all, it will take a while. At stake for the Meltons is $250,000 – their lost revenue and debt for repairs. 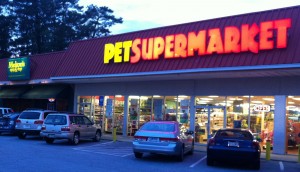 A 2011 rat infestation caused Melton’s App &Tap (left) to shut down. Now its owners are suing Pet Supermarket for lost revenue and damages.

Take away the litigation, and the Meltons still represent the psychological struggle for so many of us in middle-class Atlanta and America. Despite hard work and diligence amid economic distress, our standard of living and hope in the future have gone from security to struggle. We come face-to-face daily with this reality: forces beyond our control can quickly shut us down.

In this new economic reality, even our children absorb the frustration and struggle.

The Meltons’ daughter Chloe, age 7, saw someone walking in the pet store. “Don’t shop there,” she said, before her mom shushed her.

The rollercoaster of feelings started with exhiliration when their doors re-opened just before New Years 2012.

“We had a strong spike when we first opened,” Aaron Melton said. “Those next two months were busier, which was great considering the P.R. damage – the fact that it was rodents.” 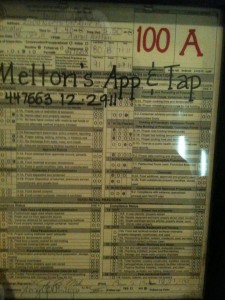 After making repairs in late 2011, the restaurant posted their inspection report as an invitation for patrons — and new customers — to return.

“Now, it’s more the normal type of business, a little less than this time last year,” said Aaron. “Our regular supporters can’t maintain what they were doing – they can’t afford to come in seven days a week.”

Loyalty meant Melton’s survived. Of 34 employees, 33 returned. They’ve stayed even without normal raises and bonuses. “Hold on a little longer,” Aaron Melton tells them, in hopes that they will. So far they have.

“That’s the same reason we feel we’ll make it this time and in the long run,” Melton said. “There’s a certain core of people who are going to be with us through thick and thin. Without them, I don’t like our chances.”

When Staci Melton, an Emory-trained attorney, looks at the restaurant’s books and daily life, she tries to find “light at the end of the tunnel.” 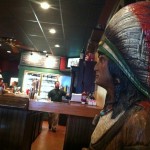 A cigar store Indian is part of the Melton’s ambience.

Last fall, before this crisis, Melton’s – open since 1994 — was having its best year ever. The couple had almost paid off the debt from a second restaurant that they had opened in Oakhurst just before 9/11. The shock rippled through local businesses; their new one failed.

“We knew Oakhurst was a gamble,” said Aaron Melton, who describes his business strategy as “guarded risktaking.”

“After that, I promised myself I would never be in that position again, and then we were put in that position…. The risk is there each day, all that debt to pay. We have one slow day and I want to pull my heart out.”

A terrorist attack? Rats? These aren’t the typical potential obstacles in a business plan.

Few of us predicted the economic downfall, either. 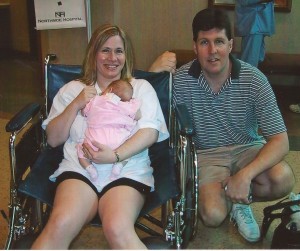 Staci, Aaron and newborn Chloe Melton left Northside Hospital after a touch and go struggle. Chloe was born prematurely and would need special care at home to survive.

Perhaps this canyon edge of financial uncertainty is where our children can teach us something about fear and worry.

In 2003, Staci Melton was 19 weeks pregnant when she miscarried. Two years later, pregnant again, she was put on hospital bedrest.

Chloe was born at 27 weeks.

The next 3½ months were spent in the neonatal ICU trying to keep their little sprout alive. “We knew she could be taken in a heartbeat,” Aaron said.

Once she came home, she was quarantined for a year.

“What got her through was a strong will,” Aaron said. 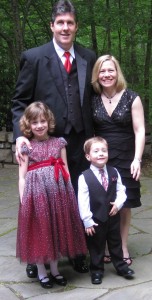 The Melton family at a wedding in April: Aaron, Staci, Chloe and Charlie.

They are partners in the restaurant and in the responsibility of raising Chloe (and her little brother Charlie).

Her name means “green shoot,” or “fresh blooming” – a reminder that restoration is real and possible, and may be a long time coming.