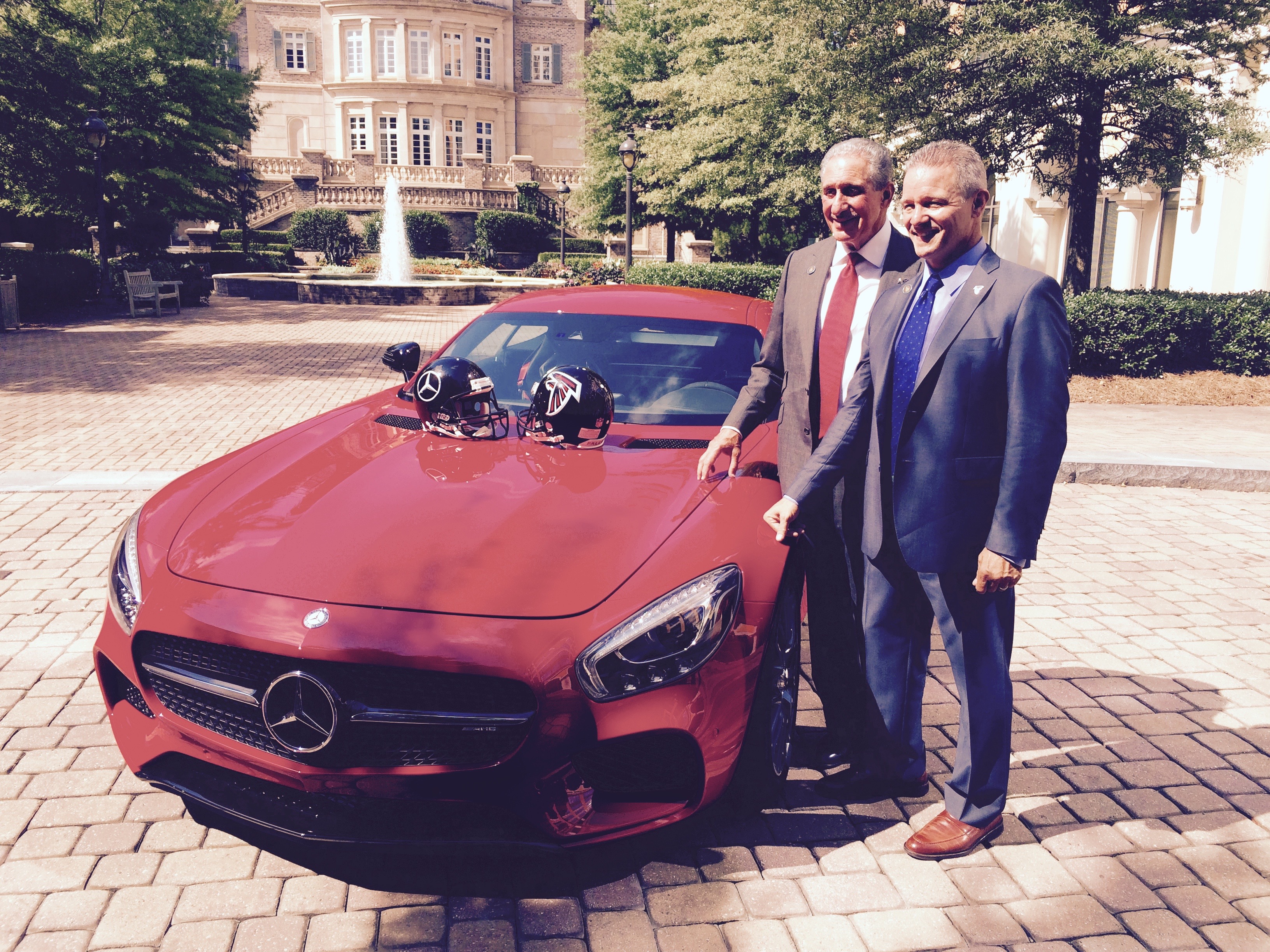 But neither side disclosed the dollar value of the deal – which will extend through 2042 – two years between now and when the stadium opens in 2017 plus 25 years. 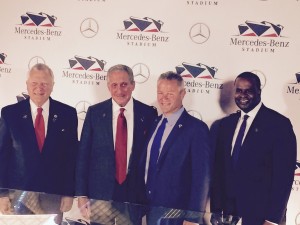 Blank described the first time he met Cannon last October. The Metro Atlanta Chamber had asked him to meet with executives of a Fortune 50 company that was considering moving its U.S. headquarters to Atlanta. They met at the New Atlanta Stadium Preview Center on Northside Parkway, coincidentally the same location as Monday’s press conference.

Without knowing for sure who he was talking to, Blank jokingly told Cannon: “If you are interested, you can put your name on our building.”

At the time, Cannon mentioned that the company already had its name on a sports building (the Super Dome in New Orleans) – again not disclosing his company.

A few months later, Mercedes Benz announced it was moving its U.S. headquarters to Atlanta – and that it would be building a new headquarters in Sandy Springs.

Blank and Cannon met again in February, and the idea of naming rights was discussed. Mercedes Benz also talked to the Atlanta Braves and the Atlanta Hawks. 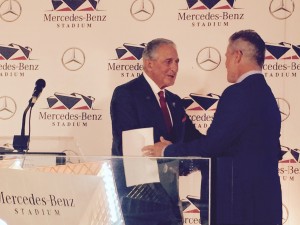 But Cannon said he quickly zeroed in on the new Atlanta stadium.

“It is such an iconic building – one that is unique among stadiums,” Cannon said Monday. “The fact that it is in a downtown location is very important to us. We wanted to be part of the fabric of the community. And you get a stadium that has football, soccer and other major events.”

“It is the single biggest deal we have done in the United States,” Cannon said.

Later Cannon said: “These are hard deals to put together. There are big dollar signs attached to it. There was a lot of selling in our organization. But everybody saw the virtue of us doing this.”

Blank said that the Atlanta Falcons organization spoke to “something north of 10” companies interested in the naming rights of the new stadium. “It was competitive,” Blank said. 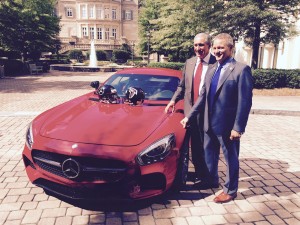 Mercedes Benz ended up winning the name because of a combination of “the brand and the economics,” said Blank, who described how the two entities were culturally aligned. “They were great to work with. They don’t sponsor a lot, but what they do sponsor, they do it with quality.”

Cannon did say that Mercedes Benz is in the middle of a 10-year deal with the Super Dome, and that when that naming rights agreement was made, the company had no idea it would be moving its headquarters to Atlanta or that it might have an opportunity to put its name on a new Atlanta stadium.

“Obviously having two stadiums in the same division, you wouldn’t plan it that way,” said Cannon, who added that he was thrilled that the company would be associated with a stadium offering both football and soccer – which is growing in popularity in the United States and is the most popular international sport.

“I think there certainly will be adequate reason for them to know that this is in the state of Georgia and the City of Atlanta,” Deal said. “If they don’t know, we will gladly give them a map.”

Later the governor said that Mercedes Benz decision to put its name on the stadium is yet one more example that Georgia is being recognized as a great place to do business.”

Previous Article
Southern Co. acquiring AGL Resources in $12 billion deal
Next Article
The dragon that reaches out and grabs you