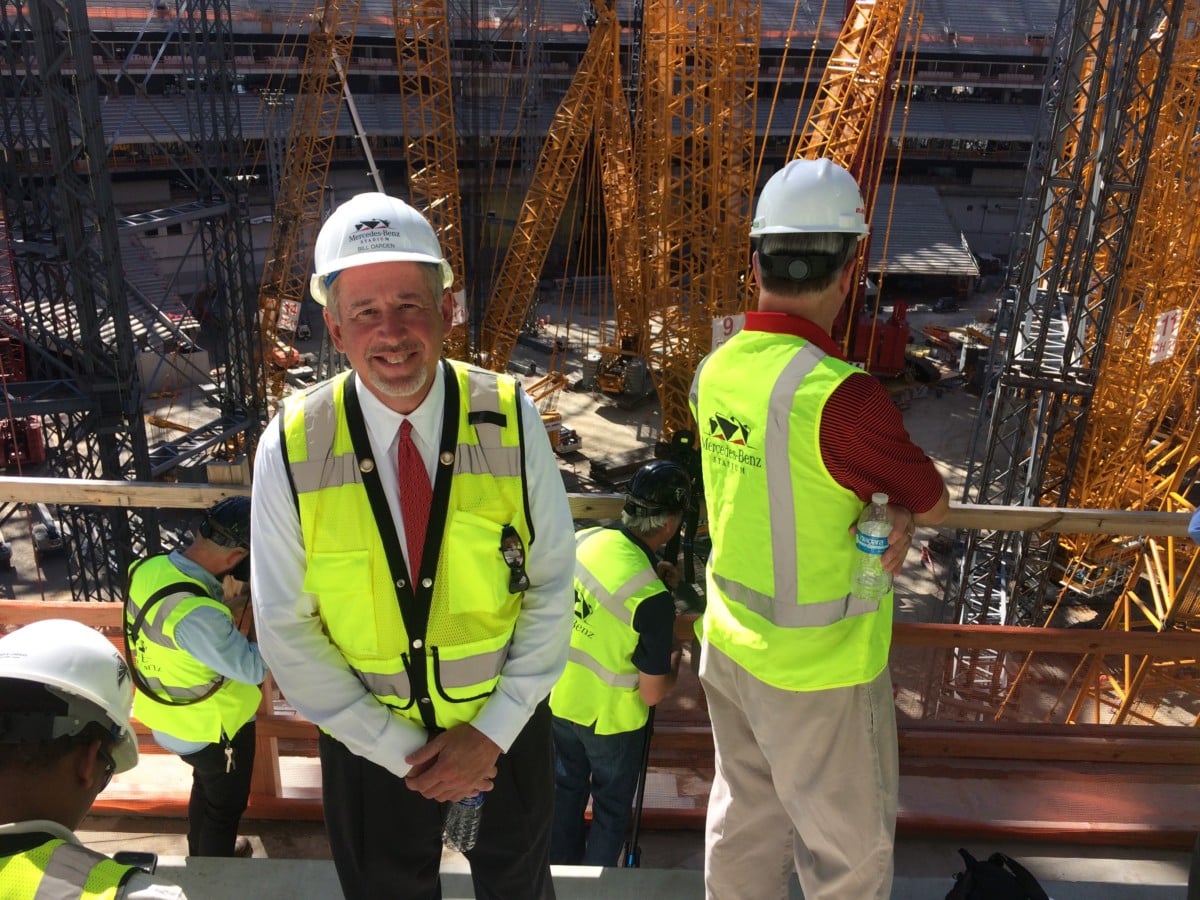 By Maria Saporta
As published in the Atlanta Business Chronicle on Nov. 18, 2016

In keeping with Atlanta’s tradition, the new Mercedes-Benz Stadium is being built with a strong commitment to diversity and inclusion.

The $1.5 billion construction project has contracted with 130 minority-owned and female-owned firms to create the new stadium for the Atlanta Falcons and Atlanta United soccer franchise.

When the city became part of the financing plan to build the stadium, the Atlanta City Council stated their desireto have it follow the city’s EqualBusiness Opportunity (EBO) standards. A goal was set at 31 percent minority participation. 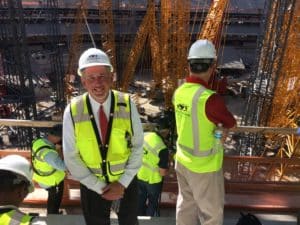 Bill Darden, project manager for the Mercedes-Benz Stadium, during a recent walk-through (Photo by Maria Saporta)

The latest quarterly report for the project – to be submitted Nov. 18 – shows the project team has exceeded that goal and has a minority participation of 36.4 percent – a number that even surprises some of the principals involved.

“It’s thrilling place to be,” said Bill Darden, project manager and the representative for the development team. “We sort of have created the new gold standard for how to set the EBO.”

Rich McKay, president and CEO of the Atlanta Falcons, said minority participation was important to the Atlanta City Council during the stadium negotiations, but it wasn’t a stretch for the Falcons team and team owner Arthur Blank.

“For Arthur, it has been part of his culture,” McKay said. “It was an important milestone for us as we interviewed construction teams. We were drawn to Holder because of their commitment, and HHRM knows how important it is to Arthur.”

Larry Scott, director of Atlanta’s Office of Contract Compliance, described the minority participation results thus far as “among the best.” Although it is not being run by the city, Scott said the team and the city have a memo of understanding on the guidelines and certification process.

“Arthur would have done it anyway. But the city pushing a little harder probably got the number up,” Darden said. “There are two stories here. There’s the overarching story of giving people an opportunity to participate. The second story is the team – the people sitting around the table.”

About a dozen people gathered around the table to talk about their roles in helping make sure they met their EBO goals.

Doretha Smith, diversity program coordinator for HHRM team, said Holder had just completed the new International terminal at Hartsfield-Jackson Atlanta International Airport, and the city-run project had a commitment of 35 percent minority participation. “We ended up with 39 percent participation,” she said.

“On a pure city project, that was a high water mark,” said Rodney Strong, chairman of Griffin and Strong, a 25-year-old consulting firm hired to help Darden and HHRM meet its goals.

By comparison, Mike Burnett, HHRM vice president and pre-construction director, said the stadium project was “way more complicated and had a lot more challenges” than the International Terminal. But he said the stadium project worked well because the team was cohesive and everyone supported each other. Strong, who served as director of the City of Atlanta’s Office of Contract Compliance from 1984 to 1992, agreed. “This one, without a doubt, was the most harmonious team I’ve ever worked with,” he said.

Strong actually had been an intern during the first administration of Atlanta Mayor Maynard Jackson, the national pioneer of joint ventures and minority participation goals participation when he was building the new airport in the late 1970s.

“I think everything has gotten better, especially in Atlanta,” Strong said. “Some jurisdictions I go to, they’re still in the 1970s.”

There have been cases where minority firms serve as a front for majority firms trying to get contracts, allowing themselves to be used in an illegitimate fashion. The city and Strong’s organization monitor the various minority firms to make sure they are actually doing the work. The whole point, Strong said, is to make sure firms are growing their own capacity in their field. “For this project, we were making sure the firms were really legitimate,” Strong said.

Two companies that stood out during the course of stadium project were Technique Construction and NewGen.

Technique Construction, an Atlanta-based construction firm that specializes in heavy industrial concrete projects, was started in May 2010 by

Billy Freeman Jr., who used to work at Holder.

Technique has been awarded two contracts in the building of the stadium – both of them for $4 million, the largest contract amount it has ever gotten. The stadium contracts have given Technique the ability to expand – forming a new company – Technique Supply International.

NewGen served as a subcontractor to Reeves Contracting Co. and was responsible for the construction of the detention vault, which was completed a few days ahead of schedule with no compromise on quality.

NewGen was founded by Erskin Harris and Mike Roussell in 2013, and the two principals have been in the engineering field for more than 20 years combined.

Darden said the entire team wanted to be sure of continuing Atlanta’s legacy in minority participation.

“In the 1970s, Mayor [Maynard] Jackson kicked this idea off, and

Atlanta has been on that track ever since,” Darden said. “Other cities have never caught up.”

Previous Article
Schools and Sprawl: The Impact of School Siting
Next Article
Just walk on by… by Kelly Jordan #6