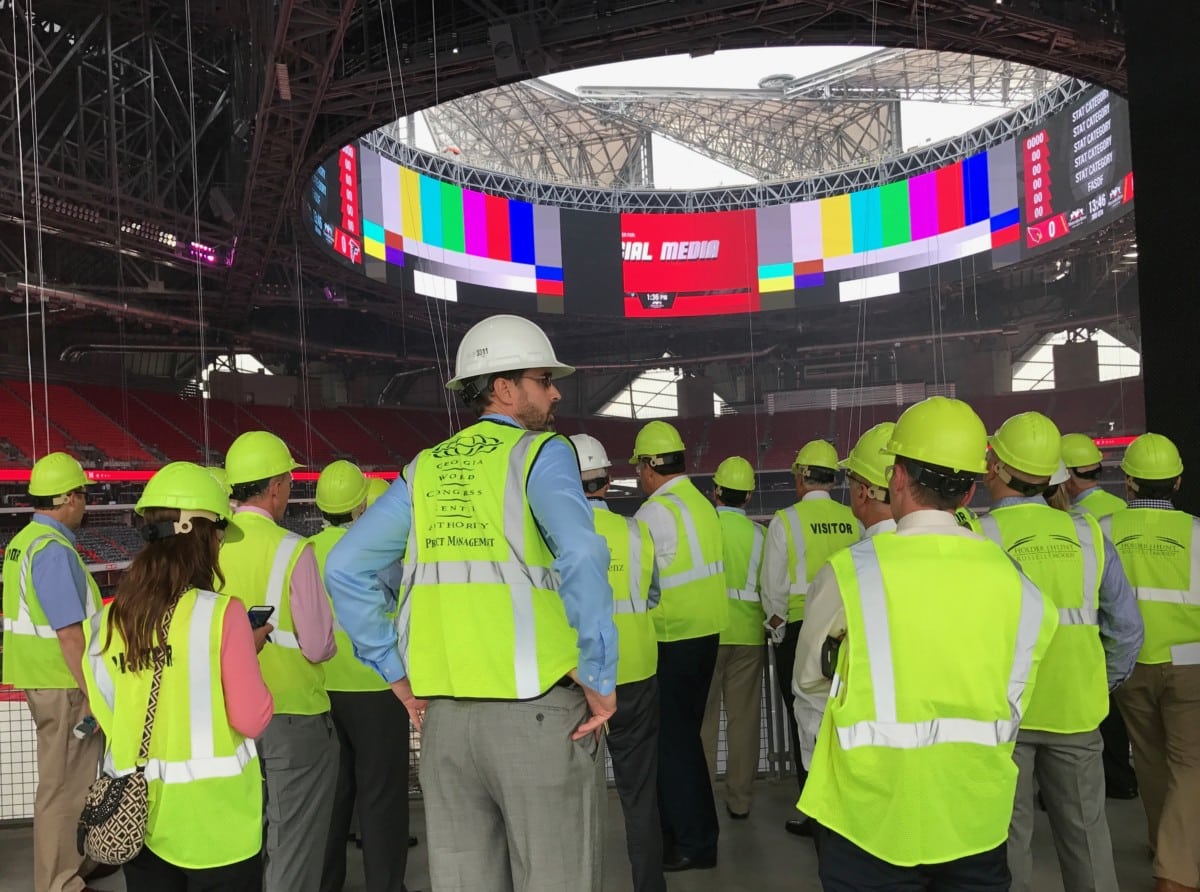 Atlanta Falcons President Rich McKay looked up to the partially-closed roof of the Mercedes-Benz Stadium during a tour on Tuesday with board members of the Georgia World Congress Center Authority.

“Not one drop of water can come in,” McKay said. That is the requirement of the NCAA when a Final Four tournament is played in a facility.

McKay then pointed to the edges of the roof “petals” that were being carefully moved from an open position to a closed position. 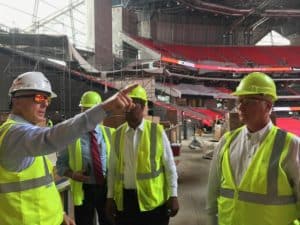 “See that white seal,” McKay said. That’s being installed to make sure there will be a water-tight seal preventing any rainwater from falling onto a basketball court.

The Mercedes-Benz Stadium roof has been the most talked-about feature since the first time the design was unveiled.

Atlanta Falcons owner Arthur Blank was so committed to having a retractable roof that he was willing to pay nearly an extra $600 million for a roof that would open and close – a feature that would not have been feasible in the soon-to-be-demolished Georgia Dome.

Steve Cannon, CEO of the AMB Group that oversees Blank’s for-profit entities, announced for the first time on Thursday that the roof’s opening and closing feature would not be fully operational during the first part of the Falcons football season.

The new $1.5 billion Mercedes-Benz Stadium will have its officially opening on Aug. 26 for the Falcons’ exhibition game against the Arizona Cardinals. But the roof will be in a closed position for at least the first 40 days as the mechanical elements of the roof opening and closing are automated. 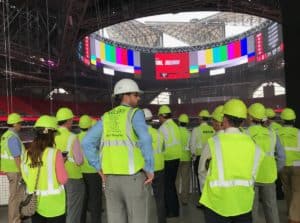 In the board meeting before the tour, Cannon said the process to open and close the roof currently takes about four hours as the contractors carefully make sure each of the 500-ton petals are moving in sync with each other along tracks that are perfectly positioned so there is a water-tight seal.

Right now the petals are moved in stages while tests are conducted on the mechanical structure. Cannon said the tests for the automation will have to take place in between the events that are planned in the first couple of months, so that what would have been a 40-day testing period will take longer.

The 40-day testing period ideally would have happened before the facility opened, but Cannon said construction delays crunched that schedule and led to the decision to keep the roof closed for the beginning of the season.

When fully-operational, the roof should be able to open and close within 11 or 12 minutes instead of the current four hours. The National Football League requires that a decision on whether a roof is open or closed be made 90 minutes before a game. Cannon said that Atlanta’s weather is too volatile with sudden thunderstorms to take a chance on having the roof open before it is fully automated. 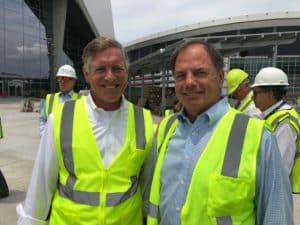 Interestingly enough, the news was taken in stride by the GWCCA board members and executives. Frank Poe, GWCC’s general manager, said the authority wanted to be sure the stadium would have a closed roof for its first major event in the facility – the Chick-fil-A kick-off games on Sept. 2 and Sept. 4.

As long as the roof can be in a closed position, Poe and his board are fine with the new stadium. And several expressed great confidence that the roof would be operational sometime during the fall.

“Short-term pain for long-term gain,” said David Allman, chairman of the GWCCA who is also a real estate developer.

Meanwhile, board members enjoyed touring the lower-level suites, seeing the circular halo board (which was being tested) and checking out the nearly completed restaurants and hospitality spaces. 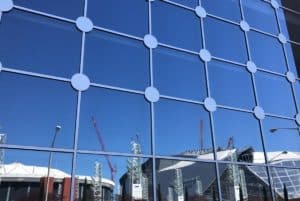 Meanwhile, Cannon told board members the Mercedes-Benz logo on the top of the stadium (when the roof is in a closed position) is the largest logo in the world – stretching over 100 meters.

“I think it can be seen from the international Space Station,” said Cannon, who in his previous job was president and CEO of Mercedes-Benz USA.

During the tour, State Rep. Calvin Smyre said he had an eerie, deja-vu feeling.  He remembered touring the Georgia Dome 25 years ago when it was in its final stages – working with then owner Rankin Smith and GWCCA Chairman John Aderhold (two men who have since died). 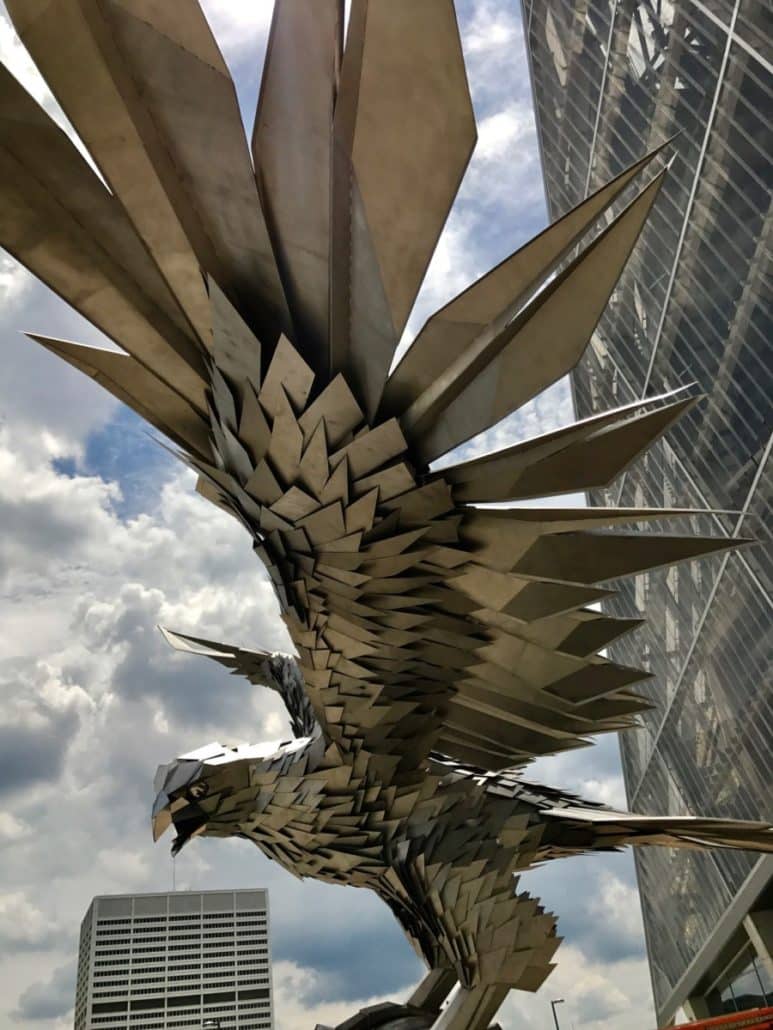