By Maria Saporta
As published in the Atlanta Business Chronicle on April 8, 2016

On Dec. 18 of last year, Dietmar Exler was planning to leave that afternoon with his family to fly to his home country of Austria for the holidays.

But at 4:30 a.m. that Friday morning, the phone rang. It was Ola Källenius, the global head of marketing and sales for Mercedes-Benz.

“Are you awake?” Källenius asked Exler, vice president of sales for Mercedes-Benz USA. “You are going to be even more awake in a minute.”

That’s when Exler learned that his direct boss, Steve Cannon, was leaving the company to become CEO of the AMB Group, the parent company of the Atlanta Falcons, the Atlanta United FC soccer franchise and other business interests owned by Arthur Blank, a co-founder of The Home Depot.

“We thought about it, and we want you to be president,” Källenius told Exler. “That’s pretty cool, isn’t it?”

Källenius laid out the plan. Cannon and Exler would have a town hall meeting with employees that Monday with a roll-out of the news. Of course he would have to change his flight to Austria.

“I didn’t need any coffee to wake up that day,” Exler said in a April 5 interview with Atlanta Business Chronicle about how he became president and CEO of Mercedes-Benz USA. “I’m fine with the way it happened. It happened so quickly I didn’t have time to say no. It’s a dream job.”

Mercedes-Benz USA already had made a big splash in Atlanta – moving its headquarters from Montvale, N.J., in mid-2015. Then in August, the luxury car company announced it was buying the naming rights of the new home of the Atlanta Falcons – which would now be known as the Mercedes-Benz Stadium. 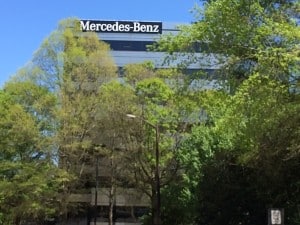 The current offices of Mercedes-Benz in north Atlanta

Exler, 48, now is heading the effort to promote the Mercedes brand in the United States. He also has oversight for Mercedes in Mexico and Canada.

At the same time, the company is building its new corporate headquarters near the Sandy Springs MARTA Station. The headquarters will have a courtyard surround by three buildings totaling about 200,000 square feet, which will include an onsite gym and daycare facility.

The headquarters – designed for a collaborative work environment – will open in early 2018 and house about 800 Mercedes-Benz employees.

When Exler describes his career, he does it in four words: lawyer, banker, car salesman. In 2002, Exler began working for Daimler Chrysler Financial in Europe until 2010 when he became vice president for Mercedes-Benz Financial Services USA, and he was based in Detroit.

Then in 2014 he got promoted to the vice president of sales and marketing for MBUSA – planning to move to New Jersey. At the time, Mercedes knew its facility in Montvale needed to be modernized, and the company would have to move during the upgrade. As they began to look for alternatives in New York and New Jersey, they began to question why they were limiting themselves to those two states. That’s when Mercedes started exploring relocating its headquarters.

The company considered a dozen cities, and then a top team of executives visited the three finalists before picking Atlanta in a “nearly unanimous vote.” So instead of moving from Detroit to Montvale, Exler came to Atlanta. His family is still in Detroit until his son finishes high school next year.

But Exler is someone who goes with the flow – trying to find the right balance in his job. When it comes to selling the Mercedes brand, he said the company tries to find the “right median between price and volume.” It could sell many more cars if they were cheaper, but it is protective of its luxury brand.

“Our benchmark on how well we are doing is based on us versus our competition. The competitor for Mercedes-Benz is BMW,” Exler said before citing the latest sales comparisons. “We were down 3 percent, and BMW was down 10 percent.”

The naming of the Falcons stadium was a way for Mercedes-Benz to quickly place its roots in Atlanta as well as marry a customer-focused brand with a team owner who values the “fan experience,” Exler said. “That resonated. It was a great opportunity.”

It just so happened that after the negotiations with Mercedes-Benz, Blank began looking for someone to become CEO of his business interests. Cannon, who had always loved sports, began talking about joining the organization. He knew that if he stayed with Mercedes-Benz, he likely would have to move to Germany.

But because of their respective roles, Exler and Cannon still get to work together.

“We want to be an active corporate citizen in the community and contribute our part in making the community better,” said Exler, adding that in the naming rights deal with Blank, Mercedes-Benz agreed to support the revitalization efforts on the west side of Atlanta. “We want to help turn it around and make it a better place.”

Exler said the company will continue to work with the Laureus Foundation, a global initiative based on Nelson Mandela’s belief that sports can change the world.

And on March 28, Exler sent a letter to Georgia Gov. Nathan Deal urging him to veto a highly controversial religious liberty bill, House Bill 757, writing that the bill “troubles us greatly. Mercedes-Benz USA and Daimler AG do not support legislation that directly or indirectly promotes any form of discrimination.”

Deal announced he would veto the bill the same day.

“In today’s world, we can’t discriminate as businesses,” Exler said in the interview.

Exler also is delighted the company selected Atlanta for its headquarters.

“I’m here full time,” Exler said, adding he still flies home to Detroit most weekends until his family is able to move south. “What I really enjoy about Atlanta is the Southern hospitality.”

He bought a townhouse, and a neighbor invited him to a birthday party. He also loves being part of the CEO circle in town, and he appreciates all the offers of help – including a referral for a barber.

“People are very nice, very friendly, very outgoing. We enjoy that. That’s the same experience our employees have had,” Exler said. “This is our corporate home. We spent 50 years in New Jersey, and we expect to be here in Atlanta for 50 years.”

Mercedes-Benz USA (MBUSA), headquartered in Atlanta, is responsible for the distribution, marketing and customer service for all Mercedes-Benz products in the United States.

MBUSA has the most diverse lineup in the luxury segment with 15 model lines ranging from the sporty CLA-Class four-door coupe to the flagship S-Class and the Mercedes-AMG GT S. (MBUSA is also responsible for Mercedes-Benz Vans and smart products in the U.S.)

MBUSA is in year four of the largest product offensive in the company’s history that brings 30 new models in a seven-year period. Nine new models will debut in 2016