The group was first given a bus tour of the communities of Tempe, Scottsdale and Phoenix, seeing first hand the desert-like landscape with a system of canals and lakes aimed at capturing every drop of water. Phoenix only gets an average of seven inches of rainfall each year.

The Atlanta Regional Commission selected Phoenix as the 2010 LINK city as a way to learn how another metro area has been able to manage a limited water supply.

But this trip had another ingredient — the scrutiny of an Atlanta television station.

CBS Atlanta sent investigative reporter Wendy Saltzman to meet the public and private officials as they disembarked from the buses to go to the Arizona Biltmore. 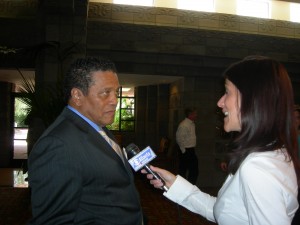 Saltzman said her editors had sent her out to Phoenix but they didn’t want her to be one of the paying members of the delegation because of a possible conflict of interest.

For the record, everyone pays their own way to go on LINK trips. The trips are three days of back-to-back informational sessions and on-site visits with leaders in each city.

Elected officials said it was important for people in Atlanta to understand that the LINK trips are essential in creating a regional mindset for our metro area and that it is anything but a junket. 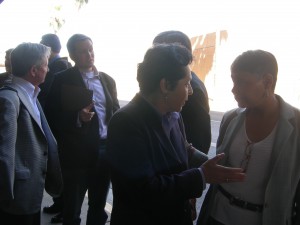 Mullen outlined the good, the bad and the ugly of Phoenix.

In the good territory, she mentioned the rebirth of downtown Phoenix, once described by the U.S. Department of Housing and Urban Development as the major city that’s most unlikely to recover. 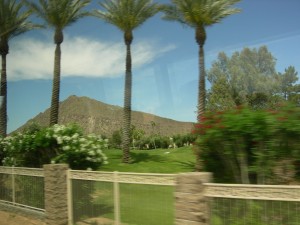 Other good developments include the expansion of Arizona State University, the University of Arizona Medical School, the opening of a new light rail system and the Science Foundation Arizona (similar to the Georgia Research Alliance).

The bad? “Our economy. It sucks,” Mullen said.

“Too much partisanship,” she said. “Too many kooks in elected leadership roles. That’s the hardest thing we have to deal with.”

Mullen was referring partly to the controversial and restrictive immigration bill that Gov. Jan Brewer signed into law last week.

Previous Article
Coalition for Early Education in Georgia to be formed
Next Article
Fast-growing Phoenix, like Atlanta, slows to a halt