Metro Atlanta leaders are heading to Austin for the annual LINK trip on May 4 — only six months after going to Chicago to learn how other cities are coping with the same issues as we are.

But the three-day Austin trip will stand out in one special way. It will be the first time since 2012 that an Atlanta mayor will be one of the 120 business, government and nonprofit leaders on the trip.

The presence of Atlanta Mayor Andre Dickens, who took office in early January, points to a more regionally engaged capital city. Dickens already has attended two board meetings of the Atlanta Regional Commission (ARC). His predecessor, Keisha Lance Bottoms, never attended one ARC board meeting in her four years in office. She also never went on a LINK trip, canceling a visit to Pittsburgh the night before.

In addition to Atlanta’s mayor, the mayors of Union City, Chattahoochee Hills, Decatur and Sandy Springs will be on the Austin trip.

“As I step into the leadership role, I’m most proud of the degree of engagement of our local voices that will be present on the trip,” said Anna Roach, ARC’s executive director who succeeded Doug Hooker in March. “The mayor of the City of Atlanta being there is significant. Having DeKalb, Fulton and others present will continue to drive our regional conversations about housing and transportation.” 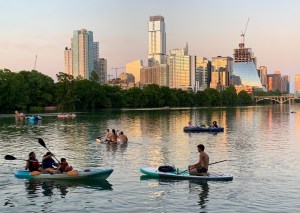 The LINK trip to Austin will be the 25th annual visit to North American cities facing similar challenges as metro Atlanta. The LINK trips began in 1997, and they’ve taken place annually with the exception of 2020 because of the COVID pandemic.

This will be LINK’s first trip to Austin, even though previous delegations have been to Dallas and Houston.

“We chose Austin because it’s one of the strongest and fastest-growing economies in the country,” said Melissa Roberts, ARC’s LINK program manager. “It will be interesting to learn from a city with rapidly-developing, technology-based industries, and more are coming all the time.”

The focus on technology enterprises dovetails with Atlanta’s increased presence of technology companies. Several high-tech leaders will be on the LINK trip, and Mayor Dickens has been a big proponent of developing Atlanta’s tech sector. 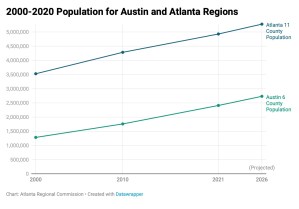 Austin leaders will be able to share the pros and cons of having a booming technology sector.

“Austin has been so successful that it has ended up with issues like affordable housing,” Roberts said. “They are having a lot of conversations about housing — wanting to make sure people aren’t being priced out of living in the city. A lot of people are relocating to Austin because Austin is still cheaper than New York and San Francisco.”

Mike Alexander, ARC’s director of the Center for Livable Communities, said technology companies are being drawn to Atlanta because of its diverse talent pool.

“Every economic development conversation I’m in, it is clear diversity is our strength in. Atlanta,” Alexander said.

A host of tech companies have said they are expanding in Atlanta in order to diversify their workforce. 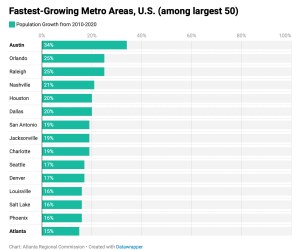 “It’s the reason we are attracting new development and new companies.” Said Roach, who credited Atlanta’s universities and diverse talent. “When we visit Austin and talk about diversity, that will be a strength for Atlanta.”

But leaders also know that Austin’s growth is leading to a scarcity in affordable housing, a growing problem in metro Atlanta.

“We are seeing housing prices escalate in metro Atlanta,” Roach. “It’s going to be critical.”

Although smaller than the Atlanta region, metro Austin’s population has tripled since 1990 to more than 2.3 million people.

“On a percentage basis, they literally have been the leader in the growth of jobs and population,” Alexander said. “But they don’t have the same scale as we do in metro Atlanta.” 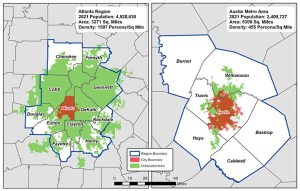 By comparison, metro Atlanta’s population is more than 4.9 million people.

Austin also is attracting a younger population, which is fueling the Texas capital’s growth and subsequent challenges.

One of the more dramatic investments underway in Austin is a $7.1 billion “Project Connect” to greatly expand the city’s transit system with investments in heavy and light rail.

Roberts said Austin sent delegations to Atlanta to learn more about our transportation issues and has worked closely with MARTA in putting together its “Project Connect” plan, which has been approved by voters.

“It’s a complete overhaul,” Roberts said, adding it is a holistic plan. “It will include extensive anti-displacement funds as well as support for parks and green space. They have learned a lot by coming to Atlanta.” 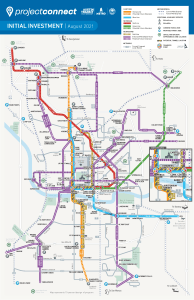 Roach metro Atlanta leaders will be able to discuss upcoming infrastructure investments in our region.

“These are once-in-a-lifetime opportunities,” she said. “How are we prioritizing these investments?”

The LINK program will include two different visits with Austin’s Mayor Steve Adler, including at the Wednesday evening opening reception and dinner when he’ll be introduced by Mayor Dickens.

Roberts said the metro Atlanta delegation will hear 15 different discussions on issues facing Austin during the three-day trip, and there will be two sessions for Atlantans to debrief on what they’ve heard and seen.

Roberts said the program will highlight what makes Austin unique, such as the “Keep Austin Weird” mentality. “We want people to walk away having learned about Austin,” she said. 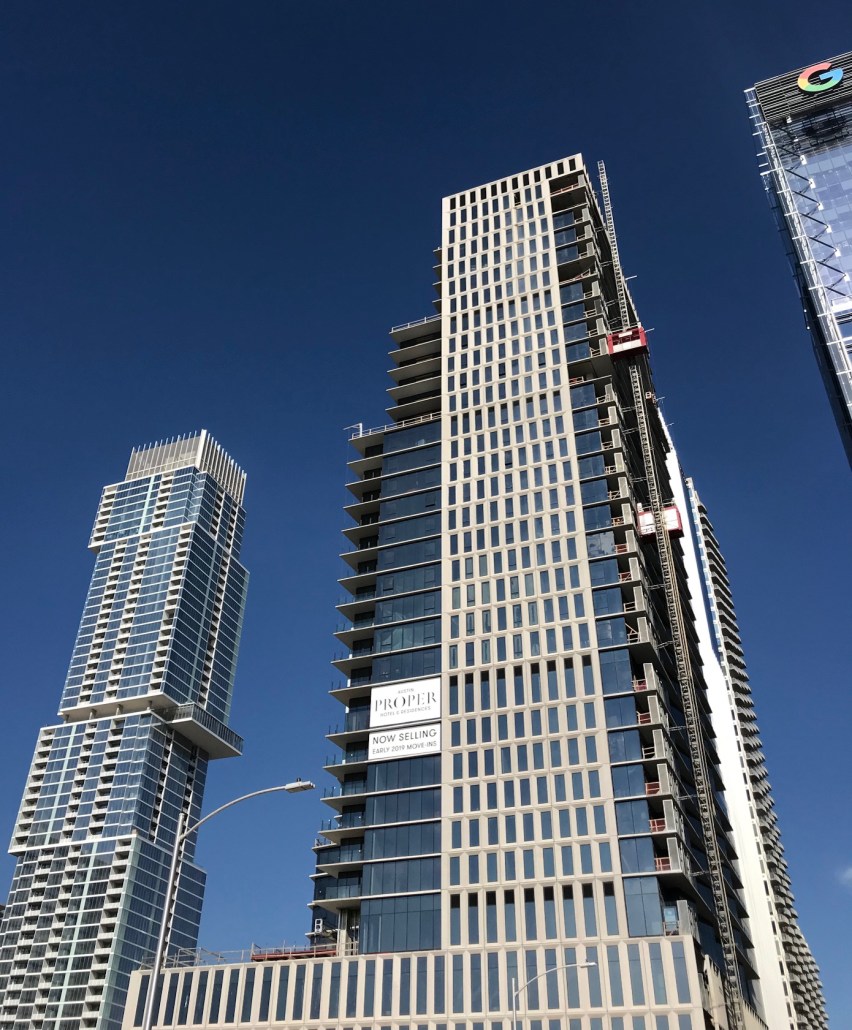 Previous Article
Election workers on their own when facing threats, accusations of misconduct
Next Article
Not everyone in Atlanta was pleased