When regional Atlanta leaders traveled to the Washington, D.C. metro area for the 2012 LINK trip, it was hard to contain their excitement and anticipation.

In just a few short months, the Atlanta region would face its moment of truth of whether it would invest in a transportation system that would lead to the transit oriented development they were witnessing in downtown Washington, D.C. and the booming suburb of Arlington, Va. 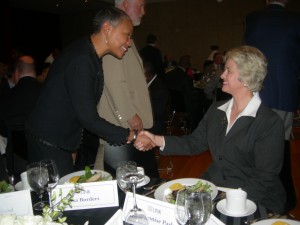 But if the regional transportation sales tax were to be defeated, Metro Atlanta Chamber President Sam Williams said at the time: “We don’t need to go on another LINK trip. We should just go to a funeral.”

A year later, Atlanta’s regional leaders went to the Greater Houston area where they witnessed a region that was growing faster than the rest of the nation, often topping economic development rankings among metro areas. They also saw a region where voters had consistently voted to invest in their transportation and quality of life infrastructure.

So is the Atlanta region adrift with no direction, leadership or consensus in sight? 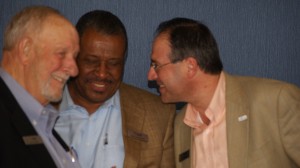 Mike Bodker, mayor of Johns Creek, answered no. The Atlanta region is undergoing a period of “recalibration,” he said. And such recalibration can be a healthy process.

Armchair critics like to question why 110 metro leaders even go visit different cities every year to see how other communities are investing in their transit systems, their cultural institutions, their parks and trails, and working on regional alliances when it seems as though the Atlanta region keeps treading water.

But each LINK trip gives Atlanta leaders an opportunity to look in the mirror and take stock of where we are and where we want to go. 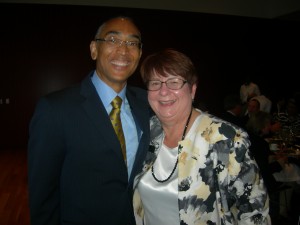 Most importantly, the LINK trips provide a safe place where leaders from around the region can get to know each other, exchange ideas and build respectful relationships and genuine friendships. Needless to say, no real progress can occur in this region if those relationships don’t exist.

The Houston trip seemed especially painful because the largest city in Texas is successful in several sectors that metro Atlanta is targeting, such as  the biomedical and health care industry as well as transportation and logistics. And, not unlike Atlanta, it is an economy that has been built on the industry of growth.

Yet Houston kept growing while Atlanta’s growth slowed — creating a hardship on all our growth-related businesses, such as construction and banking. 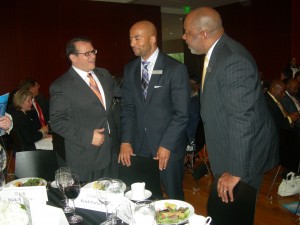 After hearing Houston economic development leaders, Tedra Cheatham, executive director of the Clean Air Campaign, said they all seemed to have swagger while Atlanta has seemed to have lost its swagger.

Needless to say, it is extremely uncomfortable for metro Atlanta leaders to talk about not being at the top of their game. 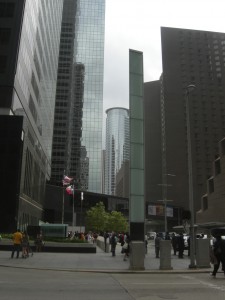 Even though the defeat of the regional transportation sales tax is now almost a year old, there’s little community appetite to really do a deep dive to explore why it failed and what lessons we could learn from that experience so we could succeed the next time around.

I would venture to say that we really can’t move forward until we really have an honest and open community conversation about what happened and how we can avoid failure in the future. It’s like letting an infected wound fester without being treated.

That said, I am not among the ones who has given up on Atlanta. Quite the contrary.

In Houston, I saw a region that was driven by a love of money and wealth. The motivator for implementing quality of life initiatives was a realization that it could no longer keep attracting companies on the promise of just making money. They would have to dress up the area with parks, trails, public art, theaters, museums and sports facilities. 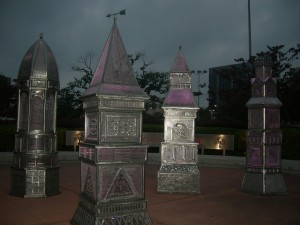 Houston is fortunate to have a high concentration of millionaires who have been willing to invest their fortunes in the community, which certainly has made it a better place to live and work.

But walking around downtown, parking lots and garages taken much of the life from the city streets. And an extensive network — seven miles — of underground pedestrian tunnels has made the sidewalks relatively void of people. 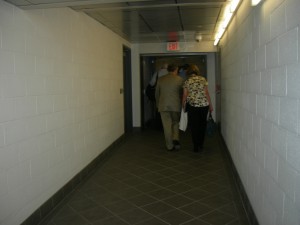 Downtown Houston has seven miles of underground pedestrian tunnels so people don’t have to walk outside (Photo: Maria Saporta)

In talking to people who have lived in or traveled to Houston extensively, I told them that it felt as though Houston had no soul. They did not disagree.

That is where Atlanta can and should excel — if we have the wisdom to recognize our innate advantage.

On the Sunday following our return from Houston on Saturday, President Barack Obama was the commencement speaker at Atlanta’s historic Morehouse College. The statue of Benjamin E. Mays, who was president of Morehouse and a mentor to Martin Luther King Jr. when he was a student, looked over the crowd. But most importantly, the lessons of nonviolence, equal opportunity and justice blossomed on the Morehouse campus and in Atlanta.

The next day at a Buckhead hotel, CARE USA, the World Affairs Council of Atlanta and the Center for Strategic and International Studies in Washington, D.C. held the second annual Global Health Summit in Atlanta. This year, they were tackling world hunger.

When Atlanta is at its best is when it is that City Too Busy To Hate, that city busy finding ways to make the world a better place for every one, and when it has realized that there’s more to business than just making money. 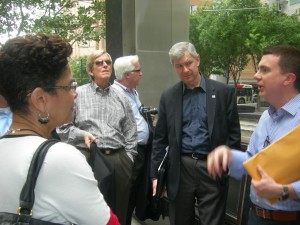 And because our institutions — corporate, academic, government and civic — aspired to the higher goals of humanity, they ended up being rewarded in economic returns.

Take the Civil Rights movement. We can now look back and see how having an enlightened view on integration was a strategic economic policy that set Atlanta on a course of prosperity that lasted for decades. But during the 1960s, the outcome was not nearly as clear. Our leaders took a progressive point of view because it was the right thing to do.

Today, we are at another pivotal moment where we have some of the world’s most influential institutions working on the issues of global health and development. These are natural extensions of Atlanta’s historic leadership in the areas of civil and human rights. 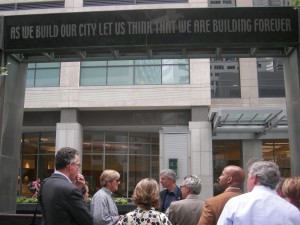 Engraved in stone at key downtown plaza: “As we build our city let us think that we are building forever.” Preservation Houston’s Parsons tells us that ironically the block used to have historic theaters and a hotel, some replaced by garages (Photo: Maria Saporta)

Yes, the Atlanta region is in a period of recalibration. There is much work to be done to reinvest in our transportation and our quality of life infrastructure. We have to figure out how to get all our different governments and business organizations to work together for a common purpose. We have to have tangible progress in public education from birth to higher education.

And we have to be willing to openly discuss our shortcomings and failures in a constructive way so we can work toward the future.

But, when all is said and done, Atlanta has something many other communities would love to have. We have a soul.

Here are all the columns and stories on the 2013 Houston LINK trip that have appeared in SaportaReport and the Atlanta Business Chronicle (in chronological order):

Previous Article
Atlanta’s new answer to reducing homelessness: Create a non-profit organization under mayor’s control
Next Article
Let the U.S. Constitution be our guide as we protect our nation’s security