Metro Atlanta would benefit from creation of Export/Import Highway

Why should Metro Atlanta residents and business leaders care about a little known proposed highway between Macon and LaGrange?

Because without it, freight traffic on Metro Atlanta’s roads and rail will increase by as much as 300 percent once Savannah’s Harbor is deepened in the next few years. That’s right. Triple the traffic that’s already there.

That’s the bad news. But there is good news for Metro Atlanta. A lot.

If built, “Georgia’s Export/Import Highway” not only will re-route those trucks around metro Atlanta and away from its commuters, but it will also strengthen Georgia’s long-term economic competitiveness in global trade by improving our state’s logistics infrastructure and intrastate commerce. And guess where the Southeastern United States’ logistics capital is? That’s right – Atlanta.

So what and where is this highway?

Georgia’s Export/Import Highway is a proposed multi-lane highway connecting I-85 near LaGrange to I-75 near Macon and is gaining support among industry and political leaders as a project that needs to be fast-tracked as an economic benefit to the entire state. The corridor could serve as a logical east-west continuation of I-16 and a parallel alternative to I-20 providing a direct route across the state from the port of Savannah to central and west Georgia. 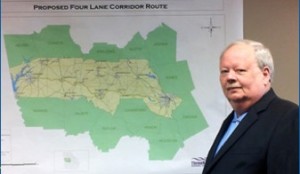 This highway would relieve the increasing congestion along I-75, I-285 west, and I-20 specifically within metro Atlanta where – as mentioned above – freight traffic is expected to triple beginning with the completion of the deepening of Savannah’s harbor.

What are the specific benefits to Georgia and metro Atlanta?

The highway is critical to the economy of metro Atlanta and Georgia because it connects east, central and west Georgia manufacturers, exporters and importers. The port of Savannah and other ports along the eastern seaboard are racing to deepen their harbors to make room for supersized cargo ships expected to begin arriving via an expanded Panama Canal in 2015. This highway will provide the only direct east-west connection between the port and major west central Georgia importers and exporters like KIA Motors America, Inc., its suppliers, and 10,000 related jobs around West Point, Ga.

Producing more than 360,000 vehicles per year, the KIA plant has a $4 billion dollar per year economic impact on Georgia, and the plant has directly or indirectly created over 10,000 jobs in Troup County and the surrounding areas. As Georgia’s automotive industry grows, many of those related jobs are created in metro Atlanta for corporate, logistics and global sales operations and support.

And in case you’re wondering, this project isn’t just another “road to nowhere” with little or no benefit to the entire state. According to the Georgia Department of Transportation, Georgia’s Export/Import Highway is expected to provide the best return on investment of all statewide highway corridor projects, generating a return of $18 to Georgia for every dollar invested. Experts say the corridor will generate an annual economic impact of $11.3 billion and the potential creation of 2,738 new jobs for Georgia.

So, what’s the hold-up? What’s the next step?

We are encouraging citizens, business and elected leaders across Georgia to persuade GDOT to authorize and fund a corridor study this year to identify feasible location and alignment alternatives for the project between LaGrange and Macon. This first step will unlock any potential federal funding and allow us to seek new sources of public and private funding. It’s a small and inexpensive step to take – but one that’s needed to move forward because time is of the essence.

As the port’s deepening inches closer to reality, every day that passes without the study is another day lost to effectively manage the tripling of freight traffic in Metro Atlanta once it comes off those super-sized cargo ships.

In recent years, we’ve seen unprecedented bipartisanship and a coming together of the “Two Georgias.” We’ve witnessed our state and congressional leaders rallying behind the support of Savannah harbor’s deepening because everyone could see the benefits of that project to the entire state. But we can’t stop there. We must now focus on strengthening Georgia’s freight and transportation infrastructure to move those products across the state seamlessly.

Now is not the time to drop the ball. Now is the time to support Georgia’s Export/Import Highway because it’s the one project where everyone wins.

The Three Rivers Regional is one of the groups leading a coalition of business and community leaders in support of Georgia’s Export/Import Highway. For more information and ways you can help, visit www.georgiasexportimporthighway.com.