Thurmond, who lost his race as the Democratic candidate for U.S. Senate in November, said he had been talking to one of the firm’s founding partners, Jim Butler, about possibly joining the firm if his Senate bid did not succeed.

“I would have had to be a complete dunce not to know that it was a long shot campaign,” Thurmond said in an interview Monday. “I had to have a Plan B, and this was a perfect fit.”

In his role with the firm, Thurmond’s practice will focus on serious personal injury cases, products liability, class actions and whistleblower claims.
Thurmond also will lead the firm’s ongoing efforts to education and inform the public of its legal rights under state and federal law. The firm has offices in Atlanta and Columbus.

“I talked to Jim right after I announced that I was running for Senate,” Thurmond said. “They’ve been strong supporters of mind for years. And I’ve always admired their commitment to representing people who have been wronged.”

Then Thurmond added: “This is what I did before I became a politician.”

Thurmond served as the state’s labor commissioner for 12 years, building a national reputation for his “Georgia Works” initiative, which helped to retrain the unemployed by placing them in temporary positions in the private sector.

“We are honored to have Michael Thurmond as part of our firm,” Butler said. “We believe his decades of pubic service, legal acumen and communication skills make him uniquely qualified to advocate on behalf of our clients.”

Thurmond said that one reason he was drawn to joining the firm was because one his “key responsibilities will be to inform and educate the public of their rights.” That will permit him to continue having a platform of speaking to local and national groups about his passions.

“I’ve spent my whole life trying to level the playing field,” Thurmond said. “I’m so appreciative of Butler, Wooten & Fryhofer being generous enough to offer me this opportunity.”

Butler said his firm welcomed Thurmond’s continuing public contributions. “I don’t see how you could keep Michael Thurmond from doing that,” Butler said. “And that’s what we do in our law practice. We help people.”

During the campaign, there had been conversation that Thurmond might join the administration of Barack Obama, an offer that had been extended to him when he was labor commissioner.

“Obviously, I would have preferred being in the U.S. Senate,” Thurmond said. “Other than that, I’m enjoying not being in elected office right now.”

Asked if would ever seek public office again, Thurmond laughed.

“There’s only one known cure for political ambition,” he said, “and that’s formaldehyde.” 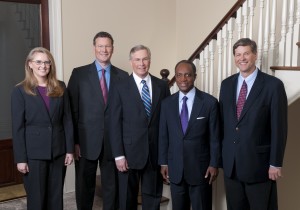