A community member offers his feedback at the Microsoft town hall in Grove Park. (Photo by Mark Lannaman.)

Microsoft held its first meeting with neighborhood residents for the planned 90-acre campus coming to Grove Park this past Saturday.

The Microsoft Campus Community Workshop brought together hundreds of neighborhood residents, Microsoft employees and partners including Cooper Carry and Integral Group to envision the future of the campus, and of Grove Park.

Residents gave their input at a total of nine stations — process and schedule, transportation and mobility, accessibility, Proctor Creek site ecology, digital presence, housing, commercial and retail, greenspace, and “the people.” Guests used colorful stickers and sticky notes to leave feedback which included desires for grocery stores, youth opportunities and transit options such as light rail or connection to the Beltline.

Microsoft and its partners have emphasized the project should be community-focused. Saturday’s workshop was just one of the ways they have tried to center the residents of Grove Park.

Mike Lawings, senior director of American real estate and facilities for Microsoft, said he was excited by the turnout of the event — a ‘listen and learn’ opportunity, as he described it.

“There’s a fantastic turnout today,” Lawings said. “This is one of three town hall sessions that we’re having. And the whole idea here is just a listen-and-learn opportunity,” said Lawings, adding that the input will be taken into consideration for the next meeting in September.

Like many neighborhoods going through rapid changes due to an influx of development, concerns of lower-income residents —often residents of color — being pushed out of the community are prevalent. Lawings says he recognizes these concerns and hopes these town halls can reduce fears.

Microsoft has previously said 25 percent of the housing in the 90 acres will be affordable housing “and other key community initiatives.” The language used at the town hall differed slightly.

“What we’re saying is that out of the 90 acres, 25 percent of that is for a community-driven approach. So that’s not saying 25 percent is affordable housing,” Lawings explained, saying grocery stores, banks, medical facilities and more can fall under community-driven development. 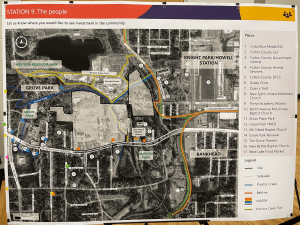 A map at the “people” station where residents could leave feedback. (Photo by Mark Lannaman.)

Not everyone is sold

Some, like longtime Grove Park resident Micheal Mapp, argue the effort is there from Microsoft, but only certain groups are being reached.

“The only people showing up are business people. The “community” does not attend these meetings. So the real question is why?” Mapp said.

Mapp believes that some community members are still hesitant of the engagement, thinking the meeting is nothing more than a PR move.

“Everybody’s coming to town on a white horse, but they’re not really here for the community,” Mapp said. “Maybe 10 percent of the community will benefit, and people in this community understand that. So they have other things to do.”

Still, Mapp remains optimistic for what Microsoft can bring to the area.

“I think Microsoft, in short, has the opportunity to do something different. To give a little more back than what’s typically expected, because they have a global view, and they have funds to do so,” Mapp said.

Some argue rent control and affordable housing are some of the ways Microsoft can help mitigate housing problems for the new apartments slated to be built in and around the campus. Mapp agrees, but also would like to see an emphasis put on the residents who are already there.

“What I’d like to see them do is help more current homeowners. Renting… that’s one area to talk about — renting. But there’s no power that comes from renting. So what you need is retention,” Mapp said.

A model for others

Egbert Perry, CEO of The Integral Group, has experience in revitalization. In the 1990s, he was part of a team who helped convert the first public housing complex in the United States — Techwood Homes — into Centennial Place after Techwood Homes became blighted.

Perry feels more developers should take note of the efforts Microsoft is making to build with community input.

“[The workshop] was open to any and everybody who had an interest. A lot of people [who] wanted the opportunity to express themselves, they’ve done so,” Perry said. “It’s highly unusual for any company to invite this many people in, so this is a significant statement from Microsoft as to the kind of engagement of the community they want in this project.”

Perry believes Microsoft is setting a new standard and model for other large corporations to invest and engage in communities, and that Microsoft’s partnering with the City of Atlanta will help ensure affordable housing is not left behind.

“The city [of Atlanta] has a very clear commitment to affordable housing,” said Perry. “There is an integration of housing affordability, as an integral part of the vision for how housing will be developed.”

Microsoft plans to take the feedback from the event and incorporate it moving forward, but it’s unclear exactly what that will look like. The workshop is the first of three planned, with the second likely coming in September. Residents hope to see some of their input incorporated into the coming meetings and specifics of the site plan that emerge.