Cities can be fanciful and fun.

In fact, if we want our cities to be loved, they must spark our imagination, bring smiles to our faces, give us special memories we can keep forever.

That was the message that Peter Kagayama shared with members of the of the Midtown Alliance at its annual meeting on the morning of Feb. 26 at the Fox Theatre.

Kagayama, who is based in Tampa, is co-founder and producer of the Creative Cities Summit. He has written a book: “For the Love of Cities,” a guidepost for how cities can become more loveable.

“Cross borders, cross nations, people are remarkably similar,” Kagayama said, adding that we all hate traffic, parking, bad design and potholes. Yet people won’t fall in love with their city if it just fixes its potholes.

“Citizens aspire for more,” Kagayama said. First cities need to be functional and safe. Then they need to be comfortable and fun. “Where is the fun? That’s a question that needs to be asked more in city-making.”

It starts with making our cities human and not designing it for the car. 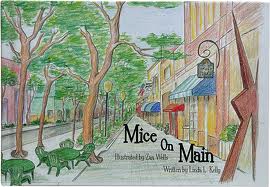 Cover of book: “Mice on Main”

“A walkable city makes a city lovable,” Kagayama said. “Walking allows for  improvisation and discovery. When you are driving, you don’t want improvisation. Get out of the car. We interact with each other. A dog-friendly city makes a city lovable. It helps us engage with each other. If you don’t have a dog and you cross paths with someone, you grunt. Dogs provide a sense of safety.”

Cities can’t underestimate the value of “small things,” Kagayama said — comparing how cities and its citizens can leave love notes to each other. A wonderful way to get leave those notes is by using words like “temporary” or “pilot” to experiment new ideas.

For example, if a community can’t afford to have an elaborate, interactive water fountain, it can use a garden hose where children can play and get wet during a hot summer day.

“Play is really important. We need to have the ability to play with our cities,” Kagayama said, adding that public art can surprise and delight visitors and residents alike. 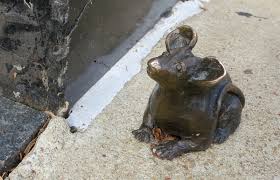 One of the popular mice on Main Street in Greenville, S.C.

And it doesn’t have to cost a lot of money.

In Greenville, S.C., in the year 2000, Jim Ryan proposed the idea of installing a family of nine unique mice sculptures along Main Street — a project that cost just a couple of thousand dollars. Now “Mice on Main” has become a major tourist attraction, and it has brought an element of fun to the South Carolina city — including its own book, T-shirts and other memorabilia.

Kagayama brought up another example of a citizen’s love note — Candy Chang of New Orleans. After all the hardships that New Orleans has experienced since Hurricane Katrina and the recession, Chang wanted people to feel better about her city. 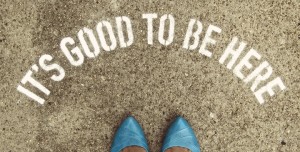 So she took a 25” by 10” stencil drawing the outline of “It’s Good to be Here,” which she spray-chalked on the pavements of her neighborhood. Her goal was to help people take time to appreciate the city of New Orleans.

The last example Kagayama mention was Rob Bliss of Grand Rapids, Michigan. When Grand Rapids was declared to be 10th among America’s “dying cities,” Bliss took it upon himself to raise the money and citywide support to create a “lip dub” nine-minute video that involved more than 5,000 people lip-synching to Don McLean’s “American Pie.”

It became one of the most-viewed videos on the internet — clearly sending the message to the world that the people of Grand Rapids disagreed with the notion that their city was dying. The $40,000 video was shot in one take with one camera and involved the virtual shutdown of the downtown area.

The lesson for Atlanta is that our heroes may not be the leaders in our midst but the “unofficial city makers.” Atlanta, and all cities that want to be loved, must figure out how to nurture the folks who make our cities fun.

He then showed a photograph of a group of people with gigantic bubble blowing machine blowing bubbles in front of the Federal Reserve Bank of Atlanta.

“We need some spicy people in our communities,” Kagayama said. “We as the leadership of the community need to be okay with that. These people are already here. They have to get in the game. It’s on us. It’s on the people who love a place. We put up too many barriers. We need more people who say they love Midtown, and emotions are contagious. When we love things, we will forgive their shortcomings.”

Kagayama’s words were inspring. I even have an idea of what words I want to stencil on the sidewalks all over town.