Midtown Atlanta going from Blueprint to Greenprint to an urban ecodistrict

By Guest Columnist KEVIN GREEN, president and CEO of the Midtown Alliance

Depending on whom you ask, the term “sustainability” can have vastly different meanings. In the context of a dense, urban community, it goes much deeper than merely satisfying environmental concerns. Start with what the market is telling us.

Witness how LEED certifications and Energy Star ratings have now become synonymous with Class A office buildings. As investors seek profitable, low risk assets, they see “green” buildings consistently outperform their peer “non-green” buildings in key areas like occupancy, sale price and rental rates, not to mention operating costs. So in this context, sustainability is also about profitability.

Beyond buildings, sustainability has become a market differentiator for cities and districts as well. The City of Atlanta gets it, embarking on the bold Power to Change plan, which sets ambitious goals to reduce greenhouse gas emissions, waste and energy use, among others.

We also know that a growing segment of people want to drive less, walk more, and have more options to get around. More college-educated 25-34 year-olds – the talent that is (or soon will be) driving the economy – want to live and work in city cores. They want access to transit, bike lanes, and those “third places” like coffee shops, parks and restaurants. For them, sustainability entails connectivity and a sense of community – creating places people want to be and experiences they love. 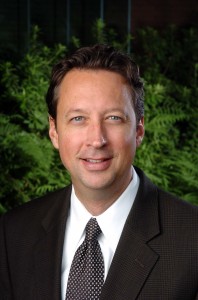 In 1997, Midtown Alliance spearheaded Blueprint Midtown, a community vision for future growth. The plan called for transforming Midtown from a place where more than 60 percent of the land was surface parking lots into a vibrant, walkable, urban district. Since then, we have implemented improvements including over 12 miles of new sidewalks, and streetscapes including 750 new trees. We’ve seen billions of dollars in new investment and 36 major development projects in the Midtown core of about 1.2 square miles.

Recently our leaders asked us to consider placing a “green lens” on the Blueprint. We were challenged to identify a strategy that would not only allow us to be better environmental stewards, but also enhance our sense of community and advance Midtown’s market position.

To this end, earlier this year the Midtown community galvanized around a collective vision for sustainability through Greenprint Midtown. We captured input from residents, business owners, employees, property owners and subject area experts. Among the findings: 86 percent of those who live or work in Midtown believe pursuing sustainability is important to Midtown’s continued success.

We’re fortunate. Midtown has the building blocks in place: From a pedestrian-friendly street grid and robust transit options; to a balanced mix of land uses and significant green space. What was missing was a district-level plan to define a path forward and prioritize future action. Through the Greenprint report, we identified and prioritized strategies in five key areas: energy, water, waste, open space and transportation. These strategies had to be practical, implementable, impactful, measurable and financially-feasible. So now we are committed to creating the Midtown EcoDistrict.

Ecodistricts are taking hold in communities from Washington, D.C. to Portland, Oregon. They up the ante on sustainability by setting ambitious goals, committing the effort to achieve these goals, and tracking results. Their success lies in partnerships – a coalition of the willing, working together. Through the Midtown EcoDistrict, we will green-up our own programs and elevate the sustainability efforts of our businesses, institutions and residents.

The actions of Midtown’s institutions and businesses are already inspiring. More than 30 buildings have LEED and/or Energy Star certification. The Midtown headquarters of Perkins+Will boasts the highest scoring LEED-certified building in the Northern Hemisphere. Fifteen Midtown properties are participating in the Atlanta Better Buildings Challenge,Turner Broadcasting System offers one of the most comprehensive commute options programs in the region.

And restaurants owned by the Fifth Group are recycling and composting at least 95 percent of the product that comes through their doors. Anchor institutions – Woodruff Arts Center, Atlanta Botanical Garden, the Fox Theatre, and Georgia Tech – lead the way through vegetated roofs, energy efficiency and water conservation.

Midtown Alliance is already acting on the findings in the Greenprint, expanding our bicycle network with four miles of new bike facilities, and implementing another 12 miles of streetscape and sidewalk improvements.

So far, we’ve installed 50 recycling cans and partnered with the City of Atlanta for collections. A 3,000 gallon cistern collects rainwater for irrigating Midtown’s trees and landscaping. We recently expanded our green space, adding a temporary park at 18th Street and West Peachtree Street through a partnership with Jamestown Properties and the John Marshall Law School, and a plan is underway for a low water demonstration garden designed by the Atlanta Botanical Garden.

There is more to it, and more to come.

As we embark on this course, we have a lot of work to do, and a lot to learn along the way. But we are convinced that the journey is worth it.