The students have spoken, and the winner is: Midtown High School.

The Atlanta Public Schools released the results of a formal voting process undertaken among students at Grady High School on their preference on what to rename the school.

An overwhelming majority of students – 61.4 percent – ranked “Midtown High School” as the first choice, according to Ian Smith, APS’ executive director of the office of communications and public engagement. 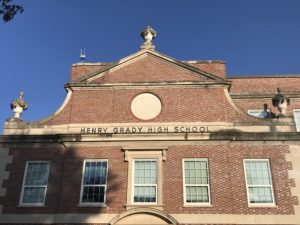 The results of from the student voting on the renaming essentially ends the long, controversial battle on what the high school should be called.

Students were given three choices: Midtown High; Ida B. Wells High or Piedmont High. Only 19.8 percent of the students selected Ida B. Wells, which had been the choice of the renaming committee, chaired by Leslie Grant, who represents the area on the Atlanta Board of Education.

The choice of Piedmont High received 18.8 percent of the students’ votes.

The renaming committee, which started meeting in the summer, quickly decided to strip the Grady name off the high school because it said Henry W. Grady, editor of the Atlanta Constitution in the1880s, was a white supremacist.

Hundreds of alums passionately pleaded to keep the Grady name on the school, but the committee removed that as an option – even as a hyphenated name.

A survey of 1,619 community stakeholders released in October showed that 42.7 percent favored the name Midtown from a list of five options. But the committee decided in a 4- 3 vote to recommend renaming it after Ida B. Wells, a Mississippi born Black journalist and civil rights leader who died in 1931.

Because that recommendation was so controversial, Grant and other members of the Atlanta Board of Education decided at a Nov. 2 meeting to let current Grady students vote for their preference of the top three names.

At the time, Grant basically said the board would go along with the students’ choice and vote for the name change at its Dec. 7 board meeting.