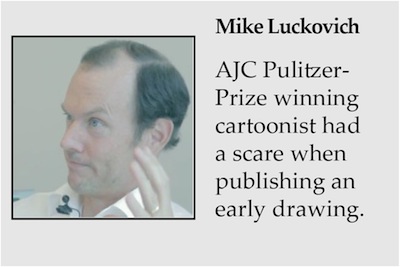 Ruffling feathers with a cartoon isn’t unfamiliar territory for Atlanta Journal-Constitution editorial cartoonist, Mike Luckovich, but his approach to his cartoons was permanently defined by a high school Moment.

Luckovich was a sophomore in high school at Sheldon High School in Eugene, Oregon and had just begun drawing cartoons for the school newspaper at the time of his Moment.

He joked, “In high school, believe it or not, I was not a very big guy” and described how the rest of his peers towered over him – even the Sheldon High School cheerleaders. “So I did this cartoon – I don’t know what I was thinking,” he said.

The cartoon depicted a freak museum with a billboard marquis that read: “Freak Museum: featuring Snerdily the boy with three nostrils, Melvin the deformed hippo and main attraction: The Sheldon Cheerleaders.”

The cartoon ran in the next edition of the school’s paper and as one can imagine, it was not universally well received. Teachers banned the cartoon from their classroom and the drawing became the main topic of conversation among his high school peers.

The backlash turned Luckovich’s thoughts to the perspective of the Sheldon cheerleaders.
“I was scared,” Luckovich said. “Those cheerleaders were so much bigger than me – I thought they were going to beat me up.”

As many can relate when looking back on their high school years, it was a time of naivety in which clear thinking and the consideration of others was not first and foremost. He moved past the fear of the cheerleaders beating him up out of anger and realized he had done more damage than making them angry – he had hurt their feelings.

“It was so mean and thoughtless, but when you’re a kid you do a stupid cartoon like that,” he said.

He personally apologized to each of the cheerleaders and allowed the incident to be a learning experience. “I realized I had the power to hurt people and pull people into a cartoon that really didn’t deserve to be in a cartoon,” he said.

While he admits it sounds miniscule now, it was a defining moment that would steer his approach in his cartooning career.

After high school. Luckovich attended college at The University of Washington and graduated in 1982 with a degree in political science. Unable to find an editorial cartoonist job out of school, he spent two years selling life insurance during the week and freelancing, often without pay, for various suburban Seattle publications on the weekend.

He landed his first cartoonist job in Greenville, South Carolina where Mike and I both worked at The Greenville News. Our offices were just a few doors from each other on the same hallway. I remember hearing Mike and his then-editor, Tom Inman, having heated discussions over Mike’s ideas for editorial cartoons. Mike’s politics run a little on the liberal side and The News was a relatively conservative newspaper in upstate South Carolina. Mike’s patience ran thin and he only remained there for nine months before moving to New Orleans for a job at The Times-Picayune. He moved to Atlanta and joined the Atlanta Journal-Constitution in 1989 and has been there since.

Luckovich’s cartoons are distributed nationally by Creators Syndicate and appear in more than 350 daily publications. He is a two-time Pulitzer Prize winner and holds the award for editorial cartooning for 1995 and 2006.

Through his success, Luckovich keeps the guiding principles he learned from the backlash of the freak museum cartoon in his mind. He explained, “In editorial cartooning, you want to aim and you want to hit your target, and you don’t want to cause collateral damage.”

For Luckovich, his targets include those in the political arena. “I feel like politicians, they are in the public arena, they are fair game,” he said. “I try and focus on them and leave out the innocent people who, for whatever reason, may be in a political issue through no fault of their own. I don’t hit those people directly.”

However, this approach has not left him free of controversy. Luckovich described negative responses to some of his cartoons.

“Sometimes symbolism of a cartoon can overwhelm the message you are trying to get across,” he said. “Sometimes you have this really tough imagery that people can’t get – that’s usually what happens with a cartoon when people get really pissed off.”

Regardless of the imagery or context of the cartoon, Luckovich’s target remains the most significant element. To succeed, he must hit his selected target – one that now doesn’t include the innocent, such as the Sheldon High School cheerleaders.

“I realized I have a weapon – if it isn’t aimed right, I could really do some damage and hurt innocent people.”

Next week in Moments: Larrie Del Martin, president and CEO of Atlanta Habitat for Humanity