By Guest Columnist ANDREA LAUER RICE, president of the Hungarian American Coalition and founder of the Atlanta Hungarian Festival.

This fall, Millennium Gate Park became home to the first-of-its-kind female freedom fighter statue – a memorial to honor those who stood up for sovereignty no different than what we see going on in Ukraine today.

The Hungarian Freedom Fighter stands as a powerful symbol of freedom and bravery in the ongoing battle against communism and Soviet tyranny. She is the first of her kind in the capital of the South, home to the most famous freedom fighter of our time, Martin Luther King, Jr. In fact, Athens-based sculptor Stan Mullins is the artistic vision behind both the Freedom Fighter and a new MLK statue coming to the park this winter.

The statue marks the 66th anniversary of the Hungarian Revolution of 1956. It was a modern-day David vs Goliath story. Hungarians longed to be free and risked their lives by starting a Revolution. Beginning Oct. 23, 1956, students armed with homemade Molotov cocktails battled the mighty Soviet Union when no one else in the world dared to challenge them. Thousands lost their lives or were imprisoned and 200,000 fled when the Soviet Union crushed the uprising. 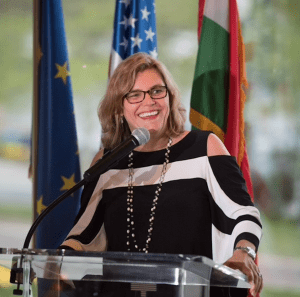 Andrea Lauer Rice, a Roswell resident, is President of the Hungarian American Coalition. She is also founder of the Atlanta Hungarian Festival.

How hauntingly similar are the scenes we see today — as the war in Ukraine rages on and as individuals across the globe continue to fight for their freedom – from Hong Kong to North Korea, from Russia to Cuba and beyond.  At Millennium Gate Park, the statue depicts a young woman, wrapped in a flag, ready to fight unbeatable odds. She personifies all human beings’ unquenchable desire to be free.

My Mother was a freedom fighter – at the age of 14, she helped build cobblestone barricades. My grandmother cared for wounded freedom fighters in the back of the neighborhood pharmacy. My aunt filled bottles by siphoning alcohol for Molotov cocktails. My grandfather organized the Revolutionary Committee at the Hungarian National Bank. They are the inspiration for this statue.

The statues’ supporters include many inspirational stories: from Imre Latkoczy, who trained young freedom fighters how to use their weapons and was tragically killed by Soviet troops in 1956 to Jozsef Adorjan, who escaped years of false imprisonment in 1956 and became part of the newly formed government to the Ertavys, who, during the Revolution printed pamphlets demanding freedom and drove ambulances and tended to the wounded. They later founded the first Hungarian organization in Atlanta in the early 1970s.

They are the stories of Hungarians who were part of the Revolution, then made the momentous decision to leave their homeland. Many of them had a tremendous impact on the United States such as such as Andrew Grove and Les Vadasz who confounded Intel, forever changing Silicon Valley; Steven Udvar-Hazy who founded AirLease; Adrienne Vittadini, who entered the fashion world; Andy Vajna and Istvan Szabo who brought original footage of scenes of the Revolution, then made their mark in Hollywood; or Lee Edwards, a young American college student who marched with French students in Paris and 70 years later founded the Museum of the Victims of Communism in Washington, D.C.

The Freedom Fighter statue is one of 10 statues or 20 memorials dedicated to 1956 across America. It is carved with granite from Elberton, Ga., weighs 15 tons, towers 13 feet and was paid for largely with donations from Hungarian Americans across the United States.

In this day and age, this statue is quite a statement we are making together. Just as we hear about other statues being torn down, we are raising one to freedom. And while this statue may be dedicated to Hungarians and located in Georgia, it carries a universal message for all of us – a message of freedom and hope.