The Metro area is notorious for traffic jams and excessively long commutes. Besides frustration, that also creates a slew of other issues, like Fulton County’s “F” grade in ozone pollution. 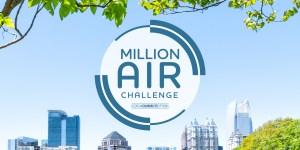 “Whether it’s a commute or replacing a trip to the store with a bike ride, you can make kind of any small change in your travel routine to participate,” GCO Marketing Manager Joel Wascher said.

To help combat poor air quality and health issues that generally come with car-dominant cities, Georgia Commute Options (GCO) is challenging residents to join their second annual Million Air Challenge. From now until Aug. 28, residents are encouraged to collectively remove one million pounds of pollution by keeping their cars in the driveway and finding other ways to get around town.

GCO — managed by the Atlanta Regional Commission on behalf of GDOT — offers services and incentives to reduce the number of single-person cars on metro Atlanta’s roads.

The program was created last year in hopes of building upon the already-lowered emission levels from the beginning of the pandemic. Metro Atlantans collectively avoided 978,000 pounds of vehicle emissions during the 2021 challenge, just shy of the goal. This year, the team hopes to reach that million-pound mark, but GCO Marketing Manager Joel Wascher noted that the number isn’t the most important part of the initiative.

“The goal of the promotion is to show the value of collective impact,” Wascher said. “Making small individual choices, while not doing a ton on their own, can add up to something significant — like a million pounds of pollution reduction.”

He continued: “The pandemic changed the way people think about everything, and transportation was one of those things. We saw significant air quality impacts from [the lockdown in 2020] and as people returned to work, we wanted them to think about the choices they make when getting to work.”

To participate in the challenge, folks can record their eco-friendly commutes, with a live tally displayed on the GCO website. Instead of hopping behind the steering wheel, Wascher recommends biking, walking, e-scooters, rideshares and local transit, like MARTA. Those who work from home, thus avoiding a commute, can also log their telework.

Those who sign up have the chance to win a $500 gift card to Big Peach Running Company or a one-year Family Membership to the Atlanta Botanical Garden.

There are also mode-specific prizes, encouraging folks to try something different. For example, a wearable chain lock for bicyclists or a desk footrest for those who work from home.

“What we’ve found, even beyond just this promotion, is once people try something [different], they’re much more likely to incorporate that as a longer-term habit,” Wascher said. “Our goal is to encourage people to give those behaviors a try, with the goal that they’ll choose to incorporate that in the long term.”

There’s a little over a week left in the challenge, so whether you regularly commute clean or are looking to try a more eco-friendly alternative to cars, be sure to log your trips.