Minus the South: Donald Trump and the Old Union 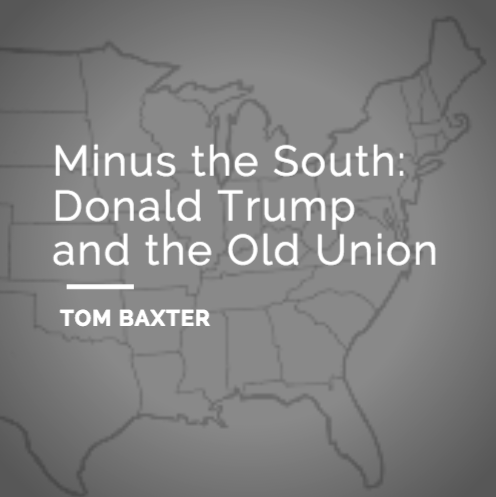 First the great de-flagging, then Atticus Finch. This roiling summer of 2015 has been enough to incite a rash of unflattering reflections on the South, and southernness, updated with the perspective of a young century but rife with criticisms which stretch back to the British Isles.

Without the South, the rest of the country would be less violent, more socially mobile and generally more “normal,” author Michael Lind argues in a widely-read recent essay in Politico.

These are not new charges. Grady McWhiney’s classic “Cracker Culture: Celtic Ways in the Old South,” is replete with accounts of northern visitors to the south, and English visitors to Scotland and Ireland, making similar observations back to the 17th Century. It’s what Lind has to say about the rest of the country that constitutes a huge misreading.

“Minus the South, the rest of the U.S. probably would be more like Canada or Australia or Britain or New Zealand—more secular, more socially liberal, more moderate in the tone of its politics and somewhat more generous in social policy,” Lind writes. “And it would not be as centralized as France or as social democratic as Sweden.”

There’s a lot to say about this assertion, but there are two words which answer it perfectly: “Donald Trump.”

It’s a political error of huge proportions to assume that Sam Brownback’s Kansas or Paul LePage’s Maine would be “more secular, more socially liberal, more moderate in the tone of its politics,” if only these states weren’t saddled with Georgia and Alabama. The conservative uprisings in these states are deeply rooted in their own political cultures, and have nothing to do with the Confederate battle flag. Nor does the nativism which Trump has so enthusiastically exploited belong to any particular geographical location.

James Carville has said, more than once, that if you take Philadelphia and Pittsburgh out of Pennsylvania, what’s left is Alabama. This rings much more true than the idea of New Zealand in rural Idaho or suburban Chicago.

Although the dramatic aftermath of the shootings in Charleston has trained a lot of attention on the Old Confederacy, the more interesting region of the country, from a political perspective, is what you might call the Old Union: those counties, stretching from Maine to Kansas, mostly outside the urban growth centers of the North, which have long traditions of social conservatism and Republican loyalty rooted in the Civil War. Just as the South and the Sunbelt share a lot of territory, so do the Old Union and the Rust Belt, but in both cases they aren’t exactly the same.

It’s in this Old Union territory where Republican politics has taken many of its sharpest turns to the right in the past few election cycles. This should be Scott Walker territory in the upcoming primaries, but there are a half-dozen candidates — including Trump — who could compete in the Old Union.

As politics in the Old Union has become more strident, it has occasionally caught the harsh media glare that in earlier days was focused on the South. Compare, for example, the way Indiana Gov. Mike Pence misplayed a losing hand in the battle over a “religious freedom” bill earlier this year, with South Carolina Gov. Nikki Haley’s adroit handling of the flag controversy in her state.

Pence was slow to recognize the way the bill would affect business in his state, and didn’t want to offend his base of social conservatives by backing off the measure.

Haley relies on a social conservative base as well, but as the behind-the-scenes accounts of her successful competition with Gov. Nathan Deal to win Volvo’s first U.S. plant demonstrate, Haley is never slow about business. She and Alabama Gov. Robert Bentley both lost no time in removing the Confederate battle flag from the official premises when they had the political cover to do so.

There was more pragmatism involved in these decisions than some of the adoring media coverage of Haley’s leadership, in particular, would lead you to believe. But the point is that the governors of Alabama and South Carolina felt they had more flexibility on what has been an extremely hot issue than the governor of Indiana did on the issue of gay marriage.