Mitchell Anderson’s method of success: From actor to chef to actor

Last fall, Mitchell Anderson decided to revive his acting career in “Next Fall,” now playing at Actor’s Express at the King Plow Arts Center on Atlanta’s west side. On the outside, there was no need for him to prove anything, not after a successful TV and movie resume – you may have seen him in the series “Party of Five” or “Doogie Howser M.D.”, or as Richard Carpenter in “The Karen Carpenter Story,” or as the kid who got eaten by a shark in “Jaws.”

Anderson had left Hollywood to settle into a new life in Atlanta, which led to an apprenticeship in the kitchen of Jenny “Souper Jenny” Levison, and opening his own restaurant, MetroFresh in Midtown, and a spin-off bistro at the Atlanta Botanical Garden called MetroFresh in the Garden.

At 50, his culinary stage kept him plenty busy – but what pulled him back to acting was what he loved about cooking, too: friendships and a unique, exquisite creation. 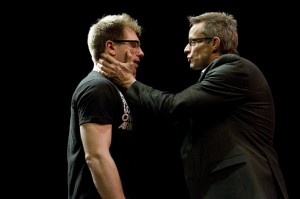 “It’s a bit like finding a suit in your closet that you haven’t worn for a long time, and it fits nicely,” Anderson said of his turn as Adam, half of a couple who look for answers in the wake of tragedy.

“And you think to yourself, ‘I like that. Why don’t I wear it more often?’ This play has been really great and thrilling, and like the best theatre, it makes you laugh and cry and think.”

Not long after the opening of the show (which runs through Feb. 11; tickets www.actorsexpress.com; 404-607-7469), Anderson talked about his method of reinventing himself, and advice for others who want the next stage of life to be their best yet.

MA: This play was written by my friend, Geoffrey Nauffts. We started acting the same time, in the mid-80s – he went to NYU drama school and I went to Julliard. We are both theatre-based actors. I moved to L.A. and started in TV in 1985, but we were in the same circle of friends and had similar career paths, though he was more connected to New York.

He told me when it was on Broadway that if the play ever came to Atlanta, I should do it. I saw the flyer for the season at Actor’s Express, so I called and talked to artistic director Freddie Ashley,  and thought this could work out with the place where I am business-wise.

I knew it would be the right role for me, and the play’s director, Kate Warner, thought so too.

MA: No – my milestone really was in my late 30s. I was working and making a living as an actor, but not getting the kind of work I thought I should be doing.  I was a journeyman and could have easily continued in show business. But I did not want to be 50 and still be auditioning, especially for an episode of some TV show I didn’t even like. I had had a great career, and I wanted to go out while I was still passionate.

Q: How did you end up in Atlanta?

MA: I met my partner, Richie Arpino, while I was acting, and we were traveling between Atlanta and L.A., and at a certain point, we needed to move out. That was 2002. A lot of people get frustrated with show business like I did, but still live in L.A., because it is hard to break away from it.

MA: I continued acting with theatres and some TV, but there wasn’t the film business in Georgia that we have here now. I had an agent sending me to Coke industrials. Are you kidding me? That’s not what I wanted to do. … I thought I might go into politics because I had done so much work in political fundraising, AIDS and HIV issues in L.A., but that didn’t happen. 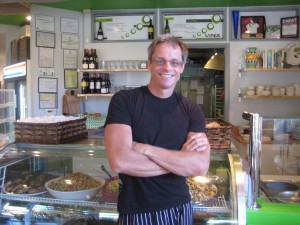 Q: How did cooking come into your life as a follow-up career?

MA: I have always loved food. I like the communication that happens around food – telling stories, making me think, inciting good conversation – that’s what I like about acting as well.

Richie introduced me to Jenny Levison, and we knew it was sort of awkward, but asked if she would be interested or able to take me into the kitchen and apprentice with her. She taught me her approach to food and the business, and while she was adopting a baby, I was able to run her business. After about 2 ½ years, she said, “I think you are ready to open your own restaurant.” She nudged me to open MetroFresh in 2005, and it’s been so awesome.

Q: What did you carry over from acting to cooking?

MA: I call it improv cooking. Jenny taught me that there are no rules. If we can think it up, we can make it.

As an actor, once you have all the tools in your toolbox – once I knew how to take the stage, how to project and open myself up to the audience, all that technical stuff – the rest is innate and nuance. It’s the same in the kitchen: if I just put a little maple syrup in there, that’s going to be awesome.

You also can have the same ingredients – such as Brussels sprouts and red pears – that you have to put together each time, and it’s always a little different and exciting in a new way. It’s like every audience is different, and they’ll hear a line one way one night, and different the next.

There is a right way of learning both businesses, and people don’t necessarily want to put the time into that. Learning a new craft means working for nothing and then for a little bit of money until you learn to be successful.

Q: How did you juggle restaurant duties with rehearsals?

MA: We had opened MetroFresh in the Garden at the Botanical Garden in March, and no one knew what would happen when the holiday light show was introduced. It was a huge hit. Smack dab in the middle of all that, I was starting rehearsal on Dec. 19.

It was kind of my savior, even when I was going 6 am to 10:30 pm, to have that thing that was not MetroFresh-related. The play came at the right time where I needed to focus on something else.

MA: I know Geoff so well that I can hear his voice. Adam really is Geoff. The way he talks is more like him, and because I hear his voice so well, it fits well. It was, in an odd way, easy to learn the script.  The character is a terrible hypochondriac and I am not the least bit that way. A lot of that is for comic effect. The play questions faith and trust and all that, and Adam is a lot more self- conscious than I am.

Q: What role did food play in your career as an actor?

MA: I grew up in upstate New York, in the country, so we were really influenced by farm food. My grandfather pulled beets, washed them, put them in boiling water and then we ate them.

So when I was living in L.A. as an actor, fortunately I always worked, so I didn’t eat ramen noodles out of the box. I was the one who had the dinner parties, who said, ‘Hey I am making some Bolognese tonight – come over.” I had a group of friends over pretty much over once a week, did Thanksgiving and Christmas dinner, and we’d sit down, have a bottle of wine and talk. This was 20 years ago before people carried around cell phones, and it seems like the olden days, and that’s what I still like today.

When my brothers and sisters and I get together — there are six of us — that’s what we do: cook great meals. My sister visited when the play opened and cooked an awesome dinner for me.

Q: What did she make?

MA: An awesome chicken that you put in a steel pot with pizza crust, and in the bottom you put herbs and chamomile tea. The chicken steams in the pot, and she served it over shaved brussels sprouts and sautéed mushrooms in some veal stock. We ate after the matinee, while we watched the Golden Globes.

Q: What cooks influence you?

MA: Any that builds flavor profiles that are really distinct. I like clean flavors and fresh ingredients. Ford Fry and Shaun Doty are two I like, locally.

Q: What actors influence you?

MA: Derek Jacoby, Ian McKellen, Meryl Streep. I like people who have a lot of training, but you can’t see it working. The people who really move me as actors are trained as theatre actors, then take a couple of years to lose it, but you know it’s there. I see young actors who are tied to the vocabulary of their acting class, because they haven’t learned to trust that their technique is there, and they need to stay as real as possible. 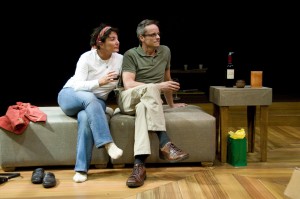 Actors/chefs Jennifer Levison (Holly) and Mitchell Anderson (Adam) in "Next Fall" at Actor's Express, now through February 11. Levison is the founder of Souper Jenny in Buckhead, and Anderson, her protege, created the Midtown cafe Metrofresh. (Credit: Offhand Photography)

Q: What is it like sharing the “Next Fall” stage with your chef mentor, Souper Jenny, who plays Holly?

MA: She plays my best friend, and she says my favorite line in the play: “Remember when you first came to work for me at the shop and we used to hang out together.” It’s my favorite line because it’s so true. We joke that our businesses are twice as big now, and as they grow, so do the challenges. On those days when it’s challenging, we tell each other, “I want to go to work with you again!”

Q: What advice do you have for others about reinventing one’s self and career?

MA: I picked two of the most ridiculous careers. To be an actor for 20 years, I was lucky that I was a kid who was really driven. I never had any fear. The second time around, I picked the thing that turned out to be a perfect fit, because I am a really good cook and I like creating in the kitchen.

You have to be able to jump in and find that out for yourself, even if you have done one thing for 25 years.

Previous Article
Welcome to Design with Perkins+Will
Next Article
Ryan Gravel’s Moment wasn’t conceiving the BeltLine, it was when others embraced it