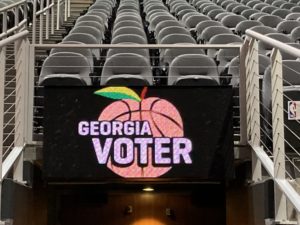 More than 1.8 million ballots have been cast in Georgia’s Senate runoff races during early voting.

More than 1.8 million ballots have been cast in Georgia’s Senate runoff races during early voting, according to online data tracker GeorgiaVotes.com. At this point during the general election, more than 2 million people had cast ballots.

Right now, the total turnout for the 2020 runoff is six percent lower than that of the general election. However, it could still outpace turnout by the end of the early voting period. More than 1.2 million voted in person of the ballots cast.

Enthusiasm around the Senate races has built up over the past month as Joe Biden won Georgia’s electoral votes in the general election, flipping the state from red to blue. But some experts feel that excitement could wane as competitors face a lull in enthusiasm with the holiday season.

Precincts are expected to close for the Christmas holiday, taking away a day of voting for the state. Residents can visit their respective county election registrar’s office for more information on early voting.