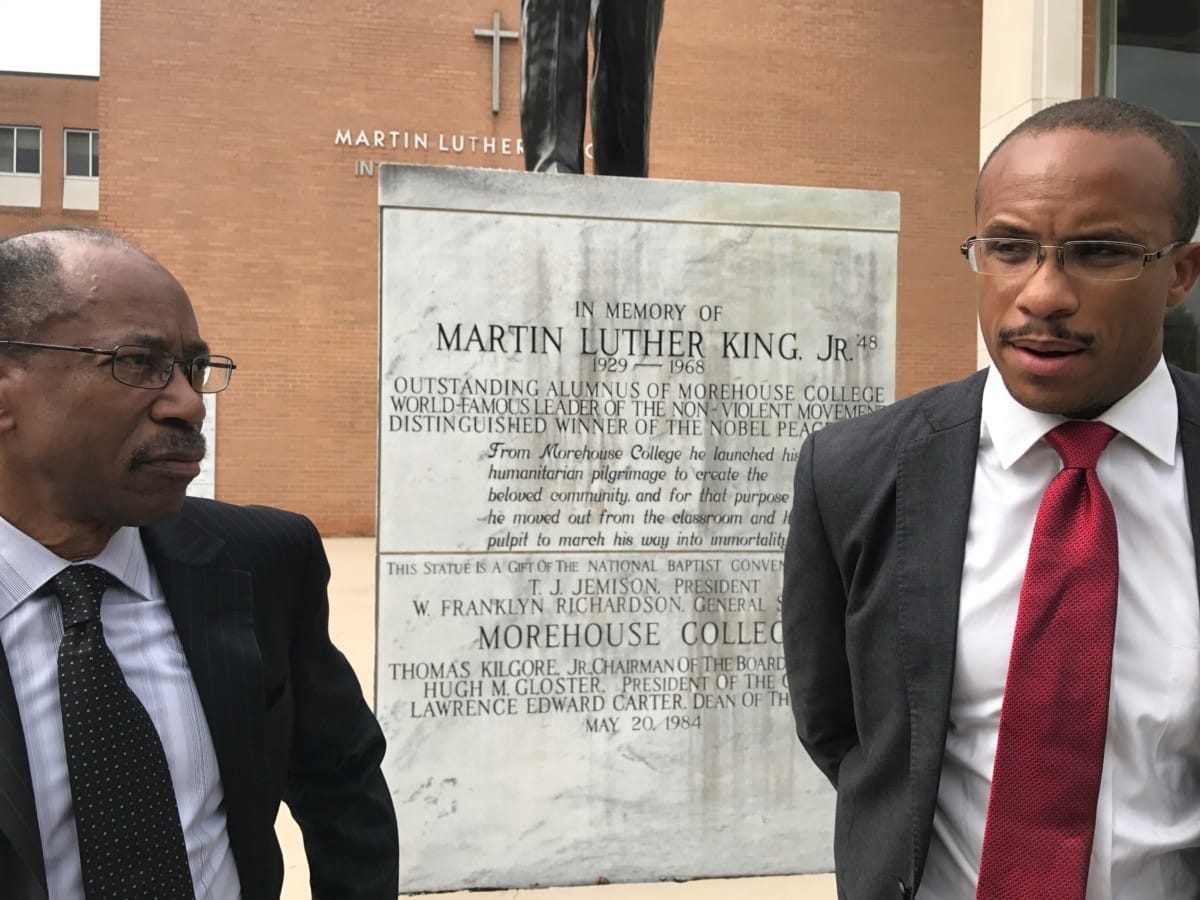 Ron Thomas, director of Morehouse College’s Journalism and Sports Program since 2007; and Harold Martin, secretary of the Morehouse College board 2002 alum speak to the press before the service( Photo by Maria Saporta)

The board of trustees of Morehouse College Monday voted unanimously Monday to name Harold Martin Jr. as the interim president of the institution.

Martin, who has been serving as secretary of the board, follows the sudden death of former interim President William J. “Bill” Taggart on June 7. 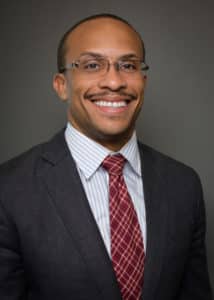 “The Morehouse College search committee has received many inquiries regarding the permanent president’s position and is working diligently to identify a candidate as the process moves forward,” said Dale Jones, chairman of the search committee, in a statement released late Monday afternoon.

Martin will take on the day-to-day leadership responsibilities for the College until a new president is identified and hired.

“While these circumstances are certainly unprecedented, I am honored to step into the role of interim president of Morehouse College,” Martin said in the press release. “Over the past few months, the College has made great strides under the leadership of Bill Taggart; it’s amazing how much he was able to accomplish in such a short amount of time.”

Willie Woods, chairman of the Morehouse College board said: “In selecting a new interim president, the board’s primary objective was to maintain the strong momentum achieved under Bill Taggart. We selected a leader familiar with his work who would offer very little disruption to the staff. Today, the board could not have made a better selection. Harold will be a stabilizing force and will continue to move Morehouse forward as we finalize our search for a permanent president.” 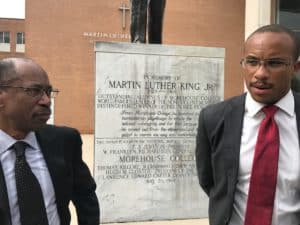 Ron Thomas, director of Morehouse College’s Journalism and Sports Program since 2007; and Harold Martin, secretary of the Morehouse College board 2002 alum speak to the press before the service( Photo by Maria Saporta)

Martin said he was able to work with Taggart during his 60 days as interim president and for the past two years when Taggart served as the chief operating officer for Morehouse.

“During this time, I worked closely with Bill to support his vision and his primary goals and objectives,” Martin said. “I will continue to execute on this plan in the days and weeks ahead and look forward to working with Morehouse’s Board, students, parents, faculty, staff, alumni and donors to solidify Morehouse’s position as an academic leader during this pivotal time in our College’s history.”

During the recent June 16th memorial service for Taggart, Martin was one of the Morehouse officials who met to speak to members of the press.

At the time, the College named Provost Michael Hodge as acting president. Hodge will step down from that role because of Martin’s appointment. Also, Martin has resigned from the board of trustees while he serves as interim president.

“Harold has been a tremendous asset to the board, and he has a strong fundamental understanding of higher education governance and operations, as well as the necessary leadership skills to chart a successful path forward,” said Dorothy Cowser Yancy, a long-time board member and former president of Shaw College and Johnson C. Smith University, in a statement.

Yancy was appointed by the board to serve as a senior advisor to Martin. She will focus on supporting the College’s preparation for the upcoming SACSCOC accreditation process. 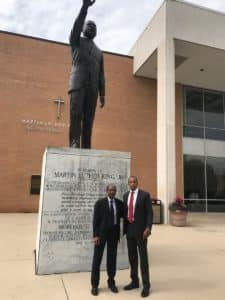 Ron Thomas, director of Morehouse College’s Journalism and Sports Program since 2007; and Harold Martin, secretary of the Morehouse College board 2002 alum speak to the press before the service. They are standing in front of the Martin Luther King Jr. statue on the Morehouse campus. (Photo by Maria Saporta)

“Harold Martin Jr. brings experience, character and leadership to the role as Interim President,” said Dr. Robert Franklin, president emeritus of Morehouse College. “Harold and I worked closely during my tenure as president, and I have the utmost confidence in his ability to guide the future direction of Morehouse College. I look forward to watching him follow in my footsteps, along with others who have stood before him, to continue building a strong academic institution.”

In his post-collegiate years, Martin has been an active member of the Morehouse community through his involvement on the board. After leading a pro bono consulting project to develop the College’s strategic plan in 2011, he was invited to join the board in 2014.

Since then, he has served as a member of the Finance and the Trusteeship and Governance Committees, as well as multiple ad hoc committees. Most recently, in April 2017, Martin was elected board secretary.

Outside of Morehouse College, Martin is a business leader with extensive experience advising senior executives at institutions of higher education and at Fortune 500 companies.

Since leaving McKinsey, Martin has built a successful independent consulting practice and private investment firm in Atlanta, where he currently lives with his wife and children. 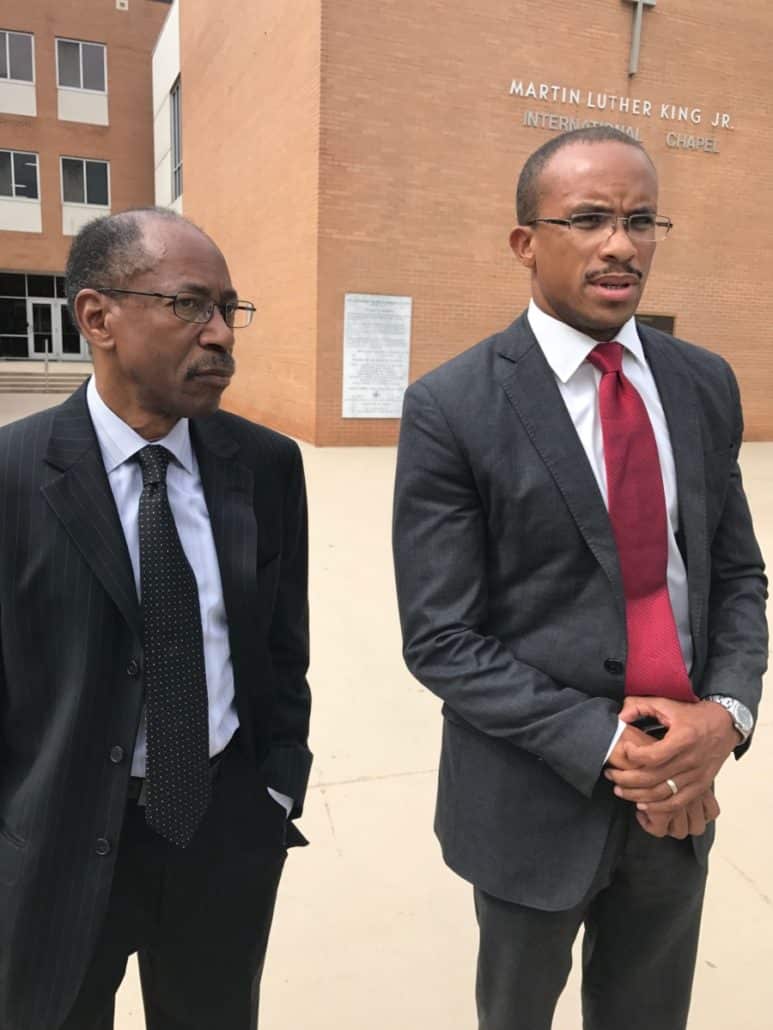 Ron Thomas, director of Morehouse College’s Journalism and Sports Program since 2007; and Harold Martin, secretary of the Morehouse College board 2002 alum speak to the press before the service.

Previous Article
Does the future look like the Better Care Reconciliation Act, or the Healthy California Act?
Next Article
When it comes to our national ParkScore, Atlanta has room to improve