Morehouse President John Wilson’s future in question as board meets 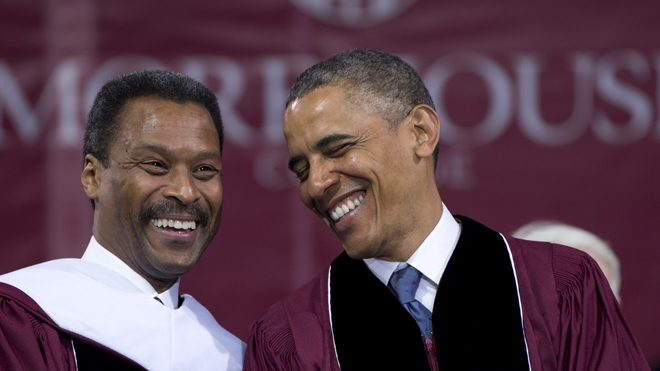 The fate of Morehouse College President John Silvanus Wilson hangs in the balance as the institution’s board of trustees is meeting during the weekend honoring the birth of Martin Luther King Jr., a Morehouse Man.

Student representatives, however, were protesting the board meeting – saying they were being shut out of the discussions. The students held protests on Friday and Saturday, and they also sent out a petition through Change.org.

The students’ petition, released on Thursday, is printed in full at the end of this story.

There also are numerous posts on twitter using the handle #AHouseDivided. 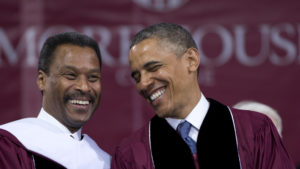 Wilson, a Morehouse alum, has been president of Morehouse College for exactly three years. His tenure has been marked with highs and lows for the prestigious historically-black male college that has educated some of the greatest leaders in Atlanta. In addition to King, Atlanta’s first African-American Mayor – Maynard Jackson – was a Morehouse Man.

On Friday evening, during a program at the Center for Civil and Human Rights, Wilson was on a panel on “Morehouse College and the Making of a Man” about Martin Luther King Jr.

Wilson said that when King entered Morehouse at the age of 15, he was only reading on an 8th grade level. When he graduated in 1948, he was prepared to go get a Master’s and PhD.

As Wilson explained, that’s what Morehouse does – it transforms its students.

King’s mentor at Morehouse was then College President Benjamin E. Mays, who inspired King and thousands of students to advocate for changing the segregated South.

“Dr. Wilson hit the nail on the head when he talked about transformation,” said Fulton County Commission Chairman John Eaves, a fellow panelist who graduated from Morehouse in 1984. 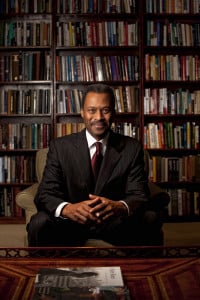 Wilson used the panel discussion to emphasize the qualities of a Morehouse Man – someone who is willing to protest the status quo and to speak up for their beliefs.

After the poignant discussion, Wilson explained he had to hurry back to rejoin the board of trustees – without elaborating on his own future.

Wilson’s tenure began with a great deal of hope for Morehouse College, which was on shaky financial ground.

A highpoint during his tenure came a few months later in May 2013 when President Barack Obama gave the commencement address and was made an honorary Morehouse Man.

But Wilson’s tenure also has been marked with differences of opinion and personaliity conflicts.

The national magazine Rolling Out summarized his situation in an article on Oct. 15, when it was understood that Wilson had received a one-year extension on his contract.

Rolling Out said: “College President John S. Wilson has been credited with reviving and renewing the brand of the prestigious HBCU. But it has not been an easy journey from being a White House advisor to President Barack Obama to leading the nation’s premier college of choice for young Black men.

“Wilson has had to deal with funding issues, infrastructure repair, labor disputes and a NCAA violation. Despite these problems, he has been able to put Morehouse College on a more stable footing. One of his crowning accomplishments was landing President Obama as a commencement speaker and awarding him an honorary degree.” 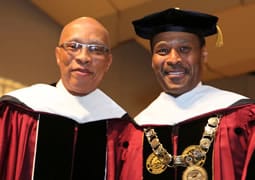 Repeated requests to Morehouse officials as well as board members were not returned on Saturday afternoon.

SaportaReport will keep you updated with any news from Morehouse College regarding Wilson’s fate.

Meanwhile, here is the petition from Morehouse student representatives:

Beginning tomorrow afternoon, Morehouse College’s Board of Trustees will meet regarding the renewal of President Wilson’s contract agreement. Representing the student body, we act as your Student Trustees. We hold the responsibility of representing and reporting, if any, the concerns that you all may have in this decision.

Made clear via an email from the Chairman of the Board, we hate to inform you that the Board of Trustees have excluded the Student Trustees, along with the faculty Trustees. Which in turn eliminates two very important stakeholders of the Morehouse community. As is states in section 2.5 of the Amended and Reinstated By-Laws, last updated in January of 2013:

Students are bound by the confidentiality and conflict of interest guidelines that apply to Elected Trustees and should declare any conflicts and excuse themselves from discussions that may lead to a conflict of interest. Student Trustees should excuse themselves from participation and voting on matters relating to the appointment, promotion, tenure and dismissal of faculty members.”

Whether you are in support of president Wilson’s leadership or not, our [Student Trustee’s] obligation is to advocate and protect the best interests of our students. We will not remain silent about this matter.

On the eve of the college’s 150th anniversary, this comes at a critical time considering it effects the stability of our institution, long and short term. By spreading the word, you make it clear that you’re in support of our decision. But you can do more than spread the word by emailing all your comments and concerns to StudentTrustees@morehouse.edu.