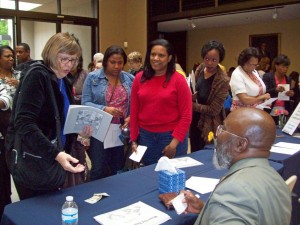 Sarah Jackson (in red) attended the Family History Conference at the Atlanta History Center on Saturday.

Sarah Jackson does not remember her first visit to Salt Lake City fondly.

She recalled how in 1977 the charter bus carrying her basketball team pulled beside the Mormon Temple and her coach told her black people weren’t allowed inside. At dinner at a popular restaurant, Jackson remembered getting sent through the kitchen and into a rear dining room.

The feeling of being stared and standing out in a crowd, while not unfamiliar, was more intense and disturbing than she had ever experienced.

“I vowed after leaving college I would never go back to Utah,” she said, and apart from one more basketball game, she kept her word.

On May 18, Jackson, drove 22 miles from her Duluth home to seek help from the people who represent the faith that once shunned her. At the Atlanta History Center, she sought out Mormon genealogical experts to discover more about her own lineage. 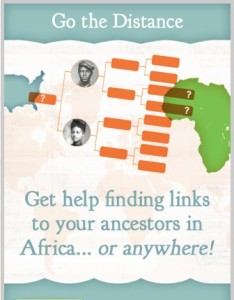 The conference featured seminars on using indexing and the “genealogical proof standard” in doing ancestral research.

Throughout much of the church’s history, Mormons considered African-Americans inferior to whites. In the mid-19th century Mormon leader Brigham Young said black people were marked by the “Curse of Cain.” It wasn’t until 1978—the year after Jackson’s visit—that the church reversed bans on African-Americans taking part in temple ceremonies and black men entering the Mormon priesthood.

But the fallout from that historical antipathy remains. In 2012 presidential election, Republican Mitt Romney, a white Mormon, failed to capitalize on black voter discontent with a fledgling economy. He garnered a mere single-digit share of the African-American vote against Barack Obama, the nation’s first black president.

Genealogy creates a confluence for the two historically disparate groups. Mormons have a hieratic obsession with ancestral research born out of the church’s teachings and religious ceremonies, intended to bind families together for eternity. This drive has led the church to establish one of the world’s largest systems for collecting genealogical records.

Saturday’s Family History Conference was sponsored by 13 businesses and organizations, including the Atlanta Stake of the Church of Jesus Christ of Latter Day Saints; Family Search, the church’s own non-profit genealogical research service; and Ancestry.com, a Provo, Utah-based for-profit company founded and run by Mormons.

African-Americans who seek their lineages face distinct challenges. These sleuths, because of slavery, often must find ancestors without surnames belonging to families ripped apart by auctions. Records are often scattered with few easy-to-find links. The interest in this work swelled after the publication of “Roots,” by Alex Haley in 1976 and continues through current media such as “Finding Your Roots,” the PBS series starring historian Henry Louis Gates. 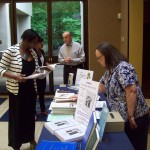 “I am tremendously appreciative of what they [Mormon genealogists] have done,” said Rhonda Barrow, who has researched her African-American ancestors and Caribbean roots. “Without them I would not know what I know about my family.”

Barrow, who is not Mormon, said the day she walked into a Family History Center in 1996, she found records of two ancestors. Since then she has found multiple documents related to her people in Barbados, St. Martins and Guyana dating back to 1820.

“What they (the Mormons) have done for genealogy is extraordinary,” said Barrow, volunteer public relations chairperson for the metro Atlanta chapter of the Afro-American Historical and Genealogy Society. “I can’t afford to pay for these searches of information and they make it so you don’t have to.

A FamilySearch seminar Saturday focused on how to use the “genealogical proof standard,” the minimum steps to conduct credible ancestral research, on African-American families.

The speaker, FamilySearch manager James Ison, presented a case study on the identity of John Percival Parker’s father. Parker was an abolitionist, inventor and former slave who helped rescue more than 1,000 other slaves through the underground resistance movement. 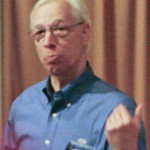 James Ison of FamilySearch leads a seminar on using the “genealogical proof standard” to research the parentage of African American slaves.

Parker’s mother was a slave. His father was white.

The search for the father initially zeroed in on a slave owner, also named Parker, who, according to his will, fathered a son through a slave. Census records suggested the boy had been born the same year as John Percival Parker. However, Ison presented a counter theory that the two were not connected, and Parker had merely chosen to name himself after an abolitionist politician.

Afterwards, Ison said it was not unusual for Mormons to aid African-Americans’ genealogical research.

“We help every ethnicity in the world,” he said. “Everyone shares a love of family … Families are eternal.”

He acknowledged the difficulties in researching African-American lineages.

“Before Emancipation, enslaved people had only one name in records. It was John or Bill,” Ison said. “Before 1865, we might have been brothers who got sold to different owners. After 1865, I might have taken the name Ison and you Smith and we might have lived 100 miles away from each other and never known where the other was.”

But that’s no reason to give up, Ison said.

“You need to persevere and find people in genealogical societies who can help you and find people doing similar research in some of the same places where you are doing research,” said Ison. “Learn from others who have been successful.”

His words hit home with Jackson.

“That’s the reality for us. That’s the way it is, nine times out of ten you don’t find anything but you get close,” she said. “But you learn to celebrate the small things until you get that big break.”

A decade ago, Jackson said she made a completely unexpected discovery through Ancestry.com—about her current family. Race and ethnicity aside, this news was a bombshell, and she doubts she would have found it elsewhere.

“I found out I had a brother and sister,” she said. “My dad and mom and never told me he had been married before He carried their photograph along with ours. He did support them.”

For more information on FamilySearch, a free service for all family genealogists, contact https://familysearch.org/