One down. One more to go.

After meeting privately for more 90 minutes Thursday night, the congregation of Mount Vernon Baptist Church voted 116 to 16 to accept the $14.5 million offer from the City of Atlanta, the Georgia World Congress Center Authority and the Atlanta Falcons organization.

Mount Vernon’s positive vote is one of two church votes needed to make way  for the new $1 billion Atlanta Falcons stadium to be located on the site south of the Georgia Dome.

The congregation of the other church — Friendship Baptist Church — is scheduled to vote on its $19.5 million offer on Sunday. 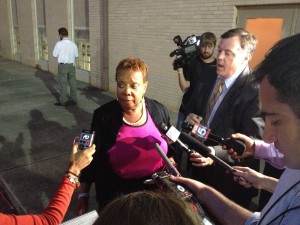 Vickie G. Johnson was one of 16 members to vote against the sale of Mount Vernon for the stadium

The parking lot at Mount Vernon was full Thursday as more than a dozen journalists waited for the meeting to be over. The security guard told the journalists that they had to wait on the steps about 50 yards away from the entrance where people were meeting.

Vickie G. Johnson, one of the church members who voted against the offer, was the first to inform the press about the vote. She said she was against the city removing two black churches for a football stadium.

“I think it’s appalling for this city to consider desecrating the sacred grounds of two historic black churches for a second-rate football team,” said Johnson, who was upset that her sick mother was not able come to the church to cast a vote against the sale. “I’m very emotional about this. My mother was denied the opportunity to vote.”

The mood of other members pouring of the church, however, was much more upbeat.

After the meeting, an associate pastor of the church — Rev. Eddie Turner (no relation to the senior pastor) — said the meeting was  “cordial” and “peaceful.” 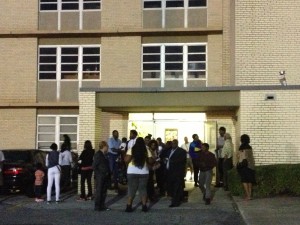 Although the church building has been at the corner of Martin Luther King Jr. Drive and Northside Drive for decades, Turner said the church is not a building; it’s the body of believers.

After most of the members of the congregation had left, senior pastor, Rev. Rodney K. Turner, emerged from a separate exit where he stopped to talk to reporters.

“Tonight our church did accept the offer given to us from the city and the Georgia World Congress Center Authority,” he said. “There’s still a lot to be done, but we are excited about what has happened.”

Turner also said he had spoken with Mayor Reed and informed him of the affirmative vote. 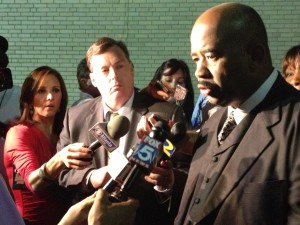 Rev. Rodney Turner talks to reporters after the vote

“Even though it was not a unanimous decision, our church was still unified,” Rev. Turner said, adding that it is still a sensitive time for many of the members who are attached to the history of Mount Vernon. “Our church is 98 years old. She’s been working in this community for a long time.”

Turner will celebrate his 10th pastoral anniversary with Mount Vernon on Sunday, which he said “certainly seems to be divinely ordered” to coincide with Thursday’s vote.

He thanked all the people who have been praying for Mount Vernon throughout the process, and he said there was still much more work to be done.

“Our church body, we’ve been praying from the beginning,” Turner said. “We went into this with a spiritual mind.”

When asked about the next step, Turner said the church will begin exploring its options to rebuild. He said Mims Park is a possibility, but whatever happens, he said the church would stay in the Vine City and English Avenue communities. “This is where the help is needed,” Turner said.

If the congregation of Friendship Baptist Church approves its offer on Sunday, the two major obstacles to building the stadium on the south site will have been removed. The state would still have to acquire six small parcels, but it would be able to use the power of eminent domain.

The Atlanta Falcons likely would announce that the final location would be the preferred south site, which is between two MARTA stations and is next to the GWCC convention center.

The new stadium is scheduled to open in 2017.