“No pictures,” artist Gregory Warmack told us when we stepped inside his cramped, one-story home in northwest Atlanta last fall. 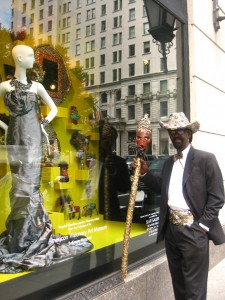 Mr. Imagination in front of the Bergdorf Goodman windows in New York City in 2009, which featured him and other artists whose work is in the American Visionary Arts Museum in Baltimore.

That directive felt like when visitors are told to take off their shoes or cover their heads when entering an unfamiliar house of worship.

The home of Warmack, better known in modern art circles as “Mr. Imagination,” was indeed a portal to a spiritual realm. We didn’t expect an airy studio and someone dressed all in black.  As a self-taught “visionary” artist, Mr. Imagination sculpted his own organic world where even circadian rhythms bowed.

In thick borders around each room and hallway, his layered, meticulously encrusted creations resembled masks, animals and common items like musical instruments. What he made them out of – bottle caps mostly, but also paintbrushes and other scraps – inspired me to think of him as “Mr. Re-Imagination.” 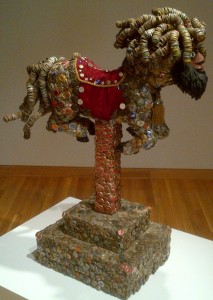 With a collection of things that had already lived once as common objects, he had wired, hammered, plastered and placed them into an extraordinary new life. A few miles from the headquarters of the world’s most iconic brand – Coca-Cola – Warmack had compelled leading museums to carve out space for the lowly bottle cap.

He had done that with himself, too. After a 2009 fire destroyed his house in Pennsylvania and much of his art, he started anew in Atlanta.

His work, which appears in permanent collections including the High Museum of Art in Atlanta and the Smithsonian, was so vibrant and prolific that there seemed no end to it. But last week, that end came suddenly when Warmack, 64, died in hospice of complications from a blood infection. 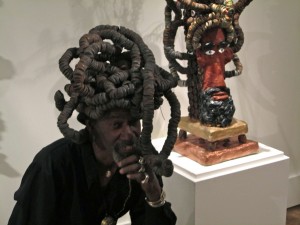 Gregory Warnack, a.k.a. "Mr. Imagination," poses with one of his creations. (Terry Stevick)

“I don’t sleep much,” he said on our tour, when asked how he created the boggling amount of sculptures crammed into his home. (Our mutual friends were with us, and he had agreed to photographs taken earlier by one of them, which are reprinted here).

Under his roof, there was no readily apparent place for rest. His environment and productivity suggested that the basic need for stopping and shutting down didn’t exist in his world.

He – like Ben Franklin and other insomniac geniuses – operated contrary to conventional wisdom. 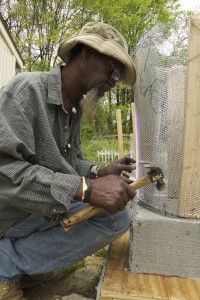 Just across town, at the Centers for Disease Control, insufficient sleep is considered a serious public health issue, tied to chronic diseases and vehicle accidents. At this week’s “Sleep 2012,” the annual meeting of professional sleep experts in Boston, their common enemy is insomnia. More sleep = more health.

For Mr. Imagination, less sleep was part of his calling. When night fell, there were too many things to make, to get out of his head and into three dimensions.

To recap his life, this from his obituary:

Warmack was born in Chicago in 1948, the third of nine children who gave church concerts together as the Warmack Singers. An inveterate collector of rocks, beads, trinkets, and myriad cast-off objects, Warmack started making and selling jewelry in his late teens. He also carved bits of bark, wood, and stone into faces that strangely resembled African tribal masks or Egyptian kings. 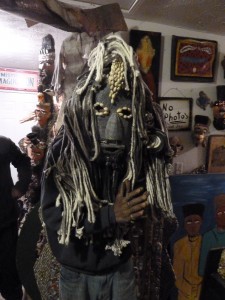 "Mr. Imagination" Gregory Warnack wears a mask that he made. This mask won first prize in the neighborhood Halloween costume contest. (Terry Stevick)

In 1978, a week after having a premonition that someone was going to kill him, Warmack was shot twice while selling his handmade jewelry on the street. He went into a coma and had an out-of-body experience that changed him forever. Reflecting that change, he renamed himself “Mr. Imagination.”

Mr. I began using new and different types of recycled materials in his art, most notably the bottle caps he is still best known for today.”  In 2002, Mr. Imagination left Chicago for Bethlehem, Pa., ‘to put down some roots and grow some vines.’ …

“Years ago my great aunt predicted I was going to be a minister, and in a way she was right,” Warmack said. “I think every artist is a minister and a messenger in a way.”

Perhaps Warmack met his basic needs by tapping into spiritual sustenance. God was a big part of Warmack’s personal history and art, though to appreciate it, viewers didn’t have to believe in a higher power.

The art itself – like most self-taught, outsider or visionary art – suggested communication with another world. Around the clock, the art came to be because Mr. Imagination couldn’t not create it. 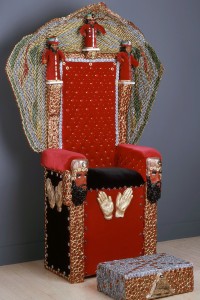 “Visionary art begins by listening to the inner voices of the soul,” the Baltimore museum website explains in its definition of the genre.

“Visionary artists don’t listen to anyone else’s traditions. They invent their own. They hear their own inner voice so resoundingly that they may not even think of what they do as ‘art.’ [They stay on the intuitive path of learning to listen to the small, soft voice within.” 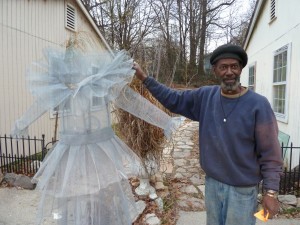 Gregory Warnack, a.k.a. "Mr. Imagination," collected a lot of salvage materials to turn into art. His home in northwest Atlanta was full of materials. (Terry Stevick)

In Warmack, that inner voice might just have been a tad bigger, a bit louder —  allowing “Mr. Imagination” precious hours for all the wondrous phoenix art he left behind.

Michelle Hiskey is a freelance writer and story coach based in Decatur. She can be reached at [email protected]