When I got a call Saturday telling me that the larger-than-life Herman Russell had passed away, it was hard to believe.

Even though he was just a month shy of his 84th birthday, Russell seemed to be one of those people who would defy the passage of time and be with us for years to come.

I guess one of the reasons it’s hard to accept his death is that Russell has been a fixture in my life since the early 1960s when I was a young girl. He and my father, I.E. Saporta, were in business together – Papa as the architect; Russell as the builder.

He would call the house so regularly, and I would answer the phone and take messages for Papa so often, that he. began calling me his secretary. 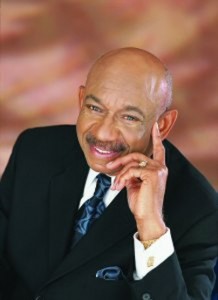 More than 50 years have passed, yet Herman Russell has called me his secretary ever since – a role I assumed I always would have.

But Russell must have known his days were numbered. After working on autobiography for more than four years, Russell finally published his book: “Building Atlanta: How I Broke Through Segregation to Launch a Business Empire” in April of this year.

At a series of book signings earlier in the year, Russell seemed intent to share the story and lessons of his life with his family, friends and younger generations.

On April 12, at a book signing at Billy and Sherry Linville’s home in Ansley Park, Russell wanted to remind his children, grand-children and great-grandchildren that he had “worked hard, stayed focused” and that they should “not let anybody discourage them from being what they want to be.”

He proceeded to talk about the prejudices he had faced growing up (being called the “N” word), and how he had been determined to succeed in business while being part of the civil rights movement and the Atlanta business community.

“When you have lived three generations, I’m 83 years old, I’ve seen a lot,” he said. “I remember when Atlanta was only a half million people. I know that now it’s more than six million. You know the art of giving because of what you will get in return.”

As Russell’s unofficial (at least unpaid) secretary, I was able to document key moments in his professional life as well as transitions at H.J. Russell & Co. As a business reporter and columnist for the Atlanta Journal-Constitution, Russell would turn to me when he would announce a change in leadership or succession at his company — which he did at least three times.

As the father of three children — Donata Russell Major, H. Jerome Russell and Michael Russell – who all worked as part of the family business, Russell tried different leadership scenarios before the company ended up naming Michael as the CEO; Jerome as the head of the company’s development arm; and Donata Major as head of Concessions International and the family foundation.

The fact that Russell was able to keep the family together through those sensitive transitions was a testament to his own leadership — where he emphasized the importance of family above and beyond all else.

It was in that spirit that I asked my “boss” in 2006 if we could do a story for the AJC about one of the many projects he and my late father had developed – Gartrell Court Apartments – before they were demolished.

The 106-unit affordable housing development just a few blocks away from the King Center was going to be redeveloped, but I wanted to capture the unique history that Russell and my father had shared in the early 1960s.

After initially meeting in the late 1950s at Georgia Tech, where my father taught architecture, Russell and Papa were brought together by a successful African-American developer — T.M. Alexander in the early 1960s — to build the now demolished University Plaza Apartments on Fair Street that housed the popular nightclub – the Birdcage.

Alexander was the developer; Papa was the architect; Russell was the builder. The two doughnut-shaped apartment buildings, built in 1963, were a novelty in Atlanta. Even Russell admitted during our interview he had been apprehensive about constructing round buildings.

“Your father was a brilliant architect who was always on the cutting edge,” he said at the time. “I was concerned with how much more difficult it would be to build it. But it worked out well. It made me a better a person.”

After the University Plaza Apartments, Russell and Papa formed a partnership — seeking grants from the U.S. Department of Housing and Urban Development to build affordable housing projects around town.

Their first joint venture came in the mid-1960s when they developed Etheridge Court Apartments, a 354-unit development in northwest Atlanta. And then came Gartrell Court in 1968.

But what made this so unique was that as far as Russell and my father could tell, they had formed the first minority-majority development joint venture in Atlanta’s history. Papa designed the apartments, Russell built them, and they were co-owners (Papa – one-third; Russell – two-thirds).

During our interview, Russell acknowledged that my father had helped him break through the racial barriers that existed for a black man trying to enter the business world in Atlanta in the 1960s.

“Sure it helped me because it broke the race barrier,” Russell says. “It showed that here were two people who believed in each other, came together and demonstrated that race didn’t have anything to do with it.”

To put it in historical perspective, their business partnership predated the election of Atlanta’s first black mayor Maynard Jackson by a decade. The controversial joint venture program established by Jackson in the building and operating of the new Atlanta airport was put in place 15 years later after Papa, Russell and Alexander had first teamed up on the University Plaza Apartments, and 13 years after Russell and Paper had jointly developed Etheridge Court.

“It raised a lot of eyebrows,” Russell said of their joint venture. “Your father may have caught more hell than I did.”

When I read Russell’s book, I was disappointed that there was no mention of his partnership with my father – a relationship that he had once told me was instrumental to his own success.

But that may be because their partnership ended up in litigation over disputes of ownership, management and money. Let’s just say Papa was not as astute a businessman as he should have been. He often was too trusting of others and not obsessed by money.

Despite their differences, Russell did share a story with me.

“The last time I saw your father before he passed, it was at a lunch somewhere, and we had the best time laughing,” Russell said. “You would have thought we had never had a moment of disagreement. That was the way your father was.”

Russell spoke at my father’s service at the Atlanta Botanical Garden in 1998, showing me that ties of friendship and family are the strongest bonds of all.

But perhaps the greatest lesson of love came from the Russells themselves.

In September 2005, Jerome Russell donated one of his kidneys to his younger brother Michael.

“Giving up my kidney was the greatest achievement I’ve ever done in my life,” Jerome said at the time. “It’s bigger than any project. It was giving life.”

This story of sibling love could have played out so differently. Two years earlier, Michael had been named CEO of H.J. Russell & Co. instead of Jerome, who had been serving as president and COO. It worked out okay because Jerome ended up running the development arm of the company, a business he really enjoyed.

Seeing his two sons at the hospital share a part of each other’s body was almost too much for the elder Russell to handle.

“Can you imagine having your two sons going for major surgery at the same time?” Herman asked rhetorically at the time. “I’ll never forget that moment when they made contact. It was very emotional because Jerome was so happy when he saw that Michael was doing OK. I had to move away three or four times because I didn’t want people to see my watery eyes.”

So Herman Russell, as your loyal and faithful secretary for more than 50 years, this is the way I choose to remember you.

A footnote: Five days after I had written this column, I picked up the autobiography that Herman Russell had sent special delivery to my office. On the opening blank page, he had written the following inscription:

“Maria, I recognized your talent at age 6 when you were my secretary! I hope you enjoy my story. Love, H.J. Russell”