The Nature Conservancy — Georgia unveiled a New Year’s present Thursday when it announced that it has purchased 6,277 acres along the Altamaha River in Wayne County.

The tract, known as Boyles Island, has been on the Nature Conservancy’s “wish list” for decades, according to the press release issued by conservation organization.

“I grew up in this area and actually learned to shoot a shotgun on Boyles Island at the tender age of eight, so I am personally proud of this land protection success,” said Mark Abner, director for the Nature Conservancy in Georgia. “A multi-partner effort made this transaction possible, and we are grateful to all the supporters who continue to help the Conservancy realize our vision on the Altamaha River and Georgia coast.”

Boyles Island spans 8.7 miles of the Altamaha River and features an extensive floodplain forest of oak-hickory bottomland and cypress-tupelo swamp, with isolated ridges of live oak and spruce pine, as well as creeks, sloughs and oxbow lakes. 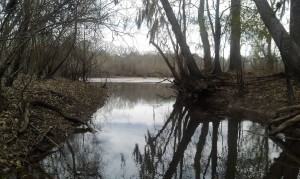 Boyles Island (Photo is courtesy of the Nature Conservancy – Georgia)

This tract adjoins more than 106,000 acres of land that is already protected, filling a gap on the west side of a more than 40-mile long corridor that protects habitat along the Altamaha River. The contiguous corridor helps ensure the viability of many important species, including Atlantic and shortnose sturgeon, prized recreational and commercial fisheries from the river channel to the saltwater coast; and bird life such as the rare swallow-tailed kite and numerous other migratory birds.

Protected land along the river helps the Georgia coast as well, improving water quality before it reaches the estuary and allowing natural, seasonal variations in water quantity and temperature to endure.

The Nature Conservancy is purchasing the land from Rayonier for $8 million. The Conservancy will also sell a restrictive easement, valued at $3.1 million, to the U.S. Marine Corps through the Readiness and Environmental Protection Initiative (REPI) program, which was created by the Office of the Secretary of Defense and is used to create land-use buffers between communities and military activity that can also protect habitat and provide recreational lands.

The Georgia Department of Natural Resources (DNR) will purchase the land for $4 million from the Nature Conservancy in two phases over the next year, ultimately creating an extension of the Penholoway Swamp Wildlife Management Area, which is open to the public for recreation.

Funds to purchase the land came from a variety of sources. The transaction offered an opportunity for the Nature Conservancy to use the Georgia Land Conservation Program’s Revolving Loan Fund, a low-interest loan program designed to help protect high-priority conservation lands administered by the Georgia Environmental Finance Authority.

DNR has assembled funding from a U.S. Fish and Wildlife Service Coastal Wetland grant, Knobloch Family Foundation grant, and state bond funds for its two-phase acquisition from the Conservancy. Together with the Marine Corps easement purchase, these funds will offset all but about $1 million of the purchase price, which the Conservancy is raising from private sources.

“Thanks to the many partners and supporters who worked tirelessly on this project, the citizens of Georgia will have new lands for outdoor recreation and Boyles Island will be preserved for generations to come,” said Mark Williams, DNR commissioner.

The Boyles Island tract has a long history as a private working forest, dating back to at least the 1930s when it was owned by Savannah River Lumber Company. For the past 40 years it has been owned and managed by Rayonier, which has periodically harvested hardwood timber while relying on its highly-fertile flood-nourished soils and natural revegetation patterns to sustain such activity.

“Boyles Island is an ecological treasure,” said Paul Boynton, chairman, president and CEO of Rayonier. “Its diversity of habitat and critical importance to migratory birds, together with its location connecting other public conservation lands, make it extremely unique. We are delighted to again work with the U.S. Department of Defense, the Georgia Department of Natural Resources and the Nature Conservancy to successfully protect a special property. This transaction takes Rayonier’s conservation land program to well over 150,000 acres – more than 30,000 acres located in southeast Georgia.”