Almost six years after moving its headquarters from Ohio to Georgia, financial technology company NCR Corp. is relocating again, this time to Midtown, bringing up to 3,500 to 4,000 jobs into the city.

NCR Corp. (NYSE: NCR) reported late Tuesday it will occupy a site at Centergy North at 8th and Spring streets, putting the company in the innovation district blossoming around Technology Square, anchored by Georgia Tech. NCR also plans to maintain a “significant” presence at a second campus in the northern suburbs. 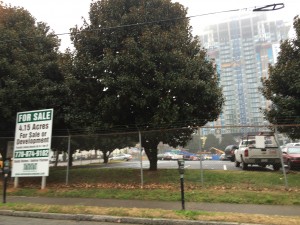 The new Midtown campus will be ready in late 2017 or early 2018, the company said. The current site plan calls for a mix of 8-to-10-story buildings with up to 1.5 million square feet of office, hotel and potentially retail space to serve the city’s booming startup community around Georgia Tech. NCR has an agreement to buy the entire 4-acre property.

While a location for the campus in the northern suburbs is yet to be finalized, it too is expected to open in late in 2017 or early 2018.

“Creating a state-of-the-art campus in midtown Atlanta near Georgia Tech marks an important step in NCR’s reinvention as an exciting and important, global technology company,” said NCR Chairman and CEO Bill Nuti, in a statement.

“You can count on your hand the number of successful technology company reinventions that have been executed over the last 100 years and NCR is amongst them,” Nuti continued. “NCR runs global commerce and we make the everyday easier as consumers connect, interact and transact with business. We are extremely proud of the important innovations we create and the valuable work done on behalf of our customers around the world right here in metro Atlanta.”

“I want to extend a warm welcome to NCR Corporation, a global leader in its field, to the City of Atlanta,” Reed said in a statement after the company made its official announcement. “The new global headquarters will bring 3,600 jobs to the city, and construction of the headquarters will drive additional economic development, adding more vibrancy to a City already buzzing with energy.”

Reed said NCR’s decision was further evidence of a trend by companies to move to more urban locations.

“Every day, businesses are voting with their feet and choosing the City of Atlanta as the place to bring their dreams and build their businesses,” he said. “The best companies in the world are building their brands here, strengthening our economy and confirming Atlanta’s place as a leading city for business.”

In 2009, NCR relocated its corporate headquarters from Dayton, Ohio, to Duluth, Ga. Last year, Atlanta Business Chronicle reported NCR was in talks about developing a campus. At the time, the company was looking at land in Midtown, now a proposed mid-rise urban campus at Centergy North, a roughly 4-acre site at Spring and 8th streets.