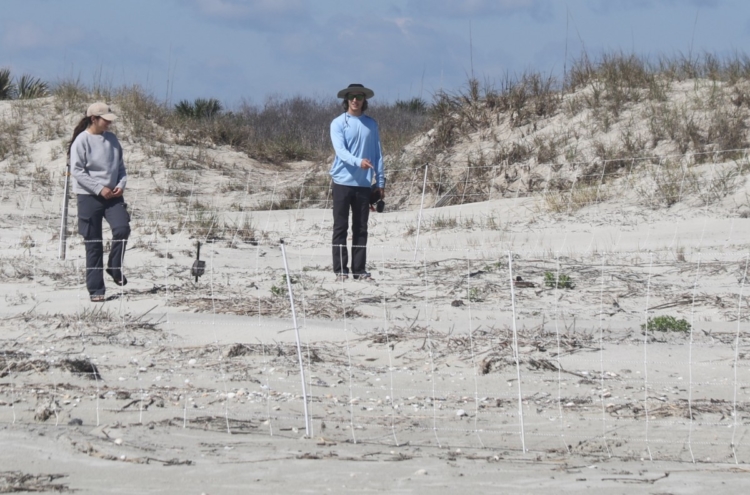 In the push and shove of the food chain, two bird species on Georgia’s coast received help from researchers who prevented coyotes and raccoons from eating nesting birds, their eggs and hatchlings. 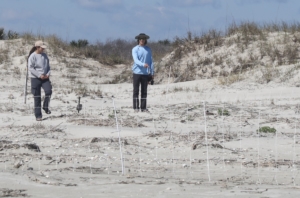 The birds are easy pickings for furry mammals when the birds are trying to bring forth the next generation. The top threats for birds during their reproductive season are tides washing over nests, human disturbance and being eaten by mammals.

The two species getting aid are Wilson’s plover and American oystercatcher. Both are common sights along the Georgia coast. Both are listed as shorebirds of concern, according to a statement from the Georgia Department of Natural Resources. Program funding was provided by a $75,000 grant from the National Fish and Wildlife Foundation, plus a one-for-one matching grant from partner agencies of Little St. Simons, The Nature Conservancy and Cumberland Island National Seashore.

“In both cases, we moved the needle on one of the three biggest threats for shorebirds,” said Tim Keyes, a DNR wildlife biologist.

Lauren Gingerella, a graduate student at the University of Georgia, coordinated preservation efforts for Wilson’s plover on private Little St. Simons Island, and for American oystercatchers on Cumberland Island.

Gingerella seems to be carving a niche in the study of plovers. Previously she worked on a project to track piping plovers in New Jersey, according to a report by Conserve Wildlife Foundation of New Jersey.

The non-lethal devices for protecting bird nests that Gingerella deployed are borrowed from age-old techniques to keep predators at bay.

Screen cages proved a success over Wilson’s plovers’ nest in two nesting seasons. Gingerella placed screen cages over about 50 of the 200 Wilson’s plover nests to see if they would repel raccoons; coyotes aren’t found on Little St. Simons. 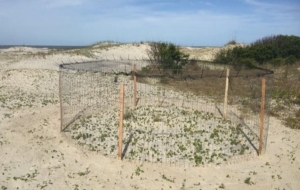 A cage was installed to determine its effectiveness in protecting nesting Wilson’s plovers. Credit: Lauren Gingerella via GDNR

Cages aren’t the no-brainer solution they may appear to be.

Concerns included parents actually abandoning their nest rather than navigate a cage, and whether predators would be attracted to nests, eggs and chicks that otherwise would be hidden by the natural camouflage of their surroundings, Keyes said. Results of this test proved the cages are successful.

The task of protecting nesting was a bit more tricky on Cumberland Island. It’s home to both coyotes and raccoons, and both prey on nesting birds and their progeny.

Electric fencing powered by solar energy was installed around six oystercatcher nests. Progress was monitored by staff from DNR and the National Park Service.

Results were positive for the birds. A total of seven chicks hatched in five of the six nests. That compares to more than six in 2018’s record high breeding season for American oystercatchers; two chicks in 2017, and none in 2016, according to DNR.

Keyes observed that cages and fencing aren’t the solution for all the challenges that raccoons and coyotes present to nesting birds. The mammals adapt and can be expected to find ways to eat the nesting birds, their eggs and offspring. The tests did show that the devices can be another tool.

“There is no single silver bullet for predators,” Keyes said. But, with American oystercatchers, “in the right situation we can use non-lethal predator management to significantly increase productivity.”

In addition to the programs to protect nesting birds, the grant provided for a survey of banded oystercatchers, mapping of horseshoe crab spawning areas – which are a critical food for the federally listed Red Knot species of peeps, which migrates every year from its breeding grounds in the Arctic to Tierra del Fuego, in South America, according to a report by allaboutbirds.com. 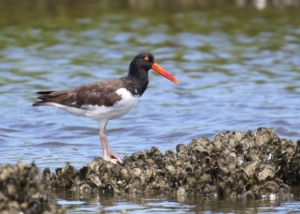 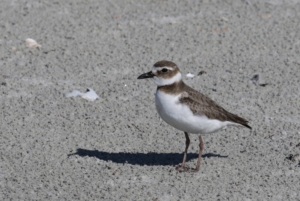 Wilson’s plover were able to adapt to a cage installed to protect their nests, eggs and offspring from predators. Credit: Tim Keyes/GADNR