By 2024, folks will have a new reason to visit the Chattahoochee River. (Photo courtesy of The Trust for Public Land.)

Residents of Atlanta and the metro area have likely been hearing a lot of buzz about the city’s neighboring river — the Chattahoochee — and local leaders’ visions of how to better use the natural oasis. Their solution? The Chattahoochee RiverLands, including its Camp and Paddle Trail.

The Chattahoochee RiverLands is a multi-generational initiative by The Trust for Public Land (TPL) to create 100 miles of an uninterrupted linear network of trails, parks and green spaces from the Buford Dam to the Chattahoochee Bend State Park.

While the team and partners are working to secure space along the Chattahoochee, the TPL crew is also working on its Camp and Paddle Trail. 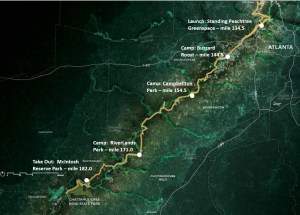 The RiverLands Camp and Paddle Trail. (Map courtesy of the Trust for Public Land)

The trail spans a 48-mile stretch of the Chattahoochee River, going from the Standing Peachtree Greenspace in Atlanta to McIntosh Reserve Park in Carroll County. The new trail and campsites are expected to debut in 2024.

The trail was proposed early in the planning process, according to Chattahoochee Program Director Walt Ray, gaining a lot of traction through two years of public engagement sessions.

The trail will kick off with a kayak launch site at the Standing Peachtree Greenspace, with three campgrounds along the river at Buzzard Roost, Campbellton Park and RiverLands Park. Each campground will include about 10 to 20 campsites. 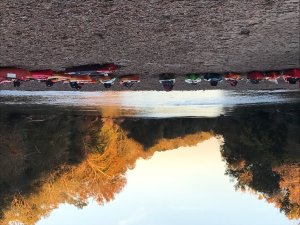 Paddle to Buzzard Roost Island for a break from the bustle of metro Atlanta. (Photo courtesy of The Trust for Public Land.)

The first site, Buzzard Roost, will only be accessible via kayak because it’s an island, but visitors can reach the other two campgrounds via water transit or car.

The goal here is to give folks the opportunity for a multi-day kayaking excursion, spanning the whole 48 miles and spending a night at each campsite. For folks on a tighter schedule, the new trail will also be accessible for day trips or a night spent in the woods falling asleep to sounds of the rushing river.

The project is slated to cost about $3 million, funded primarily through a $2,260,000 grant from the Georgia Department of Natural Resources, with TPL raising philanthropic funds to cover the remainder of the bill.

The TPL team will be making some changes to the areas to bring the Camp and Paddle Trail to fruition.

The Standing Peachtree Greenspace currently has a makeshift kayak launch site, but TPL will build a site that is easier and more accessible to use. 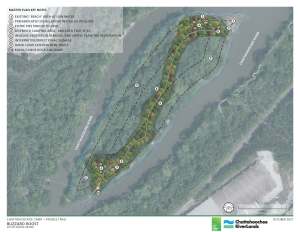 Site plans for Buzzard Roost. (Photo courtesy of The Trust for Public Land.)

Buzzard Roost will offer primitive sites and won’t include amenities like bathrooms in an effort to tread lightly on the island. But the space will receive a few upgrades, including a floating dock and a trail system on the island.

In addition to campsites and a boat dock, the Campbellton and RiverLands Parks will also feature new picnic shelters and restrooms with showers. 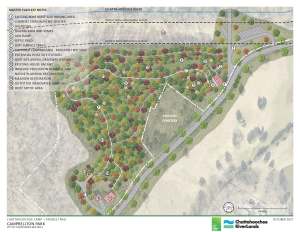 Site plans for Campbellton Park. (Photo courtesy of The Trust for Public Land.)

RiverLands Park, the last campground on the trail, will finally come to life through this initiative. The City of Chattahoochee Hills has owned the park for some time, but it has remained fenced off and unopened as an official park.

Once opened to the public, the various local jurisdictions will be responsible for the upkeep of their new campgrounds.

Environmental impact is top of mind for this project, and the TPL team doesn’t anticipate having to cut down any trees to build the campgrounds — certainly no old-growth — while also making an effort to remove invasive privet that has overtaken the areas.

“We’ve been really careful with the whole Riverlands, and providing an ecological refuge for the region is one of our big four goals,” Ray said. “As we introduce people to the river, let’s not do so at the expense of the ecology.”

Ray envisions the RiverLands project as the metro version of the Atlanta BeltLine, bringing together folks of all walks of life to enjoy the outdoors. 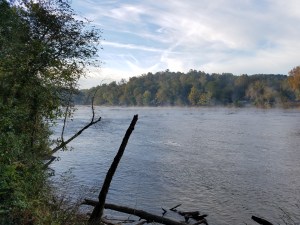 The McIntosh Reserve Park offers striking views of the Chattahoochee River. (Photo courtesy of The Trust for Public Land.)

“Waking up in a tent, everything is quiet, the birds are chirping and the fog is drifting over the river – it’s magical,” he said. “I’m hoping that the Camp and Paddle Trail will really invite everyone to develop a personal relationship with the Chattahoochee River, which is the region’s greatest ecological asset.”

He continued: “It’s a unique opportunity to leave a real legacy for the metro Atlanta region. I think it’ll help redefine Atlanta’s brand or the region’s brand. Right now, we’re known for our interstates. I’d rather be known for our outdoor adventures.”