By Guest Columnist ABLE MABLE THOMAS, a resident of the English Avenue community and the newly elected state representative for District 56

Go Falcons! Let me first state that I am a Big Falcons Fan and even attended the Falcons 1999 Super Bowl Game in Miami. And I will be attending the Falcons’ 2013 Super Bowl win. However, not everyone who lives near the Georgia Dome is as fortunate as I am.

Imagine what it is like to spend your entire childhood in the shadow of the biggest sports facility in Georgia and never have the opportunity to attend a football game or other sporting event.

Imagine what is it like to be a senior citizen in the shadow of the Georgia Dome and have to go to the hospital or grocery store on game day, and you or your driver are not aware of the game and turn onto Northside Drive and are diverted by officers and may be spoken to inappropriately.

These are just two examples of the types of challenges that can be corrected for a better community working relationship with the Falcons organization, Georgia World Congress Center and the City of Atlanta. These concerns affect the community adjacent to the stadium, regular commuters traveling the Northside Drive corridor, and the surrounding neighborhoods of English Avenue, Vine City and Castleberry Hills. 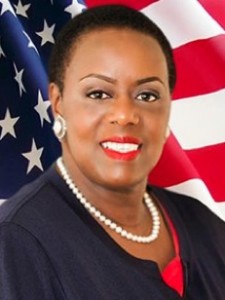 Information is not flowing in a timely fashion. I know a stadium report was done in March 2012 and a subsequent traffic study. Name 10 individuals in the area who have a hard copy or e-copy of either report, in a form that can be easily distributed to residents. By now there probably is a newer version of both online due to many calls from the public for more transparency.

In another example, only Friday, Dec. 7, was I notified by the chair of our Neighborhood Planning Unit that a terms of agreement document was going to be voted on by the board of directors of the GWCC on Monday, Dec. 10, which will set the stage for the finalization of the stadium deal.

Here are seven examples of the impacts, and proposed mitigations, that we believe are of concern to the community. These items were included in a report we formally presented a year ago to Frank Poe, executive director of the GWCC. We have not received a formal response.

Impact: First, all businesses and revenues are inside the stadium.

Mitigation: Allow vending opportunities for Neighborhood Planning Unit-L (NPU-L) residents inside and outside of the stadium, including subcontracts, as well as joint ventures and job opportunities for construction workers. Create an entrepreneur micro loan program for NPU-L resident owned micro businesses.

Partner with existing development organizations, Morris Brown College, Central Atlanta Progress and existing commercial businesses to develop a boutique hotel and a small business incubator within NPU-L. Additionally, create a management internship program for residents. Partner with community to create a minimum of one hundred jobs for youth during summer and stadium season.

Impact: Under the heading of public safety, the potential for limiting ingress and egress of emergency vehicles and residents needing to travel for medical care during stadium events.

Mitigation: Resident parking permits should be made available to residents free of charge by amended ordinance by the city of Atlanta, existing parking ordinances enforced, and new ones created to meet new conditions fostered by new Sports facility.

Impact: Gentrification, the potential for land use change from residential to high density commercial, other than that proposed and approved in the neighborhood redevelopment plan.

Mitigation: Approved and recommended zoning and land use in neighborhood plans be adhered to and any proposed changes go before neighborhood associations to preserve the integrity of neighborhoods and lessen any negative effects of gentrification or eminent domain.

Impact: Rude behavior of police officers toward residents/competency of officers to interact with residents in the process of directing traffic, etc.

Mitigation: Recommend sensitivity and conflict resolution training for officers. It is always better to be polite and professional.

Mitigation: Storm water runoff should be accommodated for the new stadium with underground retention systems and engineered to prevent storm water overflow into the communities.

Impact: Encroachment into the neighborhood with parking, tailgating, vandalism, trash and debris left behind.

Mitigation: Parking decks built with roof tops for tailgating. Not allowing limited neighborhood green space for additional tailgating. Create business opportunities, such as Westside Ambassadors to assist the GWCC and city of Atlanta, wherein, residents would be responsible for clean-up, recycling and maintenance of esthetics and continued beautification of the community and area east of Northside Drive. Additional police presence inside neighborhood to prevent car break-ins and lessen vandalism and thefts in area.

This list is not all-inclusive. As a resident and active member of NPU-L Economic Development Committee, I know we have additional comments and recommendation that we have shared with the executive director of the GWCC, without receiving a formal response. Don’t get me wrong, we have had dialogue with Mr. Poe, yet as a community we need more than courteous discussion. We need transparency, input, a seat at the table, a community benefits agreement, and mitigation.

We demand more than consideration. We demand active participation and partnership.

In closing, I am encouraged. I recently was sent an article of the April 20, 2012 Atlanta Business Chronicle where Falcons owner, Arthur Blank pledged to contribute his wealth to philanthropic causes.

“I am more committed than ever to making a difference through philanthropy,” Blank stated. “The needs in our society are more profound than at any point in my lifetime. The gap between the rich and poor in America is growing. Philanthropy alone cannot repair all of social injustices in our country or the world. It can, however inspire good will, spark innovation and provide thought leadership”.