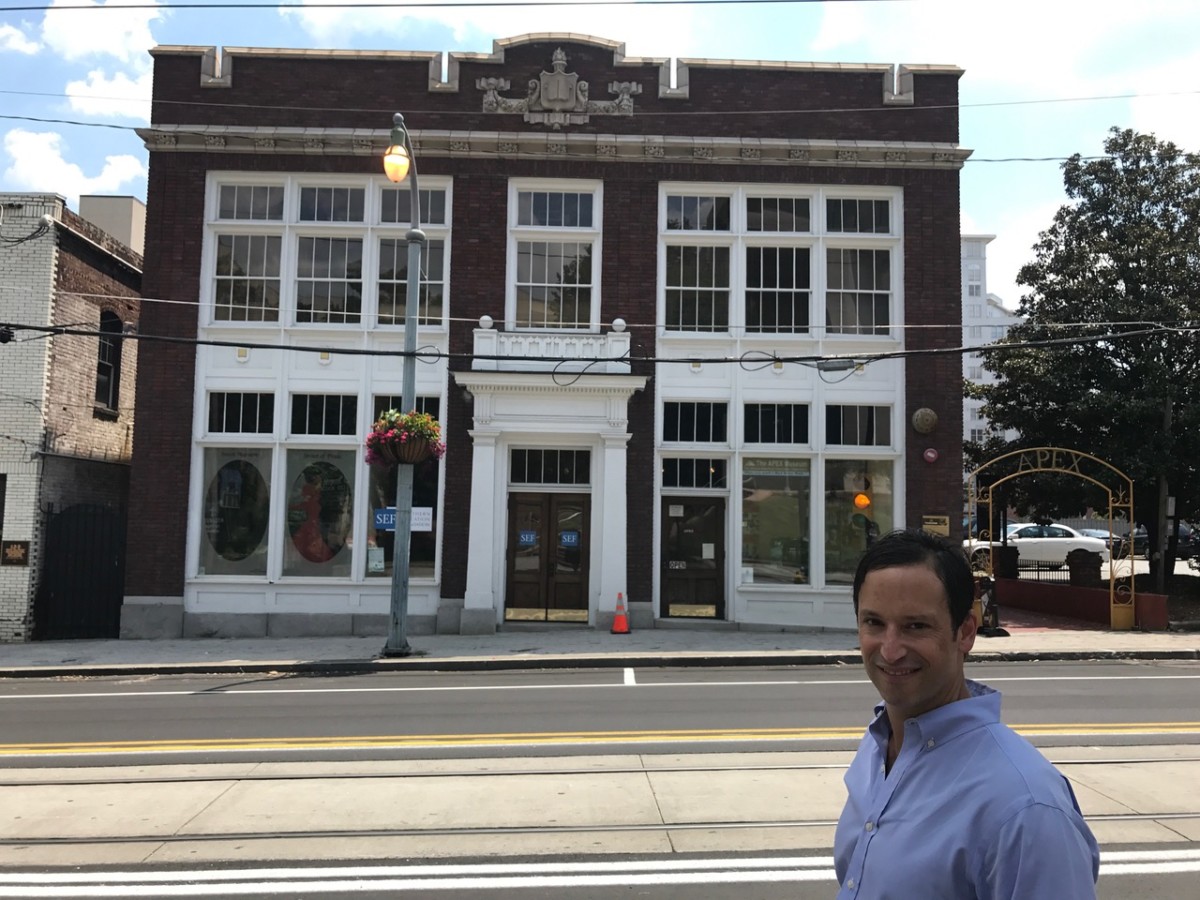 Historic preservation developer Gene Kansas in front of the 135 Auburn Ave. building, which he and a group of investors have acquired to turn into a “Constellations” project on the second floor (Photo by Maria Saporta)
Share66
Tweet
Share297
Pin
Pocket
WhatsApp
Buffer2
Email
Reddit
365 Shares

By Amy Wenk and Maria Saporta
As published in the Atlanta Business Chronicle on August 4, 2017

An Atlanta developer is planning an innovative co-working space along one of Atlanta’s most historic streets — a project that’s already lured high-profile investors including top Home Depot executives. 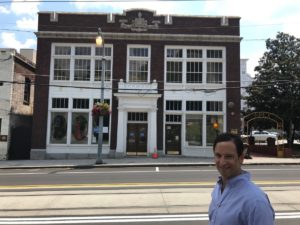 Historic preservation developer Gene Kansas in front of the 135 Auburn Ave. building, which he and a group of investors have acquired to turn into a “Constellations” project on the second floor (Photo by Maria Saporta)

Gene Kansas Commercial Real Estate plans to open Constellations, a $2 million project that will offer “culturally-inspired” workspace with the hope of bringing together great minds who care about making a difference in the city.

It’s coming to the second floor of the circa-1910 former Southern School Book Depository at 135 Auburn Ave., a building that was designed by famed Atlanta architect Neel Reid.

Constellations will replace the Southern Education Foundation, which is relocating to a new space downtown.

Construction is expected to start in December, with tenants moving in around April 2018.

It will also donate two field offices to community-oriented nonprofits for two years, and 25 memberships to local community groups for two years. In total, it will offer nearly $135,000 worth of space for free.

It will fill its remaining space with small companies and independent contractors. 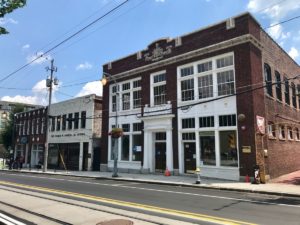 Photo shows the proximity of the 135 Auburn Ave. building to the other recent project Gene Kansas did – the restoration of the Atlanta Daily World building (blue round sign) (Photo by Maria Saporta)

“As our name suggests, Constellations will be a place for stars to come together and shine, informing the bigger picture by their nature and the crossing of paths,” Gene Kansas said of the project that will sit along the Atlanta Streetcar line. “More than shared workspace, we are interested in shared values.”

The project has already scored top investors including Carol Tomé, chief financial officer of The Home Depot Inc., and her husband, Ramon, who formerly worked for the Georgia Department of Natural Resources and today is a board member with the Community Foundation of Greater Atlanta.

“Ramon and I love Atlanta and the state of Georgia,” Tomé wrote in an email to Atlanta Business Chronicle. “We believe in preservation … so Constellations was a perfect fit. We were able to invest in a project housed in a historic building that we intend to preserve, partner with creative and community-minded people, and bring us closer to the community we love.”

“Our team is diverse, experienced, and talented,” Kansas said. “Constituted around a common passion for difference-making, we are impact developers with a strong track record in both business and philanthropy.”

That will help fund the renovation of the building’s facade and its second floor. 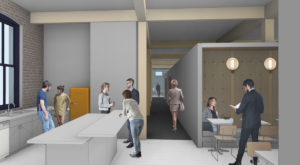 A rendering of the break room at Constellations (Special)

Among its features, Constellations will include a variety of workspaces, a conference room, a podcast studio, the “North Star” library, and the “Milky Way” coffee bar.

To carry its celestial theme, Constellations is planning a big website launch on Aug. 21, the same day as the total solar eclipse.

Kansas is the same developer who saved the historic Atlanta Daily World building along Auburn Avenue, just a few doors down from his new project.

From 1928 to 2008, it was home of one of the oldest daily African-American newspapers in the U.S. But it fell into disrepair when a tornado destroyed its roof. Other developers wanted to tear it down.

But Kansas and his business partners acquired the building, turning it into a mixed-use building with two apartments and new locations of Condesa Coffee and juice bar Arden’s Garden.

A rendering of the Milky Way Coffee Bar at Constellations
(Special)

In fact, a love of community and its preservation has long defined Kansas’ career — from being a long-time mentor with Big Brothers Big Sisters to creating and hosting Sidewalk Radio on AM1690.

His clients over the years have included the Atlanta History Center, Zac Brown Band and Atlanta Beltline visionary Ryan Gravel, among many others.

Previous Article
Happy news on the refugee front, in Clarkston
Next Article
Forget the symbols of the Confederacy; instead let’s preserve our African-American heritage